Edmund Dulac and his world of fairy tales : The Tribune India

Edmund Dulac and his world of fairy tales 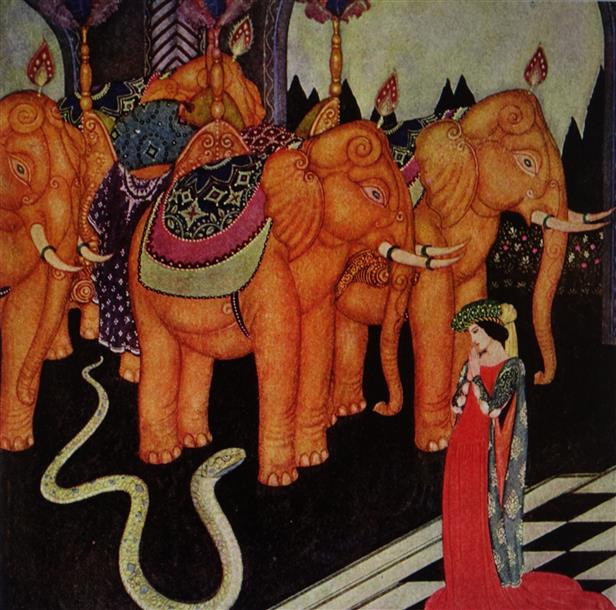 From an Italian tale: 'The Serpent Prince'. All illustrations are by Edmund Dulac

(His work reminds one of) things seen in a vision or a mirage; or traced by the fancy of a child in the lichens on the wall, the water discolourations upon a ceiling, or the light shining through a broken crumpled shade; or, even like the things we try to decipher in the leaping flames and glowing embers of an open fire…

— From a description of Edmund Dulac’s work

When I examine myself and my methods of thought, I come to the conclusion that the gift of fantasy has meant more to me than any talent for abstract, positive thinking.

Imagine yourself as a child, sitting by the fireside, listening to a tale being told by your snuggly old dadi as you sidle up to her. And imagine the tale beginning a little like this: “The old wife sang merrily as she sat in the inglenook stirring the soup, for she had never felt so sad. Many, many years had come and gone, leaving the weight of their winters on her shoulders and the touch of snow on her hair without ever bringing her a little child. This made her and her dear old husband very sad, for there were many children outside, playing in the snow.”

There is enchantment in the imagined scene, and it is this enchantment which Edmund Dulac (1882-1953), one of the premier figures in ‘the golden age of children’s gift books’, as he has been called, sought to capture in his illustrations. Here, at home, we are unlikely to know much about him — he was born and educated in France, but became naturalised as a British citizen, earning the nickname l’Anglais (the ‘Englishman’ in other words) after a while — but one learns that he kept ‘conquering’, with his magical illustrations, a whole generation of children and adult readers for years.

Dulac’s range was remarkably wide. He did not begin with painting fairy tales. When in England, the first work which he illustrated — which incidentally shot him to fame almost instantly — was that perennial classic ‘Jane Eyre’. Very quickly, he became a leading name in the book arts, producing illustrations for the Brontë sisters and popular magazines. Annual exhibitions of his drawings and paintings were held at the Leicester Galleries, London, which led to both the European and American art world being drawn to him and his prodigious talent. One of the critics described his work as “rich with poetry and imagination, and strong in the possession of that decorative element which renders a picture universally pleasing”. In their essence, Dulac’s themes ‘tended towards the fantastical’, and he was as drawn to the ‘Arabian Nights’ and the ‘Rubaiyat of Omar Khayyam’, as to the Brontes. Art Nouveau, with its unending tendril-like lines and lithe figures, wispy like smoke, was at that time a dominant style in England, and Dulac kept leaning on it. But his imagination was his own, and he kept embroidering, refining, and reaching out nearly all his life.

It was fantasy, which is so central an ingredient of fairy tales, that led Dulac to be drawn to them, one can be certain. Consider, for instance, a fairy tale — he was a collector of tales himself — like ‘Snegorotchka’, a tale from Russia, the opening words of which I have cited above. When the childless old couple decide to entertain themselves by making a snowman — in fact, a little snow maiden — and suddenly their sculpture starts turning real and slowly emerging from snow into the prettiest, daintiest little girl that anyone ever saw, the impossibility of it, the astonishment and the delight apart, is what Dulac must have been enchanted by before he sat down to illustrate it.

Again, in the ‘Tale of the Serpent Prince’, originally written by an Italian poet long ago, he must have found great fantasy. For, the tale speaks of a poor forester’s wife who finds a tiny serpent in her firewood. She is startled but then the serpent offers himself up for adoption by this kind-hearted woman. The serpent grows — ‘as children do’ — and soon demands a wife. And not just any wife! He must marry the king’s daughter. Surprisingly, the king agrees to meet this demand but he has a condition. “I will give my daughter in marriage only if the adopted son-serpent can turn all the fruit in the royal orchards to gold.” Will that happen? Dulac, while illustrating the tale, lets his imagination of the king’s own riches roam in the direction of India or Persia and brings in phalanxes of elephants laden with riches.

Little known is the fact that Dulac also produced portraits, caricatures, posters, tapestries, carpets, furniture and — as a friend of the poet WB Yeats — some theatrical props. He also designed stamps, bank notes and proposed coinage. But, without doubt, his first love remained the illustration of fairy tales.

In the times in which Dulac was active, the world saw two wars. And with them at the back of his mind, he collected a number of tales and published them, but only tales that belonged to the ‘Allied Nations’: thus, England, France, Russia, Holland, Belgium and the like. One of the tales he illustrated was that of ‘The Seven Conquerors of the Queen of the Mississippi’, which, as some say, was subtle propaganda, aimed at persuading the United States to join the war on the side of the Allies. But one does not talk here of politics: it is the soaring, rich imagination of Dulac that is the subject. And that imagination is of the kind which belongs to the poet, the writer, the artist.