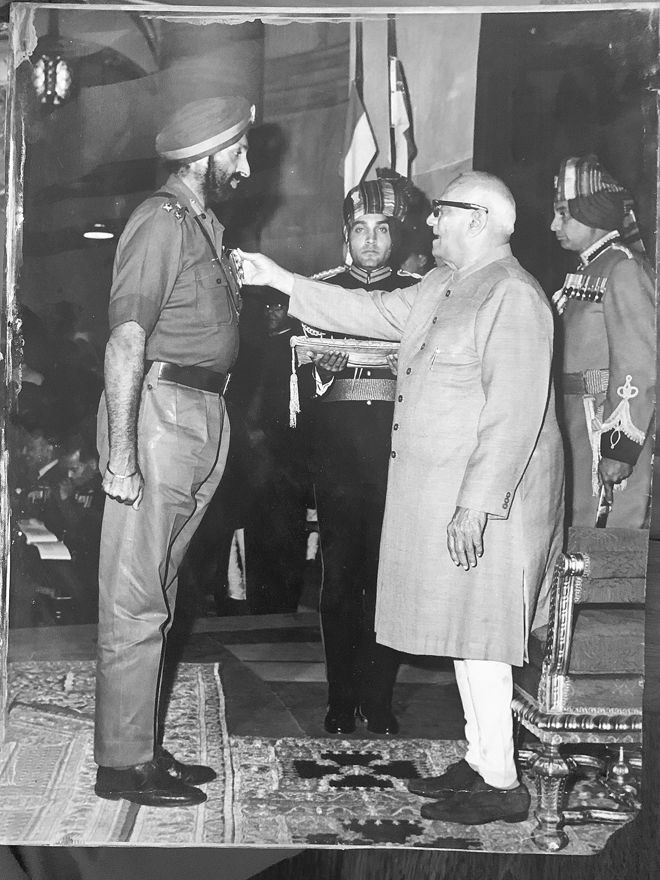 A squat tree bearing large jackfruit sat in the middle of the platform in April 2008 when the Calcutta-Dhaka passenger train called the Maitree Express was revived that month for the first time since Partition. Bengalis on both sides of the border joked that the fruit on one side is fatter than the other. At Darsana on the India-Bangladesh border where the luxuriant jackfruit now flowered, there used to be a pillbox, a machine gun barrel pointed towards India.

A grainy black-and-white photograph from newspapers of December 1971 shows five men in Indian Army uniform on the platform of the railway station, Darsana Halt. The standing man in the middle, capless, hands in pockets, was the commander of the 41 Mountain Brigade that took Darsana from the Pakistan army, Brigadier Anthony Herold Edward Michigan — Tony Michigan to his friends. Another officer was Lt Col Chitoor Venugopal, who commanded the 5/1 Gorkha Rifles. Both officers rose to the rank of Major General in later life.

Along with Brigadier (later Lt Gen) Joginder Singh Bakshi, who was commanding further north, and Havildar (later Honorary Captain) Bir Bahadur Pun, who served in Col Venugopal’s battalion, the four Maha Vir Chakra awardees illustrated what it took for them to wage battles in built-up (urban) areas in a country that was (and is) largely rural and watery.

In the areas of the border with the erstwhile East Pakistan, rivers, streams, ponds and ‘bils’ — marshes — were natural obstacles. Across one such ‘bil’ from Balurghat in West Bengal’s South Dinajpur district was a Pakistani post. The observer reported to his senior one morning in December that the Indians were sending tanks towards him.

“You must be mistaken in the fog,” he was told over the radio. “They must be buffaloes.”

“Except that,” he said, “these buffaloes have 100 mm guns that are taking shots at my positions.”

There was pell-mell in the Pakistani ranks. Brigadier Joginder Singh Bakshi — Jogi — had sent a troop of PT-76 light tanks at the head of his infantry from the 340 (Independent) Brigade for the first of a series of battles, that was to conclude with the capture of the Pakistan brigade headquarters in Bogra, in the north-west sector of East Pakistan.

About a year before that, in 1970, Bakshi was leading operations against insurgents in Nagaland and Mizoram. “You must learn from Jogi how to command a paltan in counter-insurgency operations,” Manekshaw had said at an infantry commanders’ conference.

By December 1971, Bakshi had switched roles, leading a brigade into urban warfare. His brigade, one of four in the 20 Infantry Division, was initially reserve. It was tasked to action first for Pirganj and later for Bogra after an attempted link-up failed because of stiff Pakistani resistance.

This was the area where the Pakistan army refused to lay down arms on December 16 when Gen AAK Niazi had signed the instrument of surrender.

“The 340 Brigade resumed advance to Pirganj and secured the north bank of the Karotoya (river) by December 10, but the southern bank was held by the enemy very strongly,” wrote KV Krishna Rao in his book “Prepare or Perish: A Study of National Security”.

The 5/1 Gorkha Rifles that led the charge to Bogra “poised itself behind enemy lines and turned its flank”, according to Lt Gen JBS Yadava, who retired as the Deputy Chief of Army Staff. The battalion was conferred Battle Honours Bogra.

“Between December 7 and 16, 1971, the brigade under his (Bakshi’s) leadership launched a series of successful attacks and captured a number of well-prepared enemy localities, culminating in the capture of Bogra, and by his daring execution outwitted the opposing forces breaking their resistance and capturing a large number of men and equipment, including the commander of 205 Brigade of the Pakistan Army,” Brigadier Bakshi’s citation noted.

A few hundred kilometres south of Bakshi’s position, the brigade led by Tony Michigan had a different task. It was already seeing action before the formal outbreak of hostilities on December 3.

By the end of November, Brig Michigan had positioned his troops on the western periphery of the Jessore sector. Jessore was the second most important urban centre after Dhaka in the region of East Pakistan bordering West Bengal.

Michigan’s objectives were Uthali and Darsana on the border and then a dash to Jhenida, 46 km from Jessore. All of these, unlike the countryside, were fortified positions, covered by Pakistani artillery and armour.

Michigan had been asked to capture Darsana by last light of December 4, a day after the formal declaration of war. After raids on Uthali, though, he had to regroup his forces. For this, he personally scouted the zone in the face of machine gun fire. Before that, the brigade had secured Pakistani border outposts.

“Brigadier AHE Michigan was commanding a mountain brigade… In the attack on Uthali, a strongly fortified and heavily defended enemy position, when his troops were surrounded by enemy automatic and tank fire from three sides, he took personal control of the situation under heavy enemy fire. He conducted the battle with cool courage and disregard for his life and so inspired his troops that they took the objective by storm. Later, he launched the main offensive on Darsana and by sheer offensive spirit and personal example inspired his troops, who broke through a devastating hail of machine gun, artillery and mortar fire and gained a decisive victory.”

In the area of responsibility of the II Corps under Lt Gen TN Raina, there were two axes to advance. The divisional commander, Maj Gen MS Brar, opted for the shorter route through Jibannagar-Kotchandpur-Kaliganj-Jhenida-Faridpur. This route was held up by Pakistani pillboxes and defences at Darsana.

When Venugopal reached with his men, he found the town besieged by the 22 Rajputs, but the Pakistan army was keeping them at bay.

“Lieutenant Colonel Chitoor Venugopal was commanding a battalion of Gorkha Rifles during the operations on the Eastern Front. On December 4, the battalion came up against well fortified enemy defences at Uthali and Darsana. The position had a series of concrete pillboxes interconnected with elaborate communication trenches. Lt Col Venugopal planned the attack with great professional skill. Showing complete disregard for his personal safety, he led the attack and by his presence inspired his men to achieve the objective. After the capture of these two positions, the battalion relentlessly pursued the withdrawing enemy giving him no rest or time to regroup till Jhenida was captured three days later.”

Lt Col Venugopal utilised the PT-76s too from the 45 Cavalry. One of his rifle companies was assigned to capture the village of Chandpur, east of Darsana. Havildar Bir Bahadur Pun was in the company. It was laid low by heavy and medium machine gun fire from two sides. Before they knew it, some of his men were mowed down. Pun decided it was first important to track the trail of the fire.

Rolling into a nullah, he crawled up to a heavy machine gun nest, a pillbox dug into a mound surrounded by trees with sandbags around. He hurled two grenades into it. The gun silenced, the men took the position and went on to Jhenida. What they thought would be a dash took 48 hours for the brigade to traverse 50 km.

“Havildar Bir Bahadur Pun was in a company of 1 GR, who were given the task of capturing village Chandpur, east of Darsana, on December 4, 1971. The assaulting troops came under heavy enemy artillery and small arms fire resulting in heavy casualties. On seeing a heavy machine gun post of the enemy, which was responsible for causing most of the casualties to his men, he rushed towards it through a nullah, crawled about 100 yards under heavy enemy fire, closed on to the bunker, lobbed two grenades and silenced the post. This act so inspired and motivated his men that the objective was taken within minutes,” reads his citation.