Eliminating hunger in a world of plenty

The National Food Security Act 2013, supported by a strong network of ration shops spread across India, provided much-needed help during the pandemic as the government shifted emphasis to redistribution and welfare schemes and saved many lives from hunger. The country has now moved out of a phase of generalised poverty into what can be called specialised poverty. It’s the poverty and hunger of specific sections that will require targeted efforts. 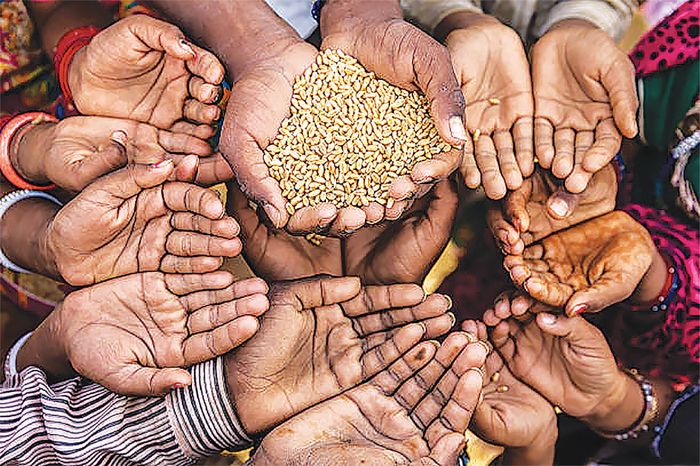 Global hunger is rising despite record production of foodgrains across the world. About 10% of the global population is undernourished, while around 30% did not have access to adequate food in 2020, according to the State of Food Security and Nutrition in the World-2021 report. The pandemic pushed about 11.8 crore additional people into hunger. Covid-induced disruptions in food supply chains, loss of employment and increased food prices put greater strain on the poor. Rising inequalities are adding fuel to the fire.

Similar is the situation in India. In spite of increased production of foodgrains year after year, with all-time record production of 316.06 million tonnes in 2021-22, undernourishment among people has been rising in recent years. Prevalence of undernourishment (proportion of the population whose habitual food consumption is insufficient to provide the dietary energy levels that are required to maintain a normal active and healthy life) increased from 13.8% in 2018 to 15.3% in 2020. Similarly, income inequalities worsened the situation in India.

India has had a food-surplus economy since the past few decades. There are plenty of food stocks and the country has been struggling to export surplus grains year after year. However, excess food availability does not mean that every household is food-secure. People are not able to purchase (access) food due to poverty, low incomes and unemployment in spite of ample food available in markets and warehouses.

Globally, food insecurity increased in recent years due to conflicts among ethnic groups or countries mostly in Africa, climate variability affecting mainly African and Asian countries and low economic growth affecting the same Asian and African nations, besides Caribbean and Latin American countries. While in India, conflicts and climate change are not an immediate threat, food insecurity was mostly due to Covid-induced poverty, low incomes, unemployment and high food inflation. 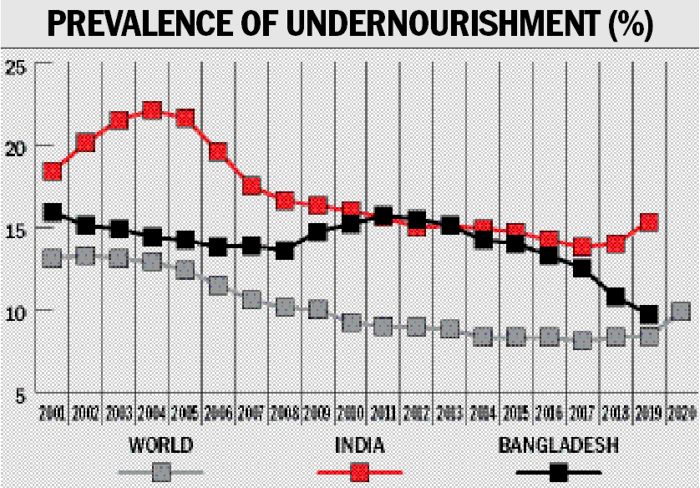 Poverty, deprivation, hunger and social identity go together in rural areas and urban slums. We are seeing the poor and marginalised in our neighbourhood with few assets, a meagre and uncertain income, depending almost entirely on daily-wage earnings for survival. The nationwide lockdown and other restrictions shrunk their earnings from casual labour. The Central Government came up with Pradhan Mantri Garib Kalyan Yojana with a financial package of Rs 1.7 lakh crore to help poor, needy and unorganised sector workers, but it provided only temporary relief.

While the Centre’s big push to infrastructure development, coupled with market forces driving growth in the past 3-4 years, focused on towns and cities, it did not impact marginalised communities and remote rural areas. The infrastructure push is mostly capital-intensive and sometimes labour-displacing; it cannot provide immediate income and employment to the poor living in the vicinity of the sites of these mega projects. The Covid-linked loss of employment, closure of petty businesses and lack of demand for street vendors have been enormous.

Most of the vulnerable people who were left out of the growth story are not able to meet basic needs such as food. The National Food Security Act 2013, supported by a strong network of ration shops spread across India, provided much-needed help. During the pandemic, the government shifted emphasis to redistribution and welfare schemes and saved many lives from hunger. This showed the revitalisation of Indian traditional culture, which considers food as a global public good.

Over the past few years, the Centre has introduced many schemes to take care of basic needs of the poor. Schemes such as Ujjwala (cooking gas), Swachh Bharat (elimination of open defecation through toilet construction), PM Kisan (income support to farmers), Antyodaya (food security), Ayushman Bharat (free access to health insurance), MGNREGA (100 days’ employment guarantee) and old-age pensions are popular, with nearly 100% saturation of eligible households. Providing these things for free or at subsidised rates is equivalent to giving income to households. All these schemes need to be more targeted so that they reach only the needy.

The country has now moved out of a phase of generalised poverty into what can now be called specialised poverty. It is the poverty and hunger of specific sections of society that will not be resolved by generalised development. It will require special targeted efforts.

Even this specific vulnerable population is now receiving enough foodgrains (rice and wheat) under the Right to Food Act. The need of the hour is the introduction of more nutritious, diversified food items such as protein-rich eggs, preparations of pulses and nutri-cereals in the mid-day meal scheme in schools for students and in anganwadis for women and children. The recent initiatives of provision of free lunch and dinner in identified locations of major metropolitan cities such as Amma canteens of Tamil Nadu and the Annapurna Food Scheme of Telangana are direct intervention schemes targeted to address acute food insecurity.

Health, sanitation, housing and food security go hand in hand and contribute to food and nutritional security. Governments needs to work on these issues simultaneously. In the majority of the population, food insecurity has been slowly replaced by malnutrition. Malnutrition refers to deficiencies, excesses or imbalances in a person’s intake of energy and/or nutrients. Unlike food insecurity, prevalence of malnutrition such as Vitamin A deficiency and iron deficiency (prevalence of anaemia) are much higher. As per the recent National Family Health Survey, 56% of women of reproductive age, 59% of pregnant women, and 70% of young children were anaemic. These specific nutrient problems can be solved through biofortified crops produced through genetic engineering. In the long run, Genetically Modified (GM) technologies have the potential to deal with malnutrition.

Overall, the Centre’s measures prevented the food insecurity situation from going from bad to worse during the pandemic among the most vulnerable populations such as migrant workers, street vendors and the poor. It established new food systems to safeguard food security, which need to be institutionalised to tackle future calamities.