Farmers need to be convinced, incentivised

Though technology offered to farmers for crop residue management is disruptive in the sense of being contrary to what they have been practising, the farming community had rapidly adopted the technology offered to them in the late 1960s that helped the nation in increasing grain production during the Green Revolution. Increased and consistent govt support is needed to financially enable farmers to utilise the technology now. 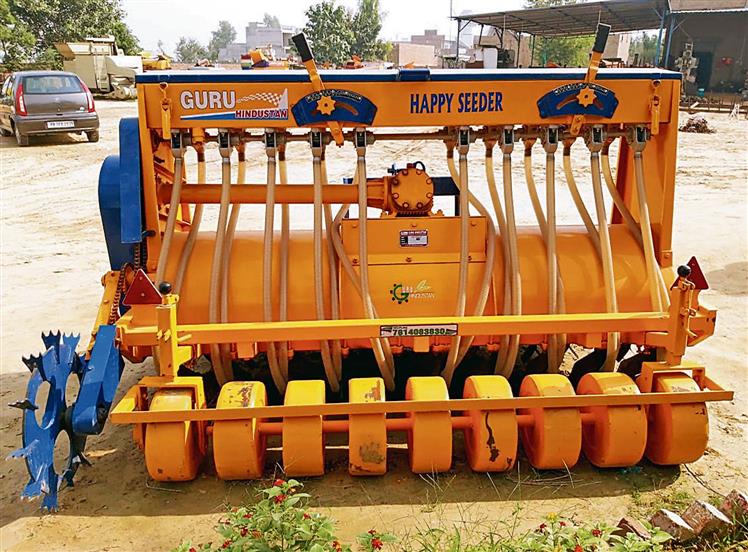 The Happy Seeder not only cuts and lifts paddy straw, but also sows wheat into the soil.

PADDY residue management (PRM) technology is being adopted by farmers at a rate slower than that expected by policy planners. The incidence of farm fires after paddy harvesting in 2019 did not decrease significantly in spite of an appreciable support by the government for popularising farm machinery for the management of paddy residue. These included machines for retention on surface in the field (Happy Seeder and Super SMS-fitted combine), incorporation in the field (chopper, mould board plough and rotavator), and removal from the field (straw baler) of paddy residue. Punjab’s farmers, though known for their keenness to adopt new technologies, neither showed the expected positive response to the advocacy and incentives, nor yielded to other measures adopted by the government.

There is no denying the fact that the alternative technology offered to farmers is disruptive in the sense of being contrary to what they have been practising, but the same farming community had rapidly adopted the technology offered to them in the late 1960s that helped the nation in increasing foodgrain production — the unparalleled feat of the Green Revolution (GR). It would be a learning experience to compare these technologies.

GR: The semi-dwarf varieties of wheat and paddy had a distinct (at least 30%) grain yield advantage over the existing varieties. This made it easier to convince the farmers to adopt these varieties, even though their grain type and appearance were not acceptable.

PRM: Paddy residue management technology has more of ‘ecological’ benefit with no crop productivity/monetary advantage. Rather, it may have a little productivity penalty in some initial years. Farmers are very well aware and do understand the environmental and health consequences of residue burning as well as the long-term benefit of residue retention/incorporation on soil health and productivity. However, their immediate concern is to achieve higher productivity and livelihood.

GR: A farmer could start with a few kilos of seed of the high-yielding variety (HYV); once satisfied, he could scale it up. There were practically no risks once the technology was refined and adapted. The HYVs were able to achieve higher productivity in almost all farmers’ fields due to wider adaptability. Further, the farmer did not have to invest much to shift from one to a better HYV. The higher grain yield potential of GR varieties led to higher productivity and profitability, and tempted the farmers to invest more in farm development and inputs like farm machinery, irrigation facilities, application of fertilisers, etc.

PRM: Over the years, farmers have got used to a convenient method of disposal of paddy residue through burning without any cost. On the other hand, the PRM machines are costly. Further, most of the machines are large and for their operation, high-powered tractors are needed, the purchase of which will render the already available tractors useless. Landholdings of farmers have become smaller over time and they cannot afford costly machines. Though custom-hiring is being promoted, there is no surety of getting enough customers, as it happened during 2019. The purchase of costly machines and the use of high-powered tractors will add to the input costs and lower the profit margins of the farmer. Further, most of the machines do not have universal application. With evolving technology, better machines will become available but it is costly to shift from one machine to the other. Thus, in spite of subsidies, the new technology did not embolden the farmer to make heavy investment.

GR: The adoption of semi-dwarf varieties of wheat and rice was facilitated by the availability of matching crop production technology (e.g. herbicide Machete for weed control in rice) and farm machinery (e.g. drummy threshers for wheat threshing).

PRM: Though several farm machines for residue management are available, the supporting technology to facilitate the operation of these machines (e.g. microbes for rapid biodegradation) is not yet available.

PRM: Subsidy is being provided to purchase machines. But multi-pronged policy support and government interventions are earnestly needed. One should not expect that only the development of machines will solve residue management issues.

GR: The PAU developed and released the first semi-dwarf wheat variety PV 18 in 1966. Farmers were convinced of its yielding ability but being red-grained, they reluctantly adopted it, envisaging problems in the consumption and disposal of produce. The real breakthrough came when PAU released the first amber-grained semi-dwarf wheat variety Kalyan in 1967, later named Kalyansona. This variety was adopted swiftly by farmers due to its amber grain and it continued to rule for the next more than 10 years.

The bottlenecks in the cultivation of these varieties were addressed by the simultaneous refinements in the production technologies. To address poor germination due to shorter coleoptiles, shallower sowing depth was advocated. The dates of sowing and scheduling of the first irrigation (coinciding with the crown root initiation stage) were also modified.

In the case of paddy, after the initial failure of IR 8, farmers were advised to sow the nursery one month earlier, in about mid-May, and a system was developed to provide electricity for early sowing of the nursery since there used to be power shortage at that time. The results were wonderful: early sown crop yielded up to 7-8 tonnes/hectare compared to about 3 tonnes/hectare of the indigenous varieties. Thus began Punjab’s march towards become an important paddy-growing state.

PRM: Refinements are being made in various machines to take care of the limitations and drawbacks noticed in their adoption under different situations. As several stakeholders are involved in this exercise, there has been a multiplicity of machines and terminology (Happy Seeder, Turbo Seeder, Super Seeder, King Seeder, mulcher/chopper/ shredder, etc.). This has added to the confusion and made it difficult for the farmers to decide which machine to buy. Consequently, farmers have adopted a wait-and-watch approach till a refined machine becomes available.

An overview of the trends in the adoption of GR technology gives us a cue that the adoption of residue management technology is likely to pick up with their fine-tuning/refinement but more importantly with increased and consistent government support to financially enable farmers to adopt the technology. Farmers need to be convinced, motivated and incentivised.

Paddy residue management warrants different technologies for different situations, e.g. different machines are needed for baling, mulching etc. The choice of the machine is also influenced by other factors, such as the succeeding crop, soil type (heavy or light), residual soil moisture after paddy harvest, residue load, etc. In contrast, the Green Revolution technology was a sort of one-size-fits-all that was relevant to one and all. It could be adopted irrespective of the farm size, soil type, etc., thereby benefiting all kinds of farmers — small, medium or large.