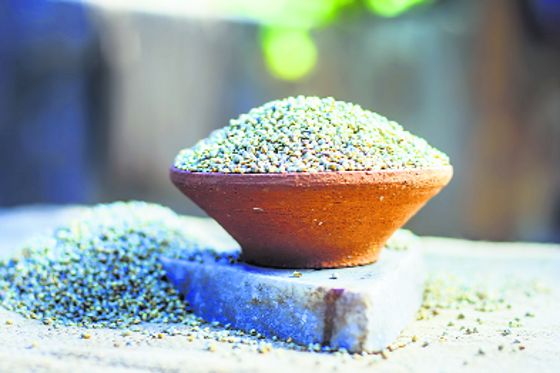 MILLETS, including bajra and jowar, are among the kharif crops grown in dry and semi-dry areas of Mahendragarh, Bhiwani, Gurgaon, Hisar, Rohtak, Jhajjar and Rewari districts of Haryana. According to Agriculture Department figures, Haryana has 483.1 hectares under bajra during 2021-22. Jowar is sown mainly as fodder for cattle.

For farmers, millets are not good enough to sustain a livelihood and thus they have to sow paddy, cotton and other crops, depending upon availability of water. Satya Naryana, a cotton farmer of Bahbalpur village in Hisar, says it does not make sense to sow bajra, which has an input cost of about Rs 15,000-16,000 per acre and then harvest the produce which could fetch a maximum of

Rs 20,000. “I sow bajra for my consumption on a small piece of land. It is not an economically viable crop,” he adds.

A report by Chaudhary Charan Singh Haryana Agricultural University (HAU), Hisar, mentions that the area under bajra has shown a decreasing trend even though its productivity has improved with the adoption of hybrid seeds. Bajra production fluctuates, depending upon the quantum of precipitation as large areas are confined to rainfed conditions. The HAU report states that bajra’s average net returns in Haryana are Rs 1,336 per acre.

The HAU Vice Chancellor, Dr BR Kamboj, says millets are the most resilient and climate-adaptable crops in harsh, hot (up to 50°C) and drought conditions. “In response to the current public health crisis in terms of rising Non-Communicable Diseases and healthcare costs, governments are looking at traditional staple foods for ensuring the daily recommended nutrition,” he says.

Dr Kamboj says millets were traditionally consumed across India, but due to the push given to food security during the Green Revolution in the 1960s, these were rendered ‘orphaned crops’. Before the Green Revolution, millets made up around 40% of all cultivated grains; this share has dropped to around 20% over the years, compromising agricultural, nutritional and environmental concerns. “Its consumption and sowing area have declined, with farmers shifting to commercial crops, oilseeds, pulses and maize. These crops are profitable and their production is supported by several policies through subsidised inputs, incentivised procurement and inclusion in the public distribution system. This has resulted in changes in dietary patterns with preferential consumption towards calorie-rich cereals,” the VC says, adding that due to reduced focus, millets suffered on the R&D front.

Director General, state Agriculture Department, Hardeep Singh says though Haryana has sufficient area under bajra and good productivity, “we need to make people aware of the nutritional richness of millets. Their consumption can be increased by setting up processing units.”