Fast and furious : The Tribune India

World Environment Day is on June 5

Cyclones are getting more powerful and frequent due to global warming. Amphan, for instance, gained much of its destructive strength from high sea surface temperatures. 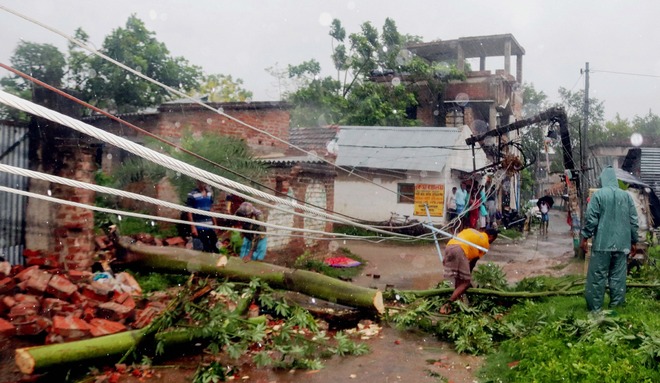 Time to clear the mess: Workers try to restore a power line in Burdwan district of West Bengal after Cyclone Amphan. PTI

On May 21, ‘super cyclone’ Amphan ended its journey as a ‘well marked low pressure area’, just the way it started before its devastating run towards the landmass across the Bay of Bengal. Armed with fury accumulated over the waters, Amphan barrelled along the north Odisha coast before slamming the West Bengal-Bangladesh coast, causing catastrophic losses. Also lost in the widespread destruction was a banyan tree in Howrah botanical garden, which had withstood numerous cyclone seasons in a lifetime spanning more than two centuries.

So what turned Amphan into the first cyclone of 2020, and the first ‘super cyclone’ of the century? What elevated a ‘low pressure area’ into a menacing ‘super cyclone’? ‘Super cyclone’ is the highest category of tropical storms that start as ‘well-marked low pressure area’ and then pass through various stages — depression, cyclone /deep depression, severe cyclone, very severe cyclone, extremely severe cyclone — before turning into a devastating force that Amphan was. A rotating organised system of clouds and thunderstorms, low-level circulations originating over tropical or subtropical waters are called tropical storms/typhoons/hurricanes/tropical depressions, etc.

Many factors contribute to their formation, intensity and route, including greenhouse warming simulations and regional variability. Cyclones in different ocean basins are also affected by natural variations in regional atmospheric patterns. Though global warming is not the only factor at play, stronger cyclones over the years have made accusations of the human fingerprint stronger.

Just like a rocket is powered by hydrogen and oxygen, cyclones are powered by water vapours. Global warming means more water vapours and more fuel for cyclones. Warmer temperatures increase the atmosphere’s ability to hold water vapours and dump it as rain, and warmer SSTs increase the availability of energy to make the cyclones stronger. Global heating has already caused a rise of more than 250 per cent in such storms over the past 40 odd years, Dutta claims.

Simon Wang, Professor of Climate at the Utah State University, says “abnormally warm” SSTs set several new records for cyclones in the Indian Ocean in 2019. “Was this an outlier year or a year that portends things to come? We don’t know yet. But we do know that the Indian Ocean is warming, and we know that warm ocean water is the first, and perhaps the key ingredient for the formation of tropical cyclones. So the system is primed for more storms,” he adds.

Mahesh Palawat of Skymet, a private forecaster, highlights the role SSTs played in the case of Amphan. “SSTs were high and vertical wind shear was low — the two factors, among several others, contributed to Amphan gaining strength as it travelled across the Bay,” said Palawat.

Some researchers have found poleward migration of storm tracks in eastern North Pacific, making conditions “less ideal for typhoons”. However, the general consensus is that tropical storms have become stronger in almost every region of the world, global warming being the major cause. Environmentalists are also linking global warming to the locust storm in India.

Analysing the data gathered from 1979 to 2017, a recent study by the National Oceanic and Atmospheric Administration (NOAA) and the University of Wisconsin-Madison Cooperative Institute for Meteorological Satellite Studies (CIMSS) found that storms have become stronger on global and regional levels, which is consistent with the expectations of how they respond to a warming world. “It’s a good step forward and increases our confidence that global warming has made hurricanes stronger, but our results don’t tell us precisely how much of the trends are caused by human activities and how much may be just natural variability,” researchers were quoted as saying.

Meanwhile, reports also suggest that Siberia is in the throes of a heat wave “that would be considered warm even by the standards of those living outside the Arctic Circle”. Siberian warmth in May is not a one-off event; it has been a consistent feature since the last winter, say experts. Temperature departures from average have been noted across the world, pushing global average surface temperatures to record highs.

And now the dangerous news — even during a low solar activity in the past year, large greenhouse gas (GHG) emissions have caused high global warming. So, what if and when the sun comes back to “average or normal” activity? Snow cover is disappearing, sea ice is melting, fires are raging, SSTs are high... It may just be the beginning, the 25th solar activity might have just started, says Dutta.