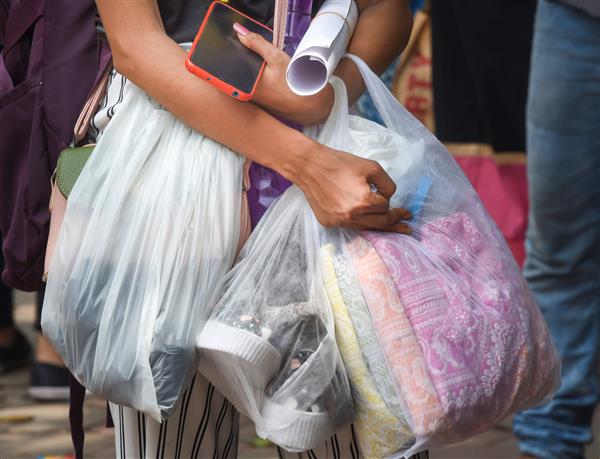 At present, plastic carry bags having thickness less than 75 microns are not allowed. PTI

Nirmal Singh, 45, of Pee Kay Plastics, Chandigarh, which was set up by his father in 1978, is a worried man post the all-India ban on single use plastic (SUP) products, besides another change in the thickness of plastic carry bags. “More than 80 per cent of the inventory in my shop is that of plastic products. We changed the micron thickness of plastic bags to 50, then 75, and now another government notification says that from January 1, 2023, plastic bags less than 120 microns will not be allowed. We are left wondering what to do with the stock lying with us,” he says.

What has been banned

Vijay Goyal, owner of the adjoining provision store, agrees. “I have been in this business for 43 years. From selling plastic use-and-throw cutlery, we moved to the biodegradable one. But this product made from sugarcane waste and corn starch is very expensive. Where a plastic plate costs Rs 3 and Rs 4, a similar biodegradable plate costs between Rs 10 and Rs 12. Most customers are unwilling to pay the price difference. These products don’t have a long shelf life. Also, most articles come to us packed in plastic films with thickness less than 35 microns. Changing the packaging will add to our costs.”

As of now, the alternatives available are very expensive, says Dharmesh Shah, senior adviser to Legal Initiative for Forest and Environment, a Delhi-based environmental law advocacy group. “A single use biodegradable compostable bag made of corn starch that costs Rs 8-Rs 9 tears easily if too much weight is put in it. Large-scale biodegradable plastic production will require a change in our crop pattern. Growing corn, sugarcane and potatoes on a large scale for this will do no good to our environment either,” he adds.

The biodegradable cutlery and bags that are now permitted for use are compostable plastics made from vegetable starch, which doesn’t have polymers. Unlike organic waste such as banana peel or plant waste, biodegradable plastics require an efficient waste and recycling management system to compost, or else these remain in the environment for a long time.

The list of banned items includes plastic products considered low utility and having a high littering potential. Most of these plastic products are too tiny to be collected by safai karamcharis, ragpickers or even machines, and thus end up in drains and nullahs and later flow into rivers and oceans.

Even as companies like Parle Agro, maker of beverage brands such as Frooti and Appy Fizz, and Amul have already sought extension to use plastic straws, options like bamboo, metal, pasta and rice straws, besides the paper ones, are already being explored.

Shah argues, “Why do we even need disposable products when world over people are going back to the kiryana style where you take your own dispensers for refill, something we, in India, had always been doing until this plastic culture was fostered by the market forces?”

“I am happy to carry my own cloth, jute and bamboo bags when I go out for shopping. We all have a responsibility to preserve our environment for the coming generations,” says Gurugram-based Samita Luthra (46), General Manager, BSNL.

Consumers have a huge role to play in this, feels Dr Ravindra Khaiwal, Professor of Environment Health, PGIMER, Chandigarh. “The sale of environment unfriendly goods will stop if there’s no demand. We have been trying to create awareness about the ill-effects of SUP items by organising various workshops. Manufacturers and suppliers have been given enough time to rework their stock since 2018 when the announcement was made,” he says.

But where are the viable alternatives, asks Delhi-based climate and energy expert Soumya Dutta. “Merely directives are not enough,” says Dutta, adding, “There has to be an alternative delivery supply chain, clear incentive policy, material procurement and production before such a ban is enforced. A proper mechanism for verification, monitoring and implementation is required in a country of 1.4 billion.”

“The number and kind of items that have been banned is a very small part of SUP. The FMCG sector has been entirely spared,” he says.

Echoing his words, Satinder Singh, vice-president of the Disposable Kitchenware Manufacturers and Traders Association, Punjab, says, “We understand the importance of saving the environment but the problem is that the raw material needed to produce biodegradable products is not fully available here. But for sugarcane starch, the rest of the material needs to be imported. Also, most of the plastic industry units in the country are in the informal and unorganised sector. Upgrading the microns of plastic bags requires expensive infrastructure changes. Adequate government support should be given to manufacturers for this. After all, employment of lakhs of people is at stake here.”