All it took to turn a village into an ideal one was two young men. Here is mapping the journey of their dream 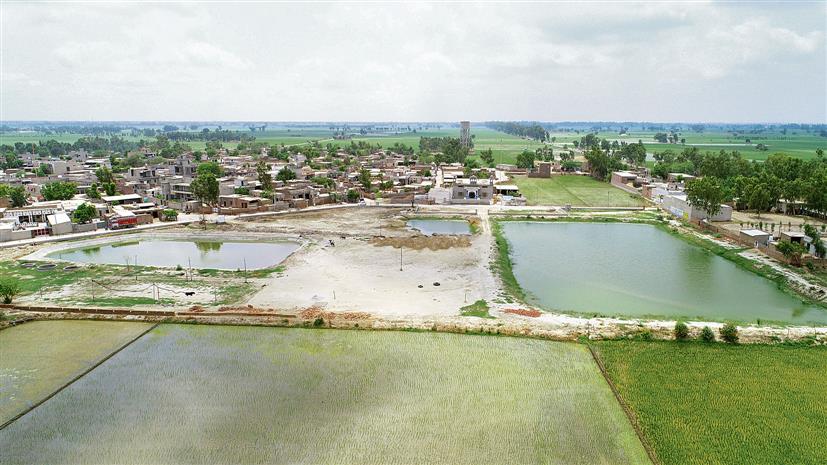 At his village Shreenh Wala Brar, Ferozepur, Gurpreet stood by the filthy banks of the pond and envisaged a small lake with serene waters, lined with trees, recreation and sports area at the far end, and a clean reflection of his village in the water. The sheer expanse of the pond, the garbage mounds along the edge, the amount of sewage drained into the water, and the miasma did not deter his determination to find a way for his dream to come true. He drew a map of the serene pond, and set out to convince and organise his peers, the village elders and the panchayat. The year was 2011.

Passion is contagious. Soon enough, it affected others. Baljinder Brar was one of them. In 2013, the old village library, Guru Nanak Dev Pustak Ghar, was resurrected by them with the help of other reading aficionados from the village. Punjabi writer Ninder Ghugianwi was invited as chief guest; he brought the place under the ambit of Punjabi Sahit Sabha, New Delhi. The books poured in; the youth poured in. They started convening in the library on a weekly basis and brought to life the campaigns to clean the village, clean the crematorium, curb drugs, and ultimately clean the pond.

The beautiful villages in Punjab often have dreamers who live abroad or who are distinguished citizens. The ideas of such individuals are well received by the villagers. Gurpreet and Baljinder were unassuming teenagers when they started out. They built the platform for their recognition purely on their own. They engaged with progressive people near and far; they organised sports events to expand their base in the nearby Guru Harsahai.

Social media played a crucial role in the imaginings of an alternate reality of Gurpreet and Baljinder. They came across young men and women in other villages who were on a similar quest. They took advice from the ones who had accomplished their goals to achieve the look, feel, and workings of an ideal village. Gurpreet created a group called the Ideal Villager, and started a Facebook page to reach out to a bigger number of advisers and audience.

Cleaning the pond was no easy task. It wasn’t until 2017 when the extent of the effort was measured up. Gurpreet initiated and then remained in close contact with Sant Seechewal to treat the pond water. The idea was to fill up two third portions of the pond and keep the rest since the maintenance would be easy. Baljinder collaborated with the local youth to fill up the pond as planned. It took 5,000 trolleys of sand. Yes, that’s right!

The pond was deep. Nobody could have imagined that the filth and slime had such depth, not until they dug up an extended area of good earth. Gurpreet envisioned a large-scale change to how life was lived in the village. Life is dependent on water. Potable water had remained a commodity that was fetched by the villagers from the nearby canal after travelling for a few kilometers. Everyday, day after day. Now that the people became a collective, they found and implemented a solution that catered to everyone. The potable water arrived right inside the village. Similarly, more than four dozen solar lights were installed in the streets.

A great part of the collective responsibility and action is hinged on the fair use of shared resources. Gurpreet, who is greatly inspired by the writings of Shaheed Bhagat Singh and Mahatma Gandhi, aspired to catalyse the ultimate change. By peaceful means. This subsequent step — to free the shared village land called Shamlaat of illegal ownership — was accomplished recently. And accomplished rather peacefully. Such a feat wouldn’t have been possible without Baljinder giving up what hadn’t belonged to him. Additionally, the barren Shamlaat land was reclaimed and made cultivable.

The pond breathes quietly on the outskirts of the village. The serene waters reflect the mounds of soil lined according to the plan. The plan, which is a map of the recreational area around the pond, is printed on a life-size board and fixed near the pond. The things are working smoothly with tractors, trolleys, excavators working in unison. The project is closely monitored by village sarpanch S. Surjit Singh Dhawan.

However, reality is a continuum of a bigger dream. The journey continues for these young men who, after achieving the goal, recognition and power, and having given up the prime of their career-forming youth, have set out to cities to find a job, earn a living. They talk like wise people and sound far ahead of their time. While Baljinder is a fellow at Punjab Youth Leadership Programme 2020-2022, Gurpreet realises that the challenges he accepted and changes he envisioned are just a beginning. His goal is to establish himself as an entrepreneur and create jobs. Nothing is unachievable.