We have huge stocks of wheat and rice — 2-3 times our buffer requirement — whereas the country is still importing pulses and especially oilseeds worth about Rs80,000 crore per annum. Wheat and rice are purchased by the FCI at the MSP without any cap on quantity for the individual farmer, while pulses and oilseeds are procured under the Price Support Scheme with a cap of 25 quintals per farmer and overall procurement limit of 25% for total crop production. 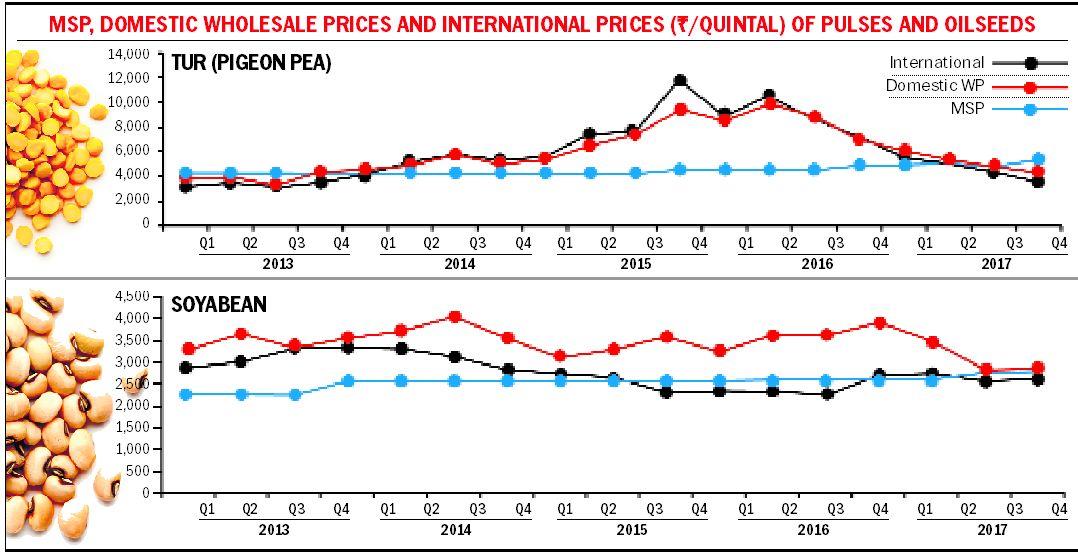 FOR the past nine months, farmers have been protesting at Delhi’s borders, seeking repeal of the three farm laws enacted in 2020. The laws need to be seen in the context of the issues thrown up by the Agricultural Price Policy (APP). The APP is implemented through procurement of wheat and rice at the MSP by the Food Corporation of India (FCI) and pulses & oilseeds by the National Agricultural Cooperative Marketing Federation of India Ltd (NAFED) under the Price Support Scheme (PSS).

At present, we have huge stocks of wheat and rice — about 2-3 times our buffer requirement — whereas the country is still importing pulses and especially oilseeds worth about Rs 80,000 crore per annum. The lopsided production may be largely attributed to biased implementation of APP for wheat and rice compared to pulses and oilseeds. Wheat and rice are purchased by the FCI at the MSP without any cap on quantity for the individual farmer, while pulses and oilseeds are procured under the PSS with a cap of 25 quintals per farmer and overall procurement limit of 25% for total crop production. Further, procurement under the PSS is allowed only if the production in the year is surplus and price is likely to fall below the MSP. There is regional bias too as wheat and rice have 100% procurement in Punjab and Haryana and a few other states joined recently with partial purchases, whereas pulses and oilseeds were purchased in 12 states in 2017-18.

Moreover, states arranging FCI purchases are claiming about 4% of the purchase value as fee and cess and the arhtiyas claim 2.5% as commission and expenses for cleaning etc. The states implementing the PSS have to give an undertaking to forego the market fee, cess, etc. on the quantity to be procured by NAFED. Even the commission agents are not involved and the state has to arrange for procurement at a nominal fee. Owing to more benefits in the states procuring wheat and rice at the MSP, some big farmers and arhtiyas have formed farmers’ unions to bargain for waiving of quality norms and loans from banks, compensation for suicide etc.

Despite the cap on quantity for individual farmers under the PSS, the overall procurement since kharif-2017 is much higher than in previous years. The number of farmers who have benefited from PSS is much more due to the participation of 12 states. The beneficiaries under the PSS are from poor states/regions with less irrigation. A study of the PSS was conducted in 2018-19 by the Union Government for the evaluation of its impact across the country. The study revealed that PSS purchases had created awareness about the MSP among all sample farmers surveyed in eight states. The awareness of MSP was just 5-7% as per NSSO’s 70th Round (2012-13) and the purchases were 2% only; the purchases of pulses and oilseeds had reached 12% of their production in 2017-18. The study further brings out that stocking by NAFED has moderated the price increase and seasonal fluctuations. But procurement under the PSS has failed to increase the market price, which was one of the most important objectives of the scheme. The market prices of most pulses and oilseeds were lower than the MSP during 2016-20. In fact, our MSP of major pulses and oilseeds has even occasionally surpassed the international prices, as per the commodity profiles published by the Directorate of Economics and Statistics.

The most disturbing outcome of procurement at the MSP was the non-participation of traders, stockists and processors in purchases at the time of harvesting. The author verified in 2018 that traders in the APMCs at Junagarh (Gujarat), Gulbarga (Karnataka) and Surajgarh (Rajasthan) were sitting idle during the peak marketing period of groundnut, tur and mustard, respectively. The dal and oil millers reported that they were purchasing from stocks of NAFED at a price below the MSP by Rs 1,000-2,000 per quintal, whereas the farmers were getting only Rs 500-700 more than the market prices. On both counts, the Union Government was incurring liability of about Rs 2,000 per quintal for the loss to NAFED from 2016 to 2019.

One of the questions unanswered so far is about the urgency to bring in marketing reforms through ordinances in June 2020 without wider discussions with the farmers. If we connect the laws with the huge loss due to procurement, especially under the PSS, the government may have been in a hurry to involve the traders and processors in purchases during kharif-2020. The easing of stock limits under the Essential Commodities Act (ECA) for processors and traders may be an incentive to them for procurement. The concept of ‘trade area’ outside APMC without any tax/cess was a direct benefit for processors by saving on arhtiyas’ commission, state tax, transport cost from APMC and loading, unloading charges etc. But, no mention of MSP as the reference price made farmers apprehensive that the Centre may do away with the MSP regime.

After several rounds of talks, the Centre agreed that the states may register the ‘trade areas’ and even levy taxes as per their respective Acts to save the APMCs. The Centre has also clarified that the sale in the trade area will be an additional option for farmers and the existing system to procure in APMCs at the MSP will remain unchanged.

Another apprehension is about the removal of limit under ECA which may result in profiteering by corporates. However, millers of pulses & oilseeds were deriving more benefit than farmers by not stocking in the marketing season. Perhaps the Centre intends to induce such millers to purchases at their sites by saving on fees, commission, transport and other costs at APMCs.

Farming is becoming unviable mainly due to the decreasing size of landholdings and it may require big policy changes like the laws of inheritance and hassle-free lease laws to take out loss-making farmers from agriculture. It may be a win-win situation for farmers and the Centre if the farmers’ unions demand clarification on the type of loans by the lessee and extension in the abeyance period of these Acts to pave the way for ending the agitation.