There is an urgent need for the government to upgrade existing storage facilities and also build new ones. Small-size storage units at the farm level would go a long way in reducing losses. These will also enable the farmers to sell their produce at a time when the prices are remunerative. Over the decades, the government has failed to augment foodgrain storage facilities across the country. In contrast, China converted its entire grain storage into silo storage in 1999; that’s why it is expo 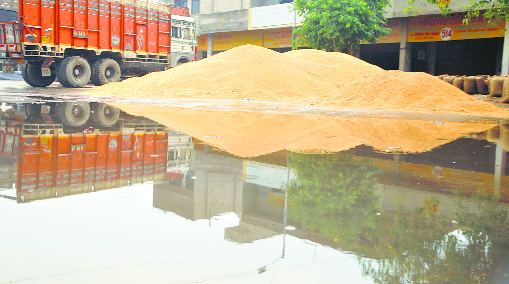 6 per cent loss during grain storage). This speaks volumes about our inability to take care of what our peasantry produces with much effort. This is an avoidable national wastage.

According to one estimate, post-harvest losses in India amount to 12 to 16 million metric tonnes of foodgrains each year —a quantity that the World Bank estimates could feed one-third of India’s poor. The monetary value of these losses amounts to more than Rs 50,000 crore per year. About 75 per cent of the post-harvest losses in wheat and rice occur at the farm level and about 25 per cent at the market level. Of these, nearly 35 per cent losses occur during storage, while harvesting and threshing operations together account for about 17 per cent of the losses in both crops, apart from 20 per cent transit losses at different levels.

Over one million tonnes of foodgrains rotted in FCI (Food Corporation of India) godowns in a decade, which would have been sufficient to feed over 10 million people for a year. Due to insufficiency of covered storage capacity, about 60 per cent is stored under Cover and Plinth (CAP) storage. In Punjab, about 90 per cent of wheat is stored under CAP, which is more prone to damage by moisture, rats, insects etc.

It was in view of this huge and deplorable wastage that in 2010, the Supreme Court had directed the Central Government to ensure free distribution of foodgrains among the poor if we were unable to store the produce safely. Even after over seven decades of Independence, we are unable to provide the required infrastructure at the farm and government levels for safe storage of the produce.

There is an urgent need for the government to upgrade existing storage facilities and build new ones. The expenses for the renovation of existing government-owned warehouses and construction of new ones would largely be met by the saving of foodgrains in a period of two to three years — only if the government has the will to do it.

A high-level committee, constituted in 2014, submitted its report on ‘Reorienting the role and restructuring of Food Corporation of India’. It has made several recommendations, including the one that the FCI should hand over all procurement operations of wheat and rice to states that have sufficient experience and expertise in this regard and have created reasonable infrastructure for procurement. The FCI will accept only the surplus (after deducting the needs of the states under the National Food Security Act) from these state governments (not millers) to be moved to deficient states. The big question, however, remains whether this shifting of responsibility will, in any way, help to save more grains from being damaged.

Obviously, the government has failed to augment foodgrain storage facilities across the country. The three agencies (the department of agriculture and cooperation; consumer affairs, food and public distribution; and the National Cooperative Development Corporation) tasked to add to the overall storage facility have failed to make any significant progress. Though the government had chalked out an ambitious plan to construct silos with a capacity of more than 30 lakh tonnes at various locations in the country, till now only a capacity of about 8 lakh tonnes has been achieved. In contrast, China converted its entire grain storage into silo storage in 1999, which is why it is exporting a lot of grains. We can also save around 10% of the grains and export them.

In India, about 70 per cent of the total foodgrains produced remains in the rural sector with farmers for varying periods. Therefore, educating and training the farmers in post-harvest operations would greatly help in reducing post-harvest losses in foodgrains. The concept of community/cooperative storage would help to check these losses. The Government of India had launched Grameen Bhandaran Yojana)/Rural Godown Scheme in 2001-02. The main objectives of this scheme include the creation of scientific storage capacity with allied facilities in rural areas to meet various requirements of farmers for storing farm produce, processed farm produce, agricultural inputs, etc., and prevention of distress sale by creating the facility of ‘pledge loan’ and marketing credit.

Godowns should be robust in terms of their structure for storage of agricultural produce. Entrepreneurs may have to get a licence under the State Warehousing Act. Godowns which have the capacity to store around 1,000 tonnes must be accredited with the Central Warehousing Corporation. But, only 1,057 godowns under this scheme are reportedly registered with the Warehouse Development Regulatory Authority; eight are from Punjab, even more than 20 years after this scheme was launched. This needs to be looked into and remedial measures taken. Small-size storage units at the farm level would go a long way in reducing storage losses. These will also enable the farmers to sell their produce at a time when the prices are remunerative. In this regard, the ‘zero energy cool chambers technology’ developed by the Indian Council of Agricultural Research needs to be considered. The establishment of the ‘National Grid of Rural Godowns’ as per ecological zones can also be explored.

It won’t be inappropriate to equate the loss of foodgrains with loss of life. The country has tough laws to punish those found guilty of embezzlement of money; considering grain wastage as a criminal act, the laws need to be enacted accordingly. It’s high time the Central and state governments realise the gravity of the problem and try to save every grain the country produces. In the worst case scenario, if the government is unable to provision much-needed infrastructure, the best way out would be to export the grains or to distribute among the poor rather than letting them rot.

The author is former Dean of Postgraduate Studies, PAU, Ludhiana