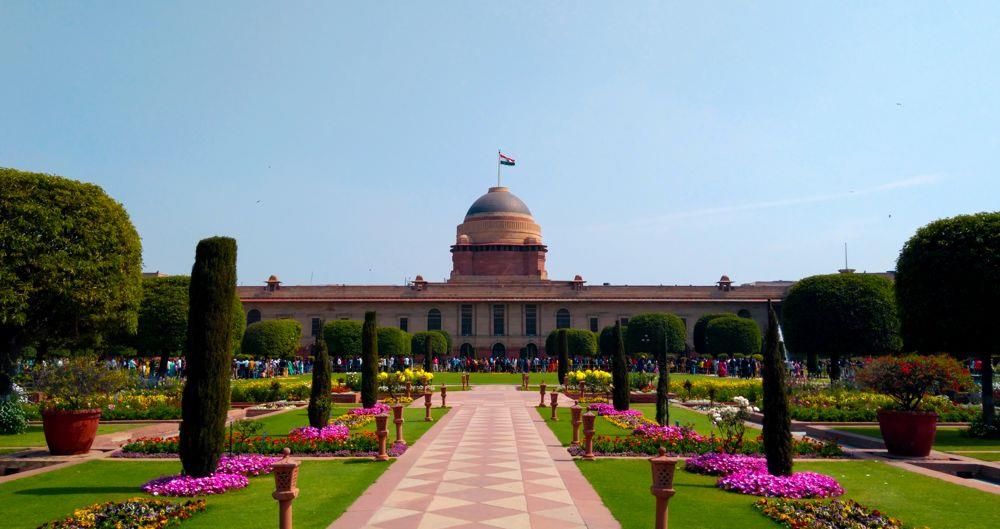 “In thought faith, In word wisdom

In deed courage, In life service

So may India be great.”

Shortly, as the newly elected 15th President of India, Droupadi Murmu, climbs up the 31 majestic steps from the ceremonial red-gravel forecourt of the magnificent Rashtrapati Bhavan, leading to the grand portico with its famous 12 Tuscan columns — the grand vista will reveal many more Indian elements of architecture than those perceived. Mostly seen through the colonial prism of the British Raj as an imperious construct, echoing power and glory through the stones of the empire, much less is known about the vast repertoire of fascinating Indian elements embedded in the architecture, landscape, symbols and details of the edifice.

A new residence for the then British Viceroy was necessitated when during the imperial Delhi Durbar of December 1911, it was decided that the capital of India would be relocated from Calcutta to Delhi.

Famous British architects Edwin Landseer Lutyens and Herbert Baker were commissioned for the Viceroy’s House and the adjoining secretariats. While Lutyens was to design the Viceroy’s House, Baker was to work on the two secretariat buildings. The original plan was to have Viceroy’s House on the top of Raisina Hill and the secretariats at a lower level. However, due to high costs of building on a sloping terrain, it was decided to put both buildings on top of the ridge. That led to the famous professional feud between the two one-time friends, as the steep incline obscured the Viceroy’s House, except for its dome, from the Central Vista.

Lutyens conceptualised an H-shaped building for the Viceroy’s House with a total of 340 rooms, spread over four floors and 190 acres of garden area. It was completed in 1929 and New Delhi, the new colonial capital city, was formally inaugurated on 1931.

Although initially Lutyens favoured the classical Renaissance style of architecture for the Viceroy’s House, later both he and Baker formed a poor opinion of the eclectic Indo-Saracenic (hybrid Mughal-Gothic) edifices built by the British earlier in Calcutta, Bombay and Madras. The question of an appropriate style was hotly debated among British and Indian luminaries, press and intellectuals. Notably, eminent art historian EB Havell strongly favoured respecting the great Indian traditions of art and architecture. The architects were under pressure from the Viceroy, Lord Hardinge, to take “whispers from the East” — and adopt the best of both Indian and Western styles, to send out a ‘bridge-making’ message to the vast Indian subjects.

Edwin Lutyens travelled to Sanchi to see the Buddhist stupa, to Sarnath near Benares, and to Mandu and Agra for study of Islamic architecture and charbagh gardens. The first Indian element was the choice of the building materials like the Agra and Dholpur sandstones used in the Mughal and Rajput buildings. Numerous other elements like domes, chattris, cupolas, chajjahs, jaalis, etc, were adopted from the Rajput, Mughal and Buddhist architectures. Also, Indian symbols like the elephant, lions, snakes, fountains, commemorative pillars (Jaipur Column) were woven into the facades and details. The Rashtrapati Bhavan’s interiors too are replete with Indian art, symbols and frescoes taken from the Indian traditions.

The first glimpse of the scale and majesty of Rashtrapati Bhavan is viewed through its formidable forecourt. The 640-foot-wide horizontal spread gives it a more majestic feel than its height. From this vast plaza, one can see 12 Tuscan pillars resting above the 31 stately stairs.

The form of the dome above the roof is more a derivative of the stupa than the western style. It rests on a high drum patterned like high stone railings around Buddhist stupas. The other Indian elements on the roofline are the Rajasthani and Mughal chattris with motifs of elephants and bells on supporting ornate stone pillars. Giant fountains shaped like cascading petals punctuate the flat skyline.

The facade included the traditional Indian chajja that shielded the interiors from the harsh summer sunlight and heavy rain during monsoons. Lutyens’ choice of red and beige sandstones that were used by the Mughals and Rajputs are beautifully in sync with Delhi’s climate. “Climate is the architect’s colour,” he had said.

The 20 classical pillars of sandstone on the front verandah of Rashtrapati Bhavan showcase Lutyens’ Indo-classical fusion architecture as they rise up to temple bells that have been carved on the top four corners of each pillar. Lutyens took great pride in creating this amalgam of Greek and Indian styles and referred to them as the “Delhi Order”.

There were also statues of elephants and fountain sculptures of cobras, as well as the bas-reliefs. Lutyens established ateliers in Delhi and Lahore to employ local craftsmen and sought services of the principal of the Lahore School of Art in crafting these motifs.

In the midst of the forecourt is the lofty Jaipur Column, standing at a height of 145 feet. It is inspired by the traditions of Mauryan art of establishing commemorative pillars, with one standing in Delhi’s historic Qutab Minar precincts. Sponsored by Maharaja Madho Singh of Jaipur, it was built to celebrate the transfer of the capital and as a token of allegiance of the princely state to the Crown. It is made of sandstone and atop is a 5-tonne bronze lotus, from which emerges a six-pointed Star of India made of glass.

Some prominent Indian elements and art objects have been added to Rashtrapati Bhavan after Independence also. There is the magnificent Rampurva Bull, a third-century BC sandstone capital (element at the top) of the Ashokan Pillar. At present, it is mounted on a pedestal between the central pillars at the forecourt entrance. The bull is known for its delicately sculpted form and aesthetic features. This invaluable artefact became a part of Rashtrapati Bhavan in 1948 after it came back from London, where it had been taken as part of a grand exhibition of Indian art.

As one enters the interiors, classic Indian art pieces adorn various vantage points. Lord Buddha’s statue, known as Sahastrabahu avlokiteshvara, is placed at a landing of the south ash-grey marble staircase. The 1,000 arms’ statue of Lord Buddha is a gift from the Government of Vietnam. Sahastrabahu in Sanskrit means ‘one with 1,000 arms’ and avlokiteshvara means ‘the lord who looks upon the world in compassion’.

On the western side of the magnificent Durbar Hall of Rashtrapati Bhavan is placed the fifth-century AD statue of Lord Buddha against a crimson velvet background, that HY Sharada Prasad described thus: “this figure proclaims the supremacy of peace and self-conquest.”

Ashoka Hall is another fascinating and ornately decorated room of Rashtrapati Bhavan. Its ceiling shows an equestrian portrait of Fath Ali Shah, the second of seven Qajar rulers of Persia, hunting a tiger. This leather painting, 5.2 metres in length and 3.56 metres in breadth, was gifted to George IV of England and brought from London. The excellence of the painter creates an optical illusion that when one sees the eyes of Fath Ali Shah in the painting from any corner of the room, he appears to be focusing on the viewer.

As one finishes the guided tour of the interiors and emerges out on the western side, the huge expanse of 15 acres, the Mughal Gardens, is the perfect setting for the impressive structure’s huge architectural thrust. Lutyens’ horticultural expert William Robert Mustoe drew inspiration from the Mughal Gardens of Jammu and Kashmir, the gardens around the Taj Mahal and even miniature paintings of India and Persia.

The timeless splendour of Rashtrapati Bhavan that lingers on through the haze of hot summers and the mists of cold winters is best described in former President R Venkataraman’s words, “Nature and man, rock and architecture have rarely collaborated to so fine a purpose as in the fashioning of the magnificent Rashtrapati Bhavan.”