Happy Bird Day: Chandigarh Bird Park is one of its kind : The Tribune India

Happy Bird Day: Chandigarh Bird Park is one of its kind 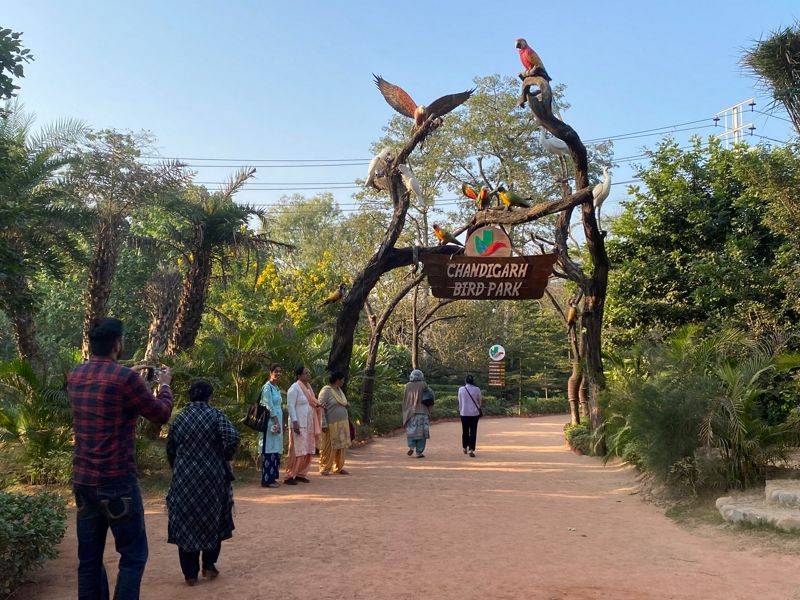 Photo by the writer

Chandigarh, with its many gardens and a vast green cover, remains a huge attraction for numerous migratory birds from as far as Central Asia. It also has several species of resident garden birds and is a paradise for bird watchers — both experts and beginners as well as curious nature lovers. With the highest tree canopy cover in the country featuring a large variety of flora, the planned city is a living example of outstanding biodiversity among urban habitats in the country. 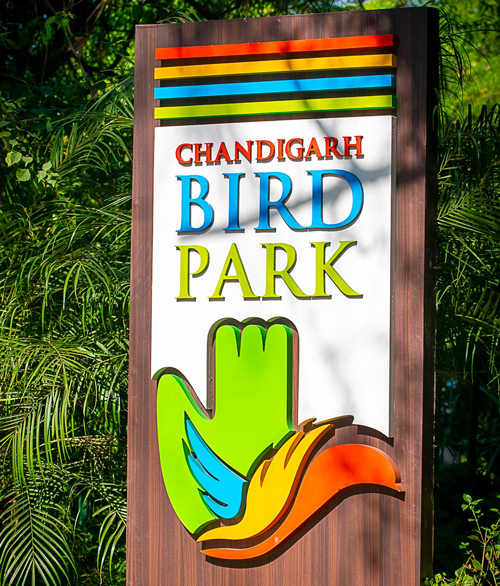 Keeping in with the vision of Le Corbusier, the UT Administration inaugurated the Chandigarh Bird Park on November 16, 2021. India’s first exclusive bird park dedicated to the avi-fauna, it is located at Nagar Van adjacent to Sukhna Lake on the north-east edge of ‘Capitol Parc’ stretching from the lake to the Capitol Complex — an area reserved for naturalistic features. It includes the lake, forests, nature trails and theme gardens.

India has nearly 200 zoos and a small number of bird species, both Indian as well as exotic, are usually housed in one section. This is the first time a whole park has been devoted to birds. Countries like Singapore and Australia notably have been pioneers in this endeavour. In fact, the Chandigarh Bird Park has been conceptualised and developed in line with the world famous Jurong Bird Park in Singapore. It proved to be an inspiration for Debendra Dalai, UT’s Chief Conservator of Forests-cum-Chief Wildlife Warden, when he visited it in 2019.

For a small UT spread over 114 sq km, the city already has two sanctuaries — the Sukhna Wildlife Sanctuary and the Chandigarh City Bird Sanctuary for parakeets in Sector 21. A bird park, hence, was an obvious option. It would require a limited area and serve well as an educational and nature awareness centre. A dedicated team of the Department of Forests and Wildlife, UT, conceptualised and developed the Bird Park adjacent to the lake.

The Chandigarh Bird Park is spread over 6.5 acres, and its main components are two huge aviaries for terrestrial and aquatic birds with a 58-foot flying height and a total ground area of approximately 200×150 feet each. The facility has two small and two walk-through aviaries. The enclosures inside the park have been designed in such a way that the birds, apart from taking flight and nesting in the natural habitat, can stay at the aviary while visitors can walk past them. The structures enclose thousands of plants of varying canopies, which provide an ideal habitat, food and shelter for the birds that can fly freely and breed. The park currently has nearly 550 exotic birds of 48 species.

Would the birds kept in captivity not be restricted in their freedom? “The term ‘captivity’ has undergone a sea change in recent times and the animals/birds are offered near natural habitats. A similar concept has been adopted for the Chandigarh Bird Park, where the flying height of the enclosures is the highest in the country so far,” says Dalai.

No bird in the park has been imported. They are all born and bred in India.

The most popular section, though, is the ‘tamed bird section’. These birds provide the most picturesque opportunity to visitors to have a close interaction with the feathered friends. Huge colourful macaws come and perch themselves on your arm, creating the perfect moment for selfies for social media.

The park has been established with the internal expertise available with the Department of Forests and Wildlife. Its maintenance, including cleanliness of the surroundings, has been noteworthy. As a result, more than five lakh visitors have visited the park in just over a year of its inauguration.

Ongoing plans for future development include bringing ostriches found in Africa and emu, the largest bird of Australia, to the park. A special enclosure for six birds each of the two species has been prepared. Besides, American ducks will also be kept.

Recently, the department carried out successful breeding at the park of an exotic pair of black swans, natives of Australia. So far, 42 chicks of different species, including three of black swan, have taken birth here. The black swan is an expensive and rare bird and it was one of the most successful breedings carried out at the park. Eleven newly-born budgerigars were also recently released in the main enclosure along with four new-born wood ducks in the aquatic aviary of the park.

All this has been made possible due to the meticulous care taken by the staff. The environment is controlled and adequate arrangements have been made to protect the birds against extreme weather conditions. Electric heaters have been provided under the bridges so that during extreme winters, the birds can take shelter near them. During the summers, coolers and fans have been provided at different places inside the aviary. Different shelters made up of thatched roofs have also been provided at various places to provide refuge during extreme summer as well as rainy season.

On the first day of 2023, the bird park witnessed the highest-ever footfall of 6,247 on a single day, a testament to its value to the city and urban habitats and attraction among people.

A close interaction with birds in their natural habitat is a unique experience for the visitors. Many of them go back baptised into bird watching or develop a love for birds, providing grains and water in their backyard for them.

As a lasting testament to his vision, Le Corbusier painted a door to the Assembly building with enigmatic symbols of nature and living beings. The message that man doesn’t exist alone but is simply a co-inhabitant comes out tellingly.

The Chandigarh Bird Park is more than a journey to exotic birds — it’s a flight of fancy to nature’s wonderland.

A large parrot with long tail feathers and mainly blue and yellow in colour. The forehead is green; the upper part of the body a brilliant blue; the sides of the neck and body are golden yellow. 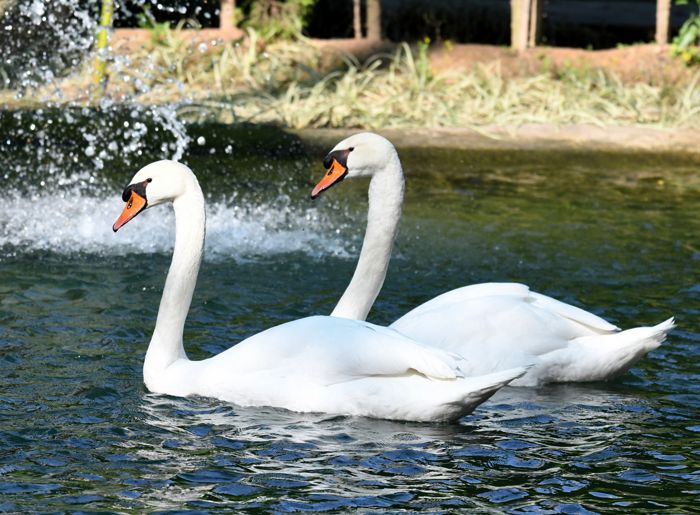 The black swan has dark body plumage with white feather tips on its wings. The bill is bright orange-red with a white band near the tip and the eyes are bright red.

This large, all-white swan is recognised by an orange bill, which is black at the base. Another distinctive characteristic is a curved S-shaped neck, with the bill pointed downward while the bird is swimming. 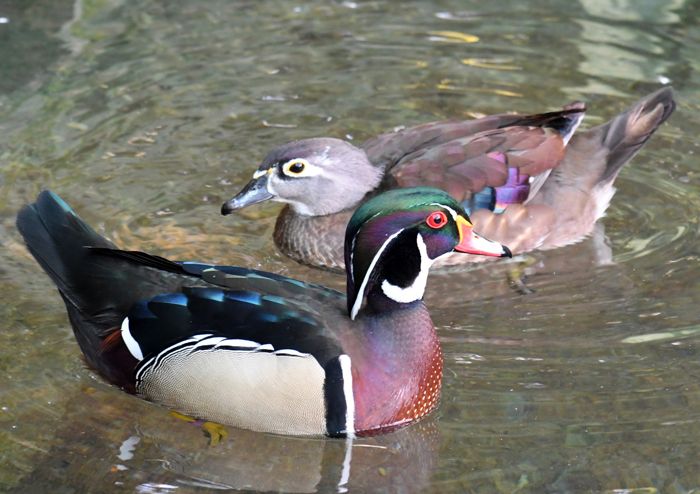 The wood duck is one of the most colourful of all waterfowl. Males have ornate colours on every feather; females lack the bright patterns of male but have unique crested head shape and delicate white teardrop around the eye.

Tara Gandhi, a student of the legendary ornithologist Salim Ali and an acclaimed biodiversity conservationist, sounds a note of caution. Bird parks with captive exotic species, she says, are more or less like mini-zoos mostly for a pleasant outing or entertainment. The general visitors usually just want to see the colourful and interesting creatures, but may not understand much about them or birds in general. Since the birds are all exotic and not indigenous and are kept in captivity, the park does not enhance urban biodiversity or ecology.

“However, if there are good displays and guides, a well-run bird park can serve to educate about birds from other countries and encourage interest. Bird sanctuaries have much more environmental value since they are a refuge for local birds and also provide a habitat for migrant species. The value of a sanctuary is greater since it is a natural ecosystem that supports other fauna and indigenous plants and provides ecological benefits to the city. The aviaries in bird parks should be spacious and, as far as possible, mimic the natural environment of the birds — as, for example, at the famous Jersey Zoo and Durrell Wildlife Park, founded by naturalist Gerald Durrell in the island of Jersey in the English Channel in 1959. It completely prevents visitors from petting or touching the birds. Very importantly, visitors should be advised not to buy exotic birds to keep as pets. They should be informed that trade in these birds has stringent legal protocols to comply with.”