Harpreet Kaur and her 31 rings, an Afghan Sikh refugee’s tale

After her husband was killed in a blast in Jalalabad in 2018, the Afghan Sikh family moved to Delhi, but it has been an unending struggle. ‘We came for a better life, now we wonder whether Afghanistan was better,’ says the 40-year-old 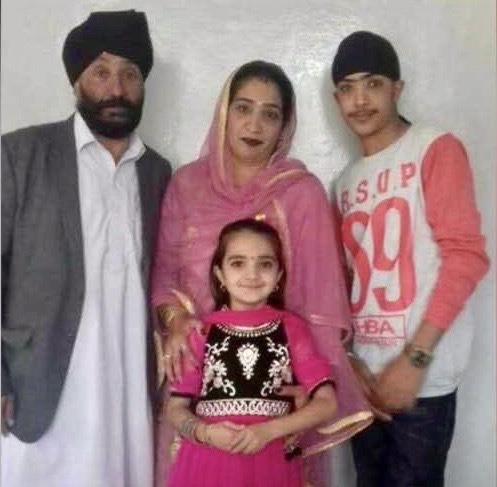 Harpreet Kaur with her family in happier days.

HARPREET Kaur was a young girl in Delhi when she married her love and moved to Kabul. “At first, I couldn’t understand where I had come. I used to cry in my room,” she recalls. Slowly, the community’s irresistible warmth touched her. “Phir mera bahut dil lag gaya and I didn’t want to leave.” Her parents had left Afghanistan for Delhi after Baisakhi in 1947. She grew up as a daughter of refugees in Delhi but little did she know she was going to become one herself, when she had to move back from Kabul after her husband’s death in a blast in Afghanistan. Harpreet Kaur is one of the rare Delhi transplants into Kabul, who eventually returned to Delhi, now a city of strangers for her.

Harpreet has two children, both born in Afghanistan. Her husband, Rawail Singh, was a community leader and trader. “He taught me to read and write. I am literate because of him,” she says. “Every day we made lunch at home, and went out for dinner,” she recalls. Her kids went to good schools and speak fluent Punjabi. She remembers the little things he did. “Every evening their father would come home from work and teach them Punjabi,” she says. “Every year on our anniversary and my birthday, he gifted me a ring,” Harpreet remembers, “I had 31 rings in all. I felt like a queen.”

When a six-year-old Muslim girl landed at her doorstep, Harpreet took her in. She became her third child, and grew up with her own children. “Whenever my kids got a dress made, she would get one too”. To Harpreet, it didn’t matter what faith she belonged to.

Never in their wildest dreams had the family imagined that their life would change forever. In 2018, her husband received an invitation to join a caravan of Sikh leaders of Afghanistan to meet the President, Ashraf Ghani, in Jalalabad. “I had a feeling that something bad was about to happen,” Harpreet says. But her husband didn’t think twice, “Mein seva karan ja rehan, meinu kuch nahin hunda,” he said, and left. That was the last time Harpreet saw her husband. In a country where explosions and bombings are so frequent, life is uncertain. When Rawail Singh, along with 12 other Sikh leaders, went to meet President Ghani, their van was asked to wait at the gate of the President’s complex. Before they knew it, a suicide bomber appeared and the leaders were no more. Ghani was unharmed. He continued with his meetings.

The tragic incident changed the lives of the families related to these 17 leaders. Harpreet’s life was thrust into turmoil. Living in areas of conflict does not make the pain of loss any less. Trauma translates into a blur sometimes, and before she knew it, Harpreet had landed in Delhi. “Afghanistan wasn’t safe,” she says. She left her house in care of the Muslim girl she had raised, now 20 years of age. She left Afghanistan six months after the blast, and took next to nothing with her. But despite having arrived in Delhi more than two years back, Harpreet still considers Afghanistan her home.

Harpreet now lives in the Tilak Vihar neighbourhood of Delhi, along with many other Afghan Sikh refugee families. The community continues to struggle. While stories of Partition are romanticised from afar, there is nothing beautiful about this modern-day Sikh refugee crisis. As they all wait to emigrate, the question remains — how are they doing in Delhi?

When the pandemic struck

Things took a turn for the worse for the community when Covid-19 struck. “My son assisted at a local shop for a meagre pay but during the lockdown, the shops were closed. One day I found him crying like the way he did when his dad died,” says Harpreet. When she asked him the reason, he said, “I want to go back to Afghanistan. I cannot find work; I can’t sit here and be useless all day. If we’re going to die, we’re going to die, why not just go back home?”

Harpreet had taken on seamstress tasks but low demand caused that to shut down too. “We live in a rented house. There are bills to pay: electricity, water and phone,” says a teary-eyed Harpreet. She says, no organisation was providing any support, and even if there was any such support available, she doesn’t know how to go about seeking it. “No one asks about us. It’s as if we don’t matter,” she adds, “no one cares to know how we put food on the table — saada koi puchan wala nahin hai”. She goes on, “We moved to Delhi for a better life, but sometimes I wonder if Afghanistan was better.”

Similar has been the fate of most Afghan refugee families. Losses trickled down to lay-offs and many members of the community went without even the paltry assured income. “The situation in Afghanistan has continued to worsen. Thinking of going back means accepting death. Yet, this thought continues to cross our minds — not just because it is home, but because of what Delhi has given us,” says Harpreet.

Earlier this year, 25 Sikhs were killed when a militant attacked a gurdwara in Kabul in the midst of an ardas. Efforts have been on to bring back remaining members of the Afghan Sikh community to Delhi for reasons of safety. But is that enough, asks another Afghan Sikh refugee Giani Gurnaam Singh, who has moved from Jalalabad to Delhi. According to him, evacuating Afghan Sikhs has a laudable effort but more needs to be done.

"We must not assume that landing in Delhi is the solution - it is only a new beginning", he says. International efforts to resettle the community appear limited to newly arrived refugees.They must be provided long-term foreign resettlement and short-term empowerment efforts. All the individuals interviewed for the Afghan Sikh Voices project view Delhi as only a temporary relocation, as they hope to leave for the West soon.

Harpreet’s story is a testament that time is not always healing, and humanity is not always forgiving. It has been two years since Harpreet came here but her situation continues to worsen. Now, as a 40-year-old, with two teenage children, she has no NGO assistance to register with the UNHCR or resettle in a different country. Foreign philanthropy provided short-term resettlement assistance to other families.

Harpreet’s three-year visa will expire next year and she has no clue as to what comes next. Nothing makes sense to her. When asked how she pays the bills, she says, “I sold the 31 rings my husband gave me.”