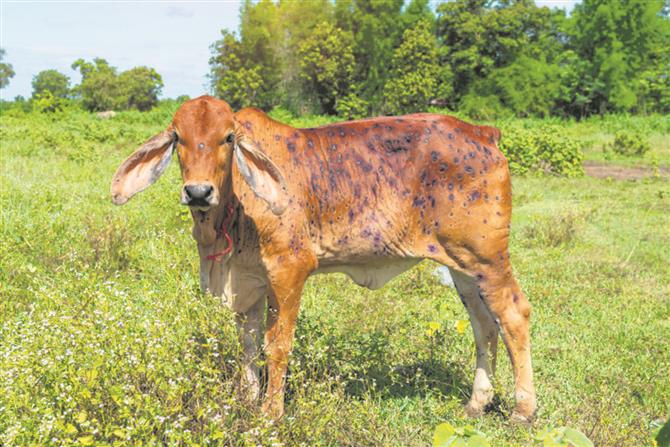 As farmers of neighbouring Punjab confront the havoc created by lumpy skin disease (LSD), the Haryana government has been quick in responding to the challenge. 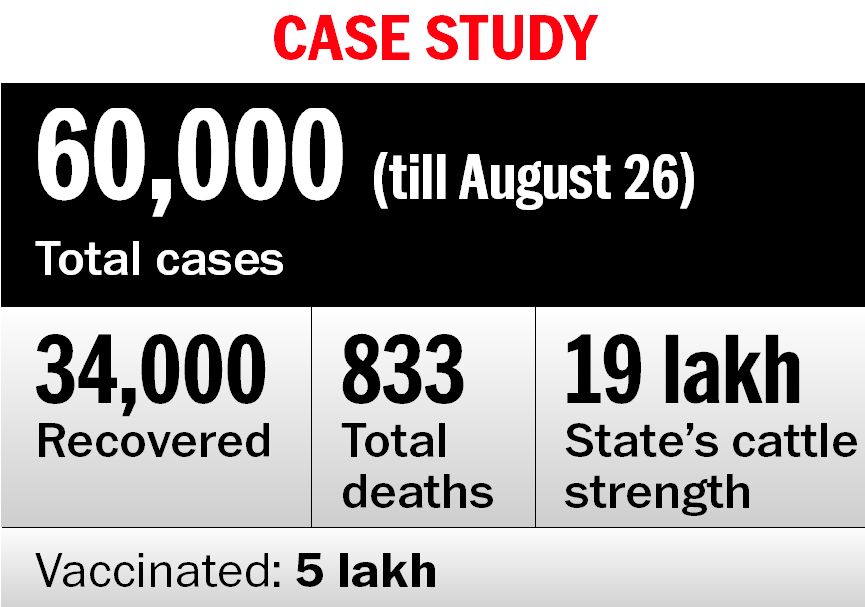 Data from the Animal Husbandry Department says around 60,000 animals, including 100 buffaloes, have been infected with LSD, of which more than half (34,000) have recovered. The total number of fatalities is over 830 after the first case was reported in Yamunanagar in the last week of July.

Yamunanagar, Sirsa, Fatehabad, Ambala, Karnal, Kurukshetra, Kaithal and Panchkula are affected the most by the disease in the state, while districts in the National Capital Region are less affected. Dairy farmers’ earnings have come down, but the input cost has increased manifold. “My six animals are affected with the disease, which has reduced the milk production. I also have to spend money on medicine and treatment,” says Anil Kumar, a farmer of Karnal district.

In animals infected by LSD, the yield and quality of milk are also affected depending upon the severity of the disease.

Mahabir, a farmer from Kirmich in Kurukshetra district, has urged the government to announce some relief for the affected farmers as the cost of maintaining and treating animals is quite high. There has been no response by the state authorities as yet.

Experts say LSD is not zoonotic, so humans cannot get affected by the disease. Transmission of disease between animals and humans is not possible and consumption of milk after boiling is safe.

After LSD spread to several districts, Haryana Chief Minister Manohar Lal Khattar directed the officials in mid-August to procure vaccines and inoculate all cattle. Officials say around five lakh cattle have already been vaccinated out of a total of 19 lakh in the state, despite a shortage of veterinary staff in the field.

Haryana has also ramped up its testing facilities and recently started an RT PCR facility for preliminary screening at Lala Lajpat Rai University of Veterinary and Animal Sciences, Hisar.

The recovery rate of cattle has been good. Most infected animals recover in 10 days and the mortality rate is less than 1 per cent. The rate of recovery is quite high in comparison to its spread.

Dr Tarsem Rana, a veterinary surgeon, says innate immunity of animals is playing a vital role in their protection. Animals with better immunity are less affected or are recovering faster with mild symptoms as compared to animals with impaired immunity. Dr Rana, however, cautions farmers against rushing to get the infected animals vaccinated, as it is a live vaccine and can only be administered to healthy animals.