Moong procurement cannot be treated as an extension of paddy and wheat procurement by the state government. For expanding area under moong and other pulses on a sustainable basis, two key constraints — marketing risk and production risk — should be mitigated. Prices in Punjab’s mandis remain low despite a shortage of pulses in the country. It will be prudent to issue a notification in Feb 2023, mapping the moong area to 5-7 mandis or procurement centres before sowing begins. 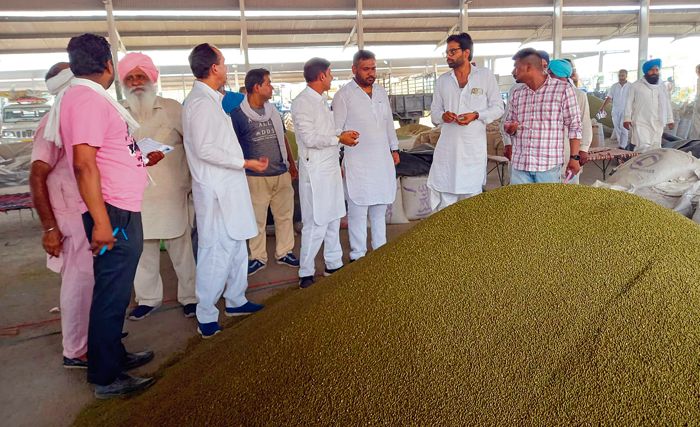 Farmers of Punjab need to be compensated for selling moong below the MSP. Tribune photo

THE Punjab Government started procuring summer moong (green gram) at the minimum support price (MSP) of Rs 7,275 per quintal last month. The procurement will continue till July 31, even as there are reports that many farmers have been selling their crop below the MSP. For achieving economies of scale, the policy instruments and procurement modalities should be carefully crafted to mitigate constraints on moong production and marketing. The approach should be guided by a critical appraisal of various options as the fiscally constrained state government has limited elbow room on the expenditure front.

As per Department of Agriculture estimates, summer moong was planted on about 40,000 hectares (ha) in 2022. The expected production is 40,000 metric tonnes (MT). About 25 per cent will be used for domestic consumption or sold within villages. The marketable surplus should be around 30,000 MT.

For expanding area under moong and other pulses on a sustainable basis, two key constraints — marketing risk and production risk — should be mitigated.

Below-MSP harvest-time price was the main deterrent to moong cultivation. Of the total area, 73 per cent is in Bathinda, Mansa, Moga, Muktsar and Ludhiana districts. The remaining area, thinly spread over several districts, will witness procurement hassles. Some of the notified cooperative societies will receive small quantity, resulting in high transaction costs.

Due to low production and fragmentation of marketing, prices in Punjab’s mandis remain low despite a shortage of pulses in the country. It will be prudent to issue a notification in February 2023, mapping the moong area to 5-7 mandis/procurement centres before sowing. South-western districts of Punjab are suitable for the production of oilseeds (mustard) and pulses (moong and gram). Over the next 5-10 years, the goal should be to develop one large pulse and oilseed market in Bathinda or Mansa on the pattern of Hapur Mandi in UP. UP produces zaid (summer) urd (black gram, mash) and its price invariably remains above the MSP at Hapur Mandi as it attracts many traders.

To reduce the fiscal burden of the expansion of moong area, the MSP intervention should be supplemented with the rollout of negotiable warehouse receipts (NWRs) and a deficiency price payment system (DPPS), strengthening of marketing intelligence, and development of farmer producer organisations (FPOs). These mechanisms should be simultaneously developed over the next 2-3 years.

By using an NWR, instead of harvest-time distress sale, the farmer can obtain a bank loan to meet his immediate needs by hypothecating his moong for which a warehouse registered with the Warehousing Development and Regulatory Authority (WDRA) has issued an electronic (e)-NWR. He can sell during the off-season when the price is higher.

Punjab has only five accredited warehouses with a storage capacity of 4.4 lakh MT. These are used by traders and importers, and not by farmers. Farmers in agriculturally diversified states like MP, Rajasthan and Maharashtra can access a large number of accredited warehouses. The Punjab State Warehousing Corporation should get its warehouses near the mandis identified for moong procurement accredited by the WDRA. Operationalisation of NWRs in Maharashtra enhanced price realisation by 8-20 per cent.

Implementation of DPPS, whereby the government pays the difference between MSP and the actual price received by the farmer, is another option. For preventing exploitation of DPPS by the traders, alternatives like e-NWRs should be operationalised simultaneously. The requirement of farad as documentary evidence safeguards against exploitation of DPPS. The state government should be the procurer in the last resort as it is not an efficient pulse trader.

Another mechanism is strengthening of the nascent Agriculture Marketing Innovation, Research, and Intelligence Centre of Punjab Agricultural University, for guiding farmers about crop diversification options. This centre can issue advisories about the expected price bands if the total area under moong does not exceed a threshold so that the farmers can make an informed choice before sowing time. It will also generate data for improving efficiency and reducing pain points in the long, twisted value chains of Punjab’s agricultural commodities, including moong.

Yet another mechanism is the development of FPOs and linking them with bulk buyers and other organised retail. Punjab has few fully functional FPOs, unlike hundreds of such farmer collectives in other states. Vibrant FPOs have empowered farmers to lower production costs, improve product quality, and earn greater share of consumer spending by directly accessing input and output markets. The nodal agency, Punjab Agricultural Management and Extension Training Institute, Ludhiana, should be strengthened to mentor FPOs. Like cooperative societies, the GoI’s Price Support Scheme allows FPOs to act as procurement agencies.

Land preparation: Give 2-3 ploughings followed by planking to crush the clods and eradicate the weeds. Moong can also be sown without any preparatory tillage with zero till drill.

Time of sowing: Sowing (rabi) should be done from March 20 to April 10.