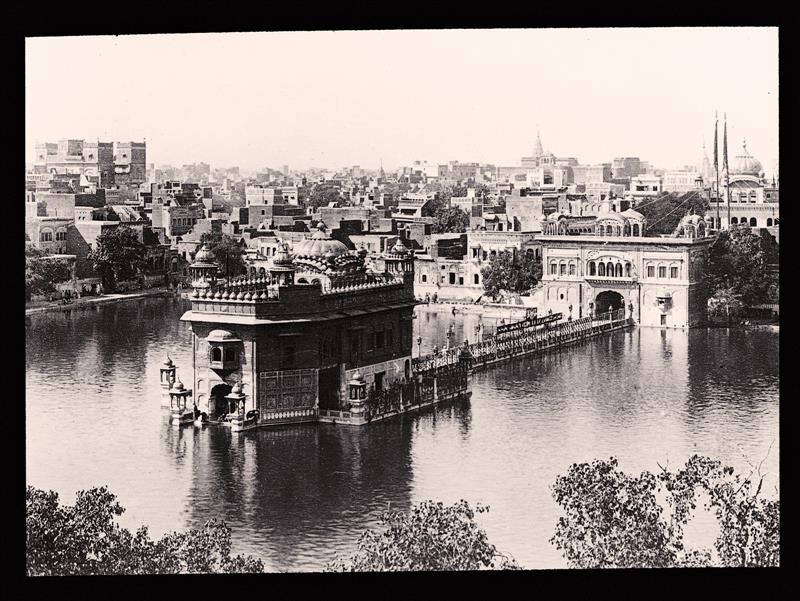 Bungas along the parikarma in this 19th–century photograph by Fred Bremne; also seen are the Darshani Deori and Akal Takht. Photo courtesy: Toor Collection

The accidental unearthing of a basement of Burj Giania (Tower of Scholars) on the periphery of the Harmandir Sahib complex in the course of the ongoing construction activity has once again brought to the forefront the intrinsic link between tangible and intangible heritage of the Sikh community. The excavated basement is that of a building typology known as a bunga (fortified dwelling place) — immortalised in the daily Sikh prayer (Jhande Bunge Jugo Jug Atal). These buildings have collective memories of the Sikh sacred space embedded in them and are rare to find. Giani Gian Singh listed 69 bungas which existed around Harmandir Sahib till the early 20th century, of which only Bunga Ramgarhia and Bunga Sher Singh survive.

Bungas came into existence in the late 18th century to serve the secular needs of the community at sacred sites. More precisely, these can be described as the secular satellites of Sikh sacred space. They were established in all major Sikh pilgrim towns like Amritsar, Tarn Taran, Baba Bakala, Khadur Sahib, Talwandi Sabo, Nanded and others. The ownership was personal or community-based. They were centres of learning, places for religious and socio-political discourse, and also provided residential accommodation for pilgrims. While the sacred shrine sat embedded seamlessly within the fabric of the city, the outer edge of the parikarma of the amrit sarovar was defined by the bungas, which formed the innermost line of defence around the shrine.

In Amritsar, the first bunga was built in the mid-18th century after the rise of the Sikh misls. The rebuilding of Harmandir Sahib precinct in 1764, after the destruction caused by the invading Afghan forces, saw the growth of these structures. Bunga Shahbadian of Karam Singh Nirmala was among the earliest structures built. This was the place where Surat Singh Giani first arrived and stayed to serve as the head granthi and manager of Harmandir Sahib.

Gianis and the ‘Tower of Scholars’

Unearthing of remnants of Burj Giania has not only put focus on the bunga, but also on the significant contribution of the family of Gianis. Yadwinder Singh Giani, the 80-year-old survivor of the family and the last occupant of Burj Giania, has stated that the building was built in the late 18th century. The superstructure was demolished as part of the ‘Galiara Project’ in 1988. Citing a reference of ‘1930 Report Sri Darbar Sahib’, SS Padam, a scholar on the writings of Surat Singh Giani, mentions that Burj Giania was built in 1778 at a cost of Rs4,500. Another source of information about this bunga is ‘Twarikh Sri Amritsar’, authored by Giani Gian Singh, who mentions its name as Bunga Bhai Gurdas Giani. Apart from the Giani family, this place was associated with the scholarly apprenticeship of Kavi Santokh Singh, author of ‘Sri Gurpartap Suraj Granth’, a classic commentary on Sikh historical tradition, written in Brajbhasha.

The tradition of the Giani family begins with Ram Singh of Chiniot (now in Pakistan), a prominent Sikh of Guru Gobind Singh. His son Surat Singh Giani (d.1804) prepared authentic texts of the scholarly commentary of Bhai Mani Singh, like ‘Sikhan di Bhagatmala’. He shifted from Chiniot to Amritsar to re-establish Bhai Mani Singh’s maryada in running daily routine in Harmandir Sahib. Maharaja Ranjit Singh appointed him as the manager, while Lehna Singh Majithia served as the incharge. His son, Sant Singh Giani, was a spiritual adviser to Ranjit Singh and his name is inscribed in Harmandir Sahib for overseeing the project of gold-plating. He was also instrumental in implementation of other embellishments within the shrine, more specifically the works related to inlay patterns in marble. He is said to have introduced artisans from Chiniot to the city of Amritsar. The intricate wooden jharokhas in the inner city bear a strong Chinioti imprint. Sant Singh Giani’s brother Gurdas Singh was also a well-known granthi and this bunga is mentioned as Bunga Gurdas by Giani Gian Singh.

After Sant Singh Giani’s death, his son Gurmukh Singh Giani was given the responsibility of gold-plating by Hari Singh Nalwa. After the death of Maharaja Ranjit Singh, Gurmukh Singh became an active conspirator in the Lahore court conspiracies. Dhian Singh Dogra, Prime Minister of Lahore kingdom, is recorded to have been murdered at his instigation in the classic work ‘Jangnama Shah Muhammad’. He met his cruel death in 1843, once Dhian Singh’s son Hira Singh took control of the Lahore army. After him, Praduman Singh Giani took over responsibility of the religious routine in Harmandir Sahib. His brother Lehna Singh Giani was associated with ‘Gurmukhi Akhbaar’. Praduman Singh’s son Gurbaksh Singh, a barrister, played a significant role in Sikh education. From the appointment of Surat Singh Giani in 1773 as granthi and manager of Harimandir Sahib, till formation of the Shiromani Gurdwara Parbandhak Committee in 1920s, the family had an unbroken link with the continuity of maryada and management of Harmandir Sahib.

The Gianis also chronicled the history of the Sikhs, read into the deeper meaning of the words of the Gurus and rendered them in languages which were accessible to people at large, such as in Brajbhasha. The significance of the bungas, thus, needs to be understood as an architecture of reading, writing and contemplation against the background of wear and tear of history on account of acts of war, misguided development and passage of time. Invaluable heritage such as that of the bungas must be looked after in such a way that it is available to contemporary historical situations for reflection, practice and contemplation.

The forums for contemplation need to be diverse, located in a variety of social situations and institutions. The SGPC has demonstrated concerns for heritage conservation. It was in 2003 that the General House passed a resolution to set up a heritage cell to preserve the material fabric of buildings of heritage significance within Harmandir Sahib complex. This initiative led to the conservation of the Ramgarhia bunga, Darshani Deori, Gurdwara Baba Atal Sahib and later the conservation of the wall paintings within the sanctum sanctorum.

Memory of a civilisation is embedded in material culture. Experience through time immemorial has demonstrated that loss of material culture leads to a loss of memories and over time alienates communities from their traditions and cultural legacy. The SGPC has a fundamental role to play to protect and conserve Sikh heritage. They are the custodians of this heritage, while the ownership lies with the community.

— Rai has been working on conservation of heritage in Punjab for over two decades. Gill is Associate Professor, Khalsa College, Delhi