Heryana: Young women wrestlers of Haryana are chipping away at patriarchy, medal by medal : The Tribune India

Heryana: Young women wrestlers of Haryana are chipping away at patriarchy, medal by medal 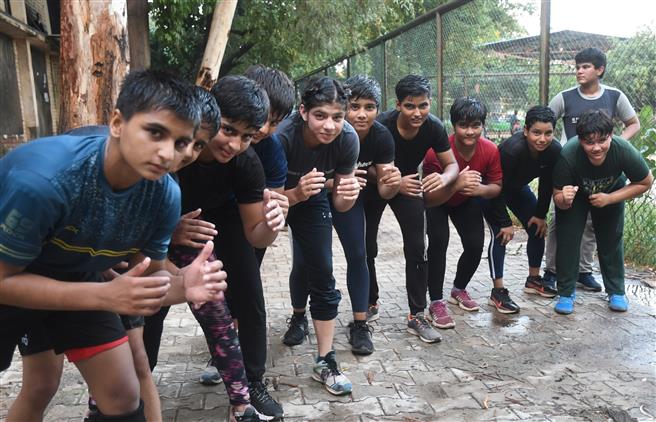 Young wrestlers at CR Stadium, Rohtak, that has been the training ground for Sakshi Malik, and more recently Pooja Gahlot (CW bronze), as well as 20 more international medallists, all trained by coach Mandeep (not in picture). Tribune photos: Ravi Kumar

AS you approach the wrestling hall at Sir Chhotu Ram (CR) Stadium in Rohtak, an interesting sight unfolds — scores and scores of young people, seemingly cast in the same mould. Lithe, muscular bodies, closely cropped wet hair, form-fitting sportswear dripping with sweat. A closer look makes you realise that they are all girls. A decade back, so many girls, and that too dressed as such, would have been an improbable sight in a state with one of the worst sex ratios.

Inside the hall, more surprises await — girls easily outnumber boys, many are practising with male wrestlers. Their moves are strong and smooth, easily throwing boys on the mat.

These muted thuds are slowly chipping away at the patriarchal mores that have been snuffing Haryana’s daughters in the past.

In a quiet corner of the matted hall, Anil Lakhwan (22) is watching his sisters Pinki (20) and Manju (17) grapple. A wrestler himself, Anil has given up the game so that his sisters can continue. A few years back, a son sacrificing for girls of the family would have been unheard of, but now practical sense prevails. Pinki participated in the Junior World Wrestling Championship last year and is now preparing for the Asian Games next year. Her potential has earned her a Welspun Super Sport Women scholarship. Manju, too, has been making inroads into various junior national tournaments. “I shifted to Rohtak four years back. My sisters joined me soon as the facilities here are much better. My father is a daily-wager in our village (Nangla). He can’t support the three of us simultaneously. As my sisters were doing better, I decided to give up. I have now called my father to Rohtak. We sell vegetables to support my sisters,” says Anil.

In another corner, two-time Commonwealth gold medallist Pinki Malik (30) is practising. Playing for over a decade now, she has been a beneficiary of this changing societal landscape, where marriage does not put a full-stop to a woman’s aspirations. Married to an SAI coach in Sonepat last year, she continues to live in Rohtak, visiting her in-laws on weekends. “My in-laws support me fully. There has been a shift in parental thinking as well as expectations,” she says.

Malik might have been speaking for girls like Reetika Hooda (20). “She wasn’t even allowed to play outside her house or in school grounds as her father was very strict,” recalls her mother, Neelam. “Once in school, she was selected for the handball team but her father forbade her from participating. When the school authorities urged him to give his nod, he changed her school,” adds Neelam.

“He eventually relented on the condition that I play some individual game. The coach at CR Stadium said I’d be best suited for wrestling,” says Reetika, who won a bronze at the Junior World Championship in Bulgaria last month and has been selected to represent India at the Senior World Championship in Serbia this month. Her father, Jagbir Singh, is a changed man. “Samay ke saath badlav zaruri hai (Change is necessary with time),” he says. The girl who wasn’t allowed to play outside now drives a Bullet all over Rohtak.

As girls bring in medals as well as monetary rewards, parents are investing more in their daughters. “Girls are doing better as they are more disciplined and focused, giving better results in less time,” says coach Mandeep at CR Stadium, who has changed the course of women’s wrestling in his 12-year tenure. “Out of the 70 girls practising here, at least 20 have won various international championships,” says Mandeep, who has also coached Sakshi Malik, India’s first woman wrestler to win an Olympic medal.

“Whenever our girls get medals in the Olympics, Commonwealth Games or the Asian Games, the number of young girls enrolling in wrestling academies increases,” says Wazir Malik, wrestling coach at Karan Stadium, Karnal.

Geeta and Babita Phogat may have been responsible for bringing recognition and impetus to girls’ wrestling in Haryana as well as India, but for the current crop, Sakshi didi is the superstar they want to emulate. Her Olympics bronze (2016) has set the bar high.

Young Ritika Malik (14), a die-hard fan, can’t get enough of Sakshi. “Didi is from our Mokhra village. When she came after winning the Olympics medal, there was a huge function to honour her. I want to get that same izzat-maan (respect),” adds the young wrestler, who won gold in U-17 World Championship held at Rome in July.

Sarika Malik is another by-product of the Sakshi effect. A family acquaintance, it was Sakshi’s father who took Sarika to the CR Stadium. Sarika is now a bronze medallist in the Junior Asian Championship.

Sakshi’s medal has not only added to the number of women wrestlers, it has also changed the fortunes of the wrestling hall at CR Stadium where she would practice, says Neetu Dahiya, the women’s wrestling coach. “There were no coolers or drinking water facility. Now, we have good equipment, ACs, water coolers,” she adds.

This virtuous circle is expanding continuously. To accommodate the rising aspirants, the number of private wrestling academies has increased exponentially in Hisar, Jind and Sonepat. The government, too, is giving a further push through its sports nurseries across the state, providing monthly stipend to young players.

“The most noticeable change has been a declining trend of son-preference,” says Jagmati Sangwan, women’s rights activist from Haryana. “As our girls bring in more medals, the khaps are buckling under the change. The honouring functions have become more grandiose and mothers of these winning girls are also being feted,” she adds.

Dahiya provides a touch of reality: “Their determination is driven by an underlying fear that if we don’t succeed, we will again get dependent on others. Phir se dabna padega (We would be subjugated again).”

Among India’s first women wrestlers and first woman wrestling coach, Hisar-based Usha Sharma Sihag is a little more scathing: “To do well is our compulsion. If we don’t do well, gobar thapna (making cow-dung cakes) would be the only option.”

Her own story is worthy of a biopic. Born in Dhansu village near Hisar, Usha’s father was a disciplinarian who never spared the rod for his three daughters and son. It was owing to her mother’s silent support that she initially started practising judo without her father’s knowledge. “But when I got selected to represent the state, I had to tell him. A thrashing was inevitable. I stopped eating in protest. He relented eventually on the condition that no medal, no further playing. As there wasn’t much scope in judo, in 1997 when the wrestling coach asked, I switched games. I won gold (48kg) in the first Nationals in 1997. My sister Sarita had also starting wrestling by then and was winning. My father wasn’t happy with our medals and monetary rewards weren’t much those days. He started forcing us to marry. But in the 1998 Nationals, both Sarita and I won gold and the reward money had increased to Rs 11,000 per individual. Suddenly, my father was asking us to include more badam (almonds) in our diet. The hardships made me determined to do something to empower other girls,” adds Usha, who went on to clear the NIS exam in 1999 and was coach to the Indian girls’ wrestling team till 2007.

An ASI with Haryana Police now, Usha and her husband, coach Sanjay Sihag, whom she met at NIS, Patiala, opened a girls-only academy at Sisai near Hisar in 2009 where girls are given training free of cost. “Within the first week, 80 girls had joined,” recalls Sanjay. His academy has produced seven international medal winners in the past, the recent being Pooja Sihag’s Commonwealth gold.

These girls have brought a whiff of freedom to their mothers’ lives as well. Now, it is commonplace to spot moms and dadis at practice. Urmila Malik has been to Ranchi, Patna, Lucknow and Punjab with her daughter Sarika. “This has encouraged other mothers as well as fathers to let women accompany their daughters,” she says.

Perceptions are changing at the ground level, too, says Jagdish Sheoran, wrestling coach at Nidani Academy in Jind. “Earlier, girls would wear knickers or track pants only inside the academies. But now there is no toka-taaki (restrictions) as they roam around the village in these clothes,” adds Sheoran.

Tamanna of Titoli village, Rohtak, who was accompanied by her grandfather to participate in the Federation Cup held in Rohtak recently, is quick to agree. “Those restrictions are a thing of past now.”

Not just in sports, girls are faring better than boys in academics too because of their sincerity, says Reicha Tanwar, former director, Women’s Studies Research Centre, Kurukshetra University. Dr Anita Dua, the present director, speaks of another trend: “In the past six-seven years, more girls are opting for professional courses like MBA, BTech, etc. These four-year courses have automatically pushed back the marriageable age.”

As these sportswomen force acceptance in a strongly patriarchal society by the sheer dint of their hard work, a pink revolution is on for equality and respect, but that will take time and many more medals perhaps.