Himachal opens doors to tourists, on way to a slow recovery

The wipeout of the mainstay summer season has dealt a crushing blow to Himachal Pradesh’s tourism sector. The state has finally opened doors, but with winter approaching, pandemic fear looming and industry adopting a cautious approach, the recovery, if any, will be slow and gradual 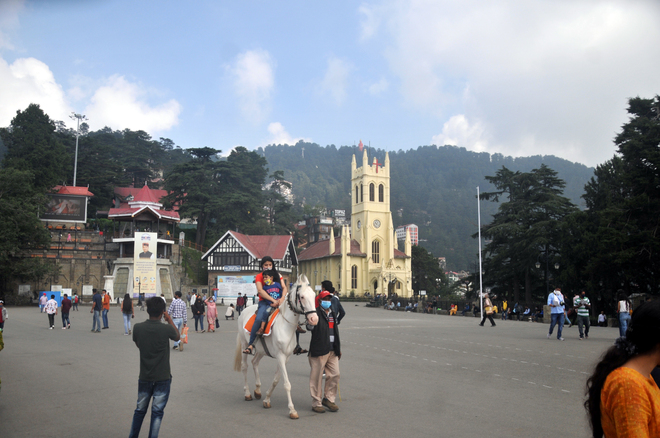 The unrestricted entry has come as a relief for the beleaguered tourism sector in the state, but the hoteliers do not foresee a sustainable footfall in the near future. Tribune photo:Jai Kumar

Winter tourism is a miniscule fraction of what the summer rush entails. So, when the lockdown was announced on March 24, the state’s tourism industry could foresee trouble ahead. The blow came when the entire summer season was wiped out. The state government did allow restricted tourism activity from June 8, but the e-pass and mandatory Covid-negative reports for entry into Himachal meant a negligible footfall. The fear of the pandemic and the overhead SOP costs meant that very few hoteliers ventured to allow guests.

The unrestricted entry from mid-September has come as a relief for the beleaguered tourism sector, but the overall sentiment remains dim. Shimla and Dharamsala hotels witnessed about 25 per cent occupancy on the first weekend after the borders were opened, but hopes of a gradual revival are being tied with government support, since it is mostly small hotels, guest houses and home stays that have chosen to usher in guests.

Sanjay Sood, who heads the Shimla Hotel and Restaurant Association and Tourism Industry Stakeholders Association, wants the government to acknowledge the severe beating the sector has taken. “Till we don’t get support, it will be very difficult for us,” he says, as he lists the demands: soft loans, GST waiver for a year, subsidised power and water.

The lurking fear of the pandemic has resulted in the hospitality sector of the tribal districts of Kinnaur and Spiti valley unwilling to beckon tourists till October 31. The Manali Hoteliers Association, which will start operations from October 1, remains adamant on allowing tourists only after Covid testing at the Kullu border.

Reports of unruly tourist behaviour in the first week of the border reopening — moving around without masks and littering the forests — has only added to the resolve not to open elsewhere. “We cannot take the risk of unforeseen circumstances. It is only after apple harvesting that we will welcome tourists to our pristine destinations in Kinnaur,” says president of the Kinnaur Tourism Associates. No package tours, trekking, camping or jungle safari will be allowed in the Spiti valley, adds Sonam Targey, spokesperson of the Spiti Tourism Society, who points at the limited medical facilities.

Some panchayats in Kullu-Manali have passed resolutions not to allow tourists. “We cannot put the entire community at risk simply for our earnings. We have requested the government to create a Covid testing facility at Bajaura, entry to Kullu district, so tourists are screened before entering,” says Anup Thakur, president of the Manali Hoteliers Association. So far, tourists have been staying in private guest houses or home stays.

Another fallout of the lockdown has been the huge job loss as the hospitality sector provides indirect employment to lakhs of people like taxi drivers, tourist guides, those involved in adventure activities, dhabas, restaurants and small shops. With hotels closed, the purchase of milk, vegetables and fruit from the villages in the vicinity of hotels also stands affected. However, hoteliers are critical of the government for failing to back them.

“I have disposed of the services of all my staff as the situation is unlikely to get normal at least till March. With very limited arrivals and the risk of a Covid-positive person being found in my hotel, I would prefer to remain closed,” says a Shimla hotelier.

But all cannot be bad news. And that silver lining comes from Ashwani Bamba, president of the Upper Dharamsala Hotel and Restaurant Association. “Hotel occupancy is expected to improve to 35 per cent by the second week of October. We are getting queries from the across the country.”

He points to an interesting trend of ‘working from mountains’. “Several IT professionals are asking for hotel rooms for 15-20 days. The government should cash in on the work-from-home trend.”