How CDS can integrate the services

Army, IAF, Navy are set for a more streamlined system of reporting and decision-making with approval of the post of Chief of Defence Staff. The CDS has got a 3-year timeline to bring about ‘jointness’ in operation, logistics, training. Since salaries and pensions can’t be cut, another key task is optimal utilisation of budget and infrastructure 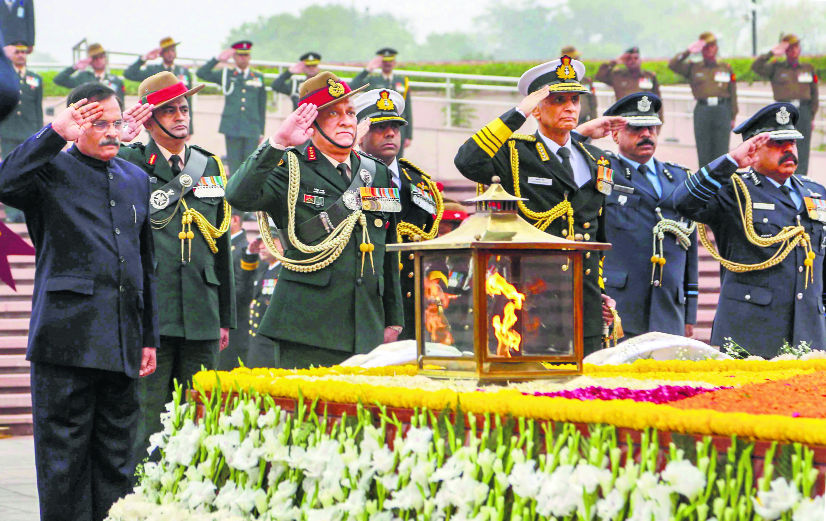 For years, the Indian armed forces have been conducting ‘joint exercises’, but all the while the three services — Army, Air Force and the Navy — never got ‘integrated’ to have commonality of logistics, operations, maintenance, transport, training, support services or even communication networks.

Over the past few decades, the Army, IAF and Navy have grown as three separate verticals with sparse ‘horizontal links’. With no commonality, each service had its own wings doing the same things separately on communication, maintenance, logistics, operations, support services, etc, ‘wasting’ crores of rupees annually in manpower and literal triplication of effort. This is unlike the way other modern-day armed forces have evolved in the past five decades or so.

Newly minted contours for the post of Chief of Defence Staff (CDS), announced by the Narendra Modi government, set a timeline on sorting out some vital issues that are ‘holding back’ integration and jointness of forces.

The directive is ‘transformational’ in nature that looks to alter structures not in tune with modern times where technology is playing a bigger role. The forces now need to live up to the political will and ‘integrate’ with each other.

Modern-day forces like the US or China have integrated theatre or joint commands. It ensures that all resources of the air, land and naval forces are placed under the command of a single person assigned to a geographical area demarcated on military and strategic needs.

China has a total of five commands, while India, despite having lesser number of force and lesser territory, has 19 collectively across the three services.

This is actually the nuts and bolts of the order. The CDS has been given a three-year timeline to bring about jointness in operations, logistics, transport, training, support services, communications, repairs and maintenance.

The government is clear, it wants the CDS to facilitate “restructuring of military commands for optimal utilisation of resources by bringing about jointness in operations, including through establishment of joint/theatre commands”.

Vice Admiral Sekhar Sinha (retd), a former Chief of the Navy’s Western Command, brings out a suggestion: “Right now one doable change is to have cross-appointment of Brigadier and Major General-level officials in the three services. Post them across services in operational divisions.” Tweak the policy to make a ‘Joint Service Operational appointment’ mandatory. CDS is the first step, theatre commands are a distance away, he adds.

One of the key roles of the CDS, as per the order, is “promoting jointness in procurement, training and staffing for the services through joint planning and integration of their requirements”.

Lt Gen KJ Singh (retd), a former Western Army commander, says the appointment of CDS is a welcome step but has a caveat. “Military runs on command, the CDS would have no operational command over the forces.”

He suggests: “Let us have a pilot project to have one joint command in the eastern front. We have had an example of the joint command at Andaman and Nicobar Islands. After the CDS, let’s have one more, learn from lessons, and iron out the issues.”

Air Vice Marshal, SJ Nanodkar (retd) says “theatre commands appear inevitable but with the present force structure, it is an overkill”. In his opinion, a re-alignment of the boundaries of commands of all the three services is needed to bring about geographical convergence. “A theatre command would need huge restructuring in the services and support organisations,” he points out.

Onus is on CDS now

The CDS has been tasked to evaluate out-of-area plans, enhancing use of indigenous equipment and prioritising the weapons and equipment procurement of each service as per the available budget.

This would mean the budget will be told to the forces and the CDS, a military man, will assign funds, said a senior functionary, adding that the era of blaming all ills on the ‘babus’ or the politician are over.

Though the CDS would have no operational control over the services, the newly-created tri-services divisions on cyber and space will be under the CDS, who will be part of the Defence Acquisition Council and Defence Planning Committee.

During the late 1990s, the then Army Chief Gen VP Malik decided to suppress 50,000 manpower (mostly from non-field force) over a period of three years, provided the money saved would be given to the Army for capital purchases.

PM Narendra Modi in 2015 stressed how “modernisation and expansion of forces at the same time is a difficult goal”.

Then Defence Minister Manohar Parrikar set up a committee headed by Lt Gen DB Shekatkar (retd), which suggested 99 points for structural changes in the Army — cutting down flab and reducing revenue expenditure. The Ministry of Defence in 2017 accepted 65.

The armed forces have absorbed a fair amount of technological developments to rightsize the forces. For now, the path is clear, new equipment does not mean a corresponding rise in personnel strength.

Revisiting the idea of chief of defence staff

Agreed upon by mod

Big-ticket buys out of the ambit

The Department of Military Affairs (DMA), which will be headed by the Chief of Defence Staff, will do procurement exclusive to the services. However, capital acquisitions, or big-ticket equipment and weapons procured from foreign and Indian sources, would not be under its domain.

All big ticket acquisitions will continue to be under the Department of Defence, headed by the Defence Minister. The Defence Secretary, an IAS officer, is the administrative head. This way, the government has kept the price negotiation process done for such weapon deals under the civil bureaucracy and not with the DMA, headed by the CDS, a uniformed military man.

The Director General Acquisition would function under the Department of Defence, not the DMA. The DG is the key person to coordinate with foreign and Indian entities. Also, there is no change to Government of India Rules of Business Allocation 1961, which vested the authority for Defence of India with the Defence Secretary.