The flash floods near Amarnath shrine have again raised doubts over the capability to accurately forecast weather. Is the criticism justified, or is the task too complicated? 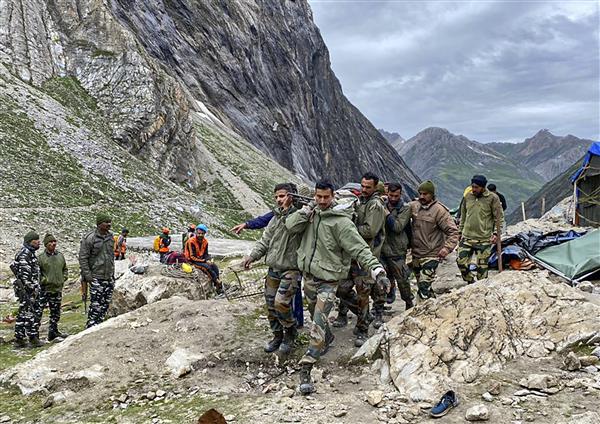 Rescue and relief work in progress near the Amarnath cave shrine following flash floods in the area recently, which left 16 dead. PTI

Triggered by heavy rainfall, the July 8 flash floods near the holy cave shrine of Amarnath resulted in the death of at least 16 persons. This is not the first time that our hilly terrains have witnessed such extreme weather phenomena. Flash floods and cloudbursts are increasingly becoming common in the hill states of Himachal Pradesh, Uttarakhand and Jammu and Kashmir.

The cloudburst and flash floods that ravaged the Kedarnath region from June 13-17 in 2013 had left more than 6,000 dead.

Environmentalists have been linking these natural events of varying intensity to climate change, besides unplanned development and disregard for environmental laws in ecologically-fragile areas.

According to the India Meteorological Department (IMD), what happened at Amarnath was a highly localised rain event. The shrine reported 31 mm rainfall between 4.30 pm and 6.30 pm on the day, which is too low to be categorised as a cloudburst. Flash floods could have been triggered due to rainfall in higher reaches of mountains near the Amarnath cave shrine, it said. An event can be categorised as a cloudburst only when a localised area receives very heavy rainfall of around 100 mm or more within an hour. Meteorologists say the nature of events, besides the tropical nature of our country, makes it difficult to predict well in time.

The IMD has an automatic weather station near the shrine to provide forecasts during the pilgrimage. Surrounding mountainous areas, however, do not have any such station.

Meanwhile, IMD, which is the country’s premier weather forecasting agency, appears to be scoring more misses than hits with its weather predictions. Independent experts have even questioned its announcement of arrival of monsoon in Kerala this year, contending that IMD’s own criteria was not met that day.

Even the southwest monsoon took the IMD by surprise on several occasions this season. Its nowcasts, which predict weather for the next three hours, unlike a forecast that gives prediction for a few days, were found lacking several times, including when a short and deadly system whizzed through the Capital on May 30.

Some of its forecasts of “widespread and heavy rainfall” in the Capital, including an ‘orange’ warning, were stumped by a smattering of clouds.

Interestingly, Delhi has a highly sophisticated prediction system for nowcasts.

So, is our forecaster under pressure of monsoon’s expectations and misreading signs? Is it related to expertise or infrastructure? Or is it the challenge of predicting in times of global climate change in a tropical country like India? The jury is out.

“Nowhere in the world is there a perfect method to predict sudden extreme rainfall. Besides, we are a tropical country with a weather phenomenon like the monsoon. As it is, tropical weather is unstable and now climate change has added another parameter,” says Dr D Sivananda Pai, former director of the IMD’s Long Range Forecasting, and presently director of Kottayam-based Institute of Climate Studies.

Global climate change has led to a shift in the nature of the monsoon. “Given the vast variability and the number of factors involved, no model can predict a dynamic system like the monsoon with 100 per cent accuracy. Understanding its variability across a wide range of time and space scales and providing reliable predictions remain a challenge despite the scientific and technological advances,” adds Dr Pai.

“Earlier, monsoon clouds used to be altostratus, those mid-level, grey or blue-grey clouds covering the whole sky. If you saw those clouds, you knew a storm with continuous, uniform rain is on the way. Now what we get is patchy clouds, causing localised rains,” he says.

“You know the moisture is there but whether they will form a cloud is becoming increasingly difficult to predict. It is the same in all tropical countries. Upper latitudes and European countries have more stable weather, making it easier for forecasters,” explains Palawat.

There is lack of an adequate number of doppler radars — the ones with a smaller range of 50 km can give two to three hours of warning in hilly regions.

“J&K, Himachal and Uttarakhand need at least 10 radars each to read the intensity and magnitude of a storm brewing in hilly terrains,” says an official, not wishing to be named.

An insufficient number of radars in the upper mountain reaches, lack of scientific models and, perhaps, analysis of available satellite and scientific information may be the other reasons preventing the weather office from foreseeing extreme climate conditions.

“As extreme weather phenomena become frequent, advanced models to analyse observations and relevant computing are needed, even though sudden storms and floods may still take us by surprise,” the official added.

If you travel north from Delhi, the first doppler radar you will encounter is at Patiala, and then Jammu, Srinagar, Kufri and Mukteshwar.

“The fact is we have neglected the Himalayas and focused more on coasts and cyclones. We need more radars in the hills. Several states do not have even one. In many countries, private companies are allowed to install radars. Here, it is not permitted due to security reasons. Our satellite feed is okay but you need high expertise to read that. If the density of radars improves, nowcasts can be improved. The Yatra routes should be equipped with adequate weather forecasting radars. With a rise in the frequency of extreme weather events, nowcasts or providing advance warning around three to six hours prior to the event is needed,” the official says.

Currently, there are around 33 radars located at various places across the country to track weather systems and cloud bands and gauge rainfall with a coverage of 200 to 500 km. The IMD is planning to procure 11 more radars for localised weather — rainfall, cloud formations, thunderstorms, lightning real-time.

Standing by the IMD, former Director General and currently adviser, IRADe, Prof Ajit Tyagi says, “We have very good models and systems in place. We have not missed a single cyclone. Major western disturbances have been forecast correctly. Our monsoon predictions are appreciated worldwide. No model can be 100 per cent accurate. Besides, the monsoon is a complicated system — every year being different from the previous one. Space and time variations make it a big challenge.”

“With global climate change, there are parameters that cannot be measured accurately. But then, uncertainty exists in other sciences as well. However, there is always room for improvement,” concludes Dr Pai.

Governed and complicated by multiple parameters spanning oceans and continents, the southwest monsoon has the IMD in jitters throughout its four-month June-September stay.

“There are examples of similar systems in regions like parts of the US, Africa and Australia, but what we get in this region is the most energetic. India is truly blessed,” says Dr D Sivananda Pai.

India’s incredible landmass and the vast Indian Ocean form the perfect setting for the system as it travels from Mascarene High, a high-pressure area around Mascarene Islands in south Indian Ocean.

The southwest monsoon accounts for 80 to 90 per cent of the country’s total rain, irrigating nearly two-thirds of India’s agricultural tracts while the northeast monsoon does the rest.

Dr Pai sees no fault with IMD’s forecasting system. “Our forecasting is top level. Our predictions, especially on cyclones, have been appreciated worldwide. India has in place a well-resourced research programme on mission mode — Monsoon Mission — supporting a number of projects led by international groups,” says Dr Pai, director of Kottayam-based Institute of Climate Studies.