Its scope widened to disseminate culture through the globe, Indira Gandhi National Centre for the Arts, which opens to public today at its temporary facility at Janpath Hotel, plans a database of artists and art forms in villages 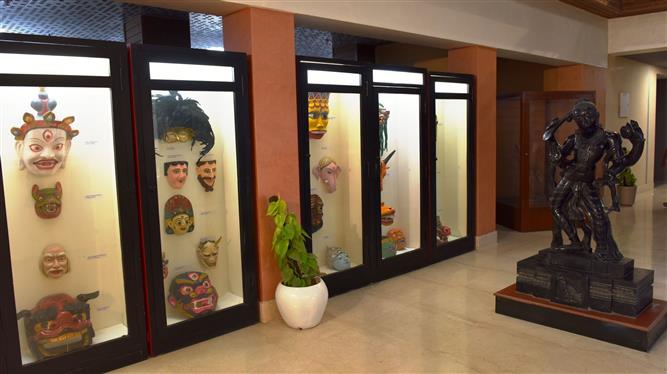 The new premises of the IGNCA, which open to the public today.

AT the inauguration ceremony of the new premises of the Indira Gandhi National Centre for the Arts (IGNCA), its chairman, Ram Bahadur Rai, startled everyone when he claimed that in modern India’s cultural history, there have been three decisive dates — 1784, when Sir William Jones formulated the Asiatic Society; 1900, when Lord Curzon enunciated his vision for India’s heritage; and the third being the inauguration of this premises that heralds its new role and place in India’s cultural polity. One wondered what this new role was.

The IGNCA was set up in 1987 as a centre of research of all art forms and their dissemination; “enveloping them in a complementary and non-demarcated vision”. There are four research divisions — Kalanidhi, the multi-form library with more than 3,50,000 books and manuscripts; Kalakosa, the study and publication division; Janapada Sampada, the lifestyle study division; and Kaladarsana, the exhibiting and performing arts division.

According to its member-secretary, Dr Sachchidanand Joshi, “The IGNCA was conceived essentially to be a repository of Indian culture. Now its scope has been widened immensely, to disseminating culture through the globe, in a proper perspective. There is the ‘shastra’ (learning) and also its ‘prayog’ (practical application). Also, we have to open up and democratise the collections we have, and not merely hold these. Digitisation of our collections — literature, paintings, music — is equally important. The National Cultural Audiovisual Archives was set up by us (impressively, more than 31,000 hours of audio and visual material have been digitised). We have set up portals like the Vedic Heritage Portal, which are our tools of propagation. Another initiative is starting the post-graduate diploma courses in various research disciplines (conservation being one).”

Continuing on outlining the expanded role of the centre, Dr Joshi added, “The Ministry of Culture’s National Mission on Cultural Mapping has now been taken over by IGNCA; we plan to work with all states as well as private players, besides schools, Nehru Yuva Kendras, etc, to properly create a database of artists and art forms in villages. We will work in a phased manner, starting with a few villages. Another new project is setting up the design museum at the Red Fort.”

IGNCA has moved from its existing premises on Jai Singh Road, Delhi, as part of the new Central Vista project, to the refurbished Janpath Hotel, which had been lying vacant for some time. This, however, is only a temporary abode until a new facility is set up at Jamnagar House, which is likely to open in 2024. The Janpath Hotel premises boasts of beautifully lit laboratories, an auditorium with a seating capacity of 150 persons, an outdoor amphitheatre, exhibition spaces and the library. Apparently, the rooftop, too, will be used as a venue for outdoor informal interactive sessions. The IGNCA shop is at the building’s entrance; a cafe is on the cards. The premises open to the public today.

One wondered at the need to move yet again, in two to three years to Jamnagar House considering that the total area available in Janpath Hotel is nearly 5.5 acres, which seems adequate. Dr Joshi, however, explained, “We are quite cramped here; we have more than 300 persons working on various projects. We want to focus on research by young students. On the new campus, we have planned residential dormitories for 100 national and international scholars, besides a guest house for about 50 persons. So we needed more space.” The Jamnagar House premises will give the IGNCA around 15 acres of carefully planned space.

Apparently, for decades, many of the very valuable artefacts and paintings owned by IGNCA have remained locked up and exhibited in part only, periodically, due to the lack of display space at the old premises. The eventual permanent space at Jamnagar House aims to become a living centre of the arts and realise the potential it was set up for.

One does not wonder at Dr Joshi’s obvious, but discreet, satisfaction at IGNCA’s slow emergence from its chrysalis. He adds, “Five years ago, IGNCA was a largely unknown institution. Today, in the world of culture, we are being talked about.” Somewhat of an understatement!