INFOCUS Agriculture: Enable, incentivise farmers to save every drop

There is a wide gap between availability and adoption of water-saving technologies in agriculture. The situation calls for innovative strategies and incentivisation. One such strategy has been piloted in Punjab since 2018 with the Pani Bachao Paise Kamao scheme, wherein adoption of water-saving technologies gets incentivised as an amount equal to the units of electricity saved by operating a tubewell sparingly is paid to the farmer through Direct Benefit Transfer. 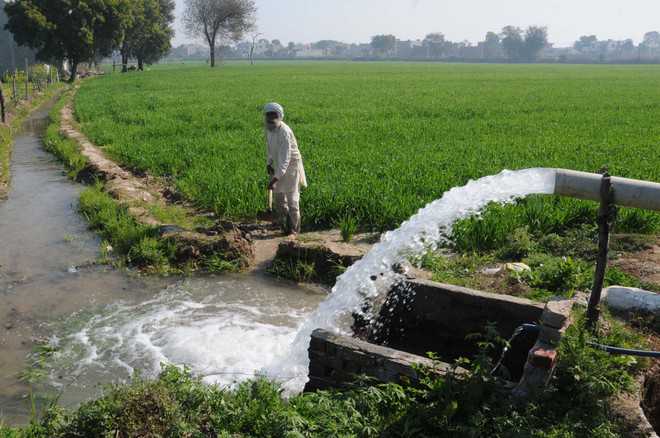 The total availability of water in Punjab from all sources is 53.06 BCM (billion cubic metres) against the total demand of 66.12 BCM for various sectors, of which agriculture accounts for 62.58 BCM.

The total availability of water in Punjab from all sources is 53.06 BCM (billion cubic metres) against the total demand of 66.12 BCM for various sectors, of which agriculture accounts for 62.58 BCM. So, there is a gap of 13.06 BCM, which is met through exploitation of groundwater resources over and above the recharge. According to the Central Ground Water Board, within the next 25 years, groundwater in Punjab will fall to levels beyond extraction if the exploitation continues at the current rate.

The irrigation requirement of the rice-wheat cropping system is 200 cm, whereas for maize-wheat and cotton-wheat it is 77.5 and 87.4 cm, respectively. Despite high water requirement, the area under rice in Punjab has shown unrelenting increase even in the post-Green Revolution period (from 20.12 lakh hectares in 1990-91 to 31.42 lakh hectares in 2019-20). The concomitant increase in the number of tubewells from 8 lakh to 14.76 lakh was accompanied by the conversion of centrifugal to submersible pumps which extract water from deeper aquifers. In recent years, rice has penetrated into the traditional cotton belt districts of Fazilka, Bathinda, Mansa and Sri Muktsar Sahib, covering 62% acreage in the kharif season of 2020.

In Punjab, canal and tubewell irrigation cover 27% and 73% area, respectively. In view of the convenience of tubewell irrigation in the central and north-eastern districts, the canal network shrunk due to lack of use and maintenance. On the other hand, farmers in areas with poor-quality groundwater (south-western districts) tended to capitalise more on the canal network even at the risk of waterlogging and salt accumulation on the soil surface. In these districts, an area of 9.13 lakh hectares is irrigated through canals compared to 2.31 and 0.32 lakh hectares in central and north-eastern districts, respectively.

According to an isotopic study conducted by the National Institute of Hydrology, Roorkee, the recharge by the Sutlej river is almost nil whereas the Beas river recharges groundwater to a low extent. The erratic monsoon has accentuated these poor recharge conditions. The average annual monsoon rainfall had been below the long-term average (492 mm) in 17 out of 20 years since 2000.

During 2019, the peak season demand for electricity was 13,633 MW, which came down to 13,150 MW during 2020 due to the Covid lockdown. This year, the peak demand has shot up to over 14,000 MW. This high demand stems from greater dependence on groundwater due to the weakening of the monsoon currents resulting in a drier last week of June (60% less rainfall than normal in 2021).

In earlier decades, PAU developed a number of technologies for water-saving — mulching in maize and sugarcane (1977 and 1979), alternate wetting and drying in rice (1981), standing water for two weeks only after transplanting (1989), bed planting of wheat (2002), bed planting of cotton and first irrigation after six weeks (2005), tensiometer (2006), laser leveller (2007), ridge/bed transplanting of rice (2007) and direct seeded rice (2010). Even the simplest technology of alternate wetting and drying in rice, capable of saving 20% irrigation water without any productivity loss, has not found wide adoption due to lack of value attached to water and power. Laser land levelling technology having the potential to save 15% water, however, gained acceptance, more due to benefits of increase in the field area due to fewer bundhs and ease of flood irrigation.

After 2010, the following three water-saving technologies have shown promise in the fields and need to be promoted further.

Short-duration parmal rice varieties developed by PAU such as PR 121 (2013), PR 126 (2016) and PR 128 (2020) mature 3-5 weeks earlier and help to save 10-15% water compared to long-duration varieties such as Pusa 44. The area under short-duration varieties in the state has increased from 37% in 2013 to 71% in 2020, which goes to the credit of our farmers. These varieties can be grown without significant yield penalty with June 20 as the transplanting date, with some of them (PR 126) performing best with July transplanting. The delay in the transplanting date helps in the avoidance of the high evaporative demand period.

Tar wattar refers to an innovative technology of direct seeding of rice (DSR) under full moisture (tar wattar) using a specially designed drill (Lucky Seed Drill) having a pre-sowing weedicide spraying attachment. This technology, recommended ahead of the 2020 rice crop season, offers up to 20% water-saving (due to bypassing of puddling and reduced frequency of irrigation), besides greater recharge possibilities and better yield of the succeeding crop due to the removal of hardpan. The refined DSR technology was adopted by farmers on 5.19 lakh hectares (20% of the parmal rice area) showing a sharp increase over the 65,000 hectares in 2019, with Covid- induced labour shortage serving as a catalyst. This year, the Punjab Government aims to cover 10 lakh hectares under this technology as a major water conservation measure.

PAU recommends surface and subsurface drip irrigation in various crops. The drip irrigation system is a cost-intensive but high water-saving package which can be operated with solar energy and will increase the irrigation acreage per unit of available water through water storage structures. The high cost of the system is compensated to an extent by the yield advantages but needs extensive capital support to take it to a larger scale. Horticultural and wide-row field crops (sugarcane, cotton, maize, sunflower, potato etc.) can provide a good starting point.

There is a wide gap between the availability and adoption of water-saving technologies in agriculture. The situation calls for innovative strategies and incentivisation. One such strategy has been piloted in Punjab since 2018 with the World Bank and J-PAL-supported Pani Bachao Paise Kamao scheme. In the first phase, the scheme was piloted on six electricity feeders in the districts of Jalandhar, Hoshiarpur and Fatehgarh Sahib; in the second phase, the scheme is to be extended to 250 electricity feeders. Under this scheme, the adoption of water-saving technologies gets incentivised as an amount equal to the units of electricity saved in operating a tubewell sparingly (compared to previous years) is paid to the farmer through a DBT mechanism. Thus, while the electricity subsidy expenditure of the government remains constant, the saving of electricity used for operating tubewells translates into saving of groundwater. For this scheme to be effective, water-saving technologies have to be promoted and implemented. PAU has been able to get farmers under the pilot project to adopt alternate wetting and drying and short-duration varieties in rice, laser land levelling, paddy straw management and wheat sowing with Happy Seeder in three selected feeders.

The groundwater situation in Punjab is dire. Measures are needed at multiple levels, including power policy, cropping pattern and technology. These elements need to be organised into a cycle. Otherwise, it will be too late and future generations will not forgive the current one for doing nothing despite knowing everything. 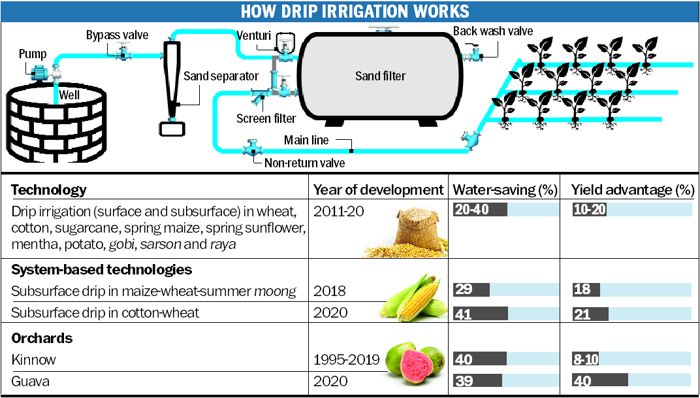