Innovation is the key to tackling agrarian crisis

The government should incentivise farmers to grow crops other than rice and wheat by declaring its intention to purchase them at the MSP. Protein-rich pulses can be grown in Punjab. Such crops not only consume less water than rice and wheat but also add nitrogen to the soil, thus improving soil fertility. Punjab used to grow yellow maize. Drought-tolerant maize hybrids would be perfect for cultivation in the state. There are more than 200 industrial uses of maize. 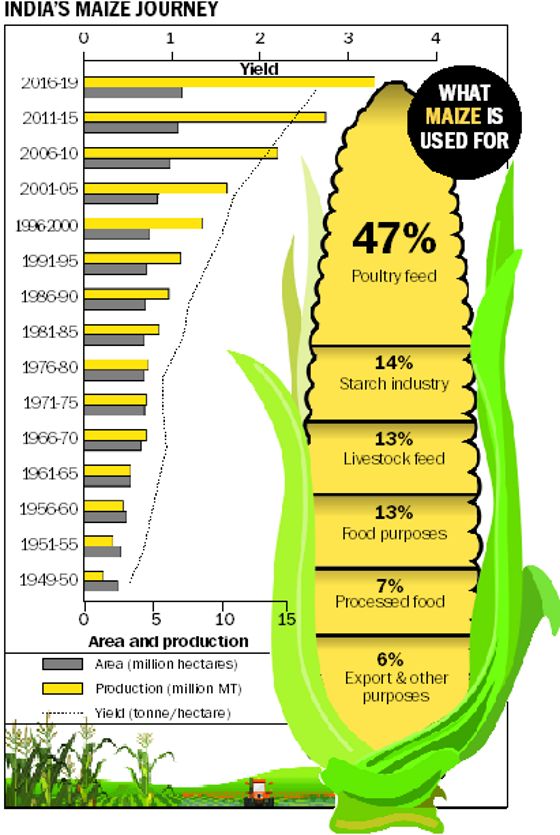 FOR an agricultural system to be considered sustainable, it must produce abundant food without depleting natural resources and polluting the environment. It must not render the future generations bereft of resources to meet their needs. Sustainable agriculture is a system of producing food that is healthy for consumers, humane for workers, provides fair wages to farmers and farm workers, and supports and uplifts rural communities.

While the Green Revolution of the 1960s helped India achieve self-sufficiency in foodgrains and shed its pejorative ‘ship-to-mouth existence’ image, it turned out not to be sustainable, as it depleted our soils of nutrients, increased our dependence on inorganic chemicals, polluted our waters, soil and air, and dried up our water aquifers. Not only that, our crop diversification disappeared, having been replaced by the prevalent rice-wheat monoculture.

Punjab, Haryana and western UP were at the forefront of the Green Revolution and have paid a heavy price for ensuring food security of the country. The adoption of the rice-wheat monoculture and burning of crop stubble (residue) have depleted soil organic matter and reduced the water-holding capacity of the soil. The current organic carbon level in Punjab’s soils is a dismal 0.3% (about 50% of soil organic matter is carbon; soils containing less than 1% organic matter are found in deserts).

As India desperately needed to increase food production, especially of the main food staples, the rice-wheat cropping pattern was promoted by the government. Minimum support price (MSP) was established and the Union Government began to purchase only rice and wheat at the MSP. Farmers got hooked to the rice-wheat rotation as the MSP-based system provided an assured marketing outlet to them for their produce. They adopted this system at the cost of losing crop diversification, environmental degradation and depletion of natural resources. Important crops such as oil seeds and pulses progressively disappeared.

Incentivising the farmers to grow rice and wheat to achieve food security was a short-sighted policy. Had the government purchased other crops as well at the MSP, crop diversification would not have disappeared.

Post-Green Revolution, it is often heard in scientific circles that crop production has reached a plateau — productivity (per hectare yield) is stagnant. This is precisely because of the large-scale adoption of the rice-wheat system in the ‘food bowl states’ of Punjab, Haryana and western UP. Today, the rice-wheat cropping system is quoted as a prime example of an unsustainable agricultural system in the world.

What should be done to turn the tide? We present solutions from two perspectives, as one of us (Kang) is a scientist and the other (Pangli) is a progressive farmer and a farmers’ leader.

Crop diversification: The government should incentivise farmers to grow crops other than rice and wheat by declaring its intention to purchase them also at the MSP. For example, protein-rich pulses can be grown in Punjab. Such crops not only consume less water than rice and wheat but also add nitrogen to the soil, thus improving soil fertility. Oilseed crops can also be grown. These can save on foreign exchange also.

Area under rice cultivation must be reduced by at least 40%. Alternative crops should be grown. Conventional rice cultivation using the flooding technique generates methane, a greenhouse gas whose global warming potential is more than 80 times higher than that of carbon dioxide.

Punjab used to grow yellow maize. Drought-tolerant maize hybrids would be perfect for cultivation in the state. There are more than 200 industrial uses of maize. However, the government must set up maize processing industry.

Increase forest cover: According to the National Forest Policy, 33% of the total geographical area should be under forest/tree cover. Punjab’s forest cover is 3.7%. Through the state government’s efforts, this area reportedly increased by 11.63 sq km in 2020. Further efforts are needed to sequester carbon to combat climate change.

State agencies’ role: Markfed, Punjab Agro, Pungrain, and Punsup have been divested of their mandates and have become mere procurement agencies for rice and wheat. Markfed and Punjab Agro can be leaders in processing and marketing of crops like Indian (PAU) canola, whose oil is better than the Canadian canola oil.

Cooperatives: Farmer-producer organisations (FPOs) can help in mobilising and organising vulnerable and unorganised farmers engaged in various economic and social activities at the village level, as done in Israel.

Food and nutritional security: To combat hidden hunger, biofortification of crops with iron, zinc and provitamin A is needed. Food labelling and food safety with cost-effective agricultural technology are key sustainable agriculture issues. These should be included in the manifestos of the political parties, indicating the timeline for implementation and adoption.

Production-entrepreneur linkage: Production must be linked to entrepreneurship. Small-scale industry must be supported, especially in rural areas.

Academic inbreeding: In order to reduce ‘academic inbreeding’ in PAU, an appropriate fund must be earmarked for at least one-year training of PAU scientists (at least five per year) in the top universities in advanced countries to infuse fresh ideas into their research, teaching and extension.

Agricultural Think Tank: It should be established to include prominent agricultural scientists from both India and abroad. Punjab has produced three World Food Laureates — Dr Gurdev S Khush, Dr Surinder K Vasal, and Dr Rattan Lal. Such scientists should be included in the think tank. Innovative approaches and technologies are needed to help farmers overcome the agrarian crisis.

Finally, everyone involved in the food system — growers, food processors, distributors, retailers and waste managers — should play a role in ensuring a sustainable agriculture system. Policymakers need to ponder over Henry Ford’s statement: “If you always do what you’ve always done, you’ll always get what you’ve always got.”