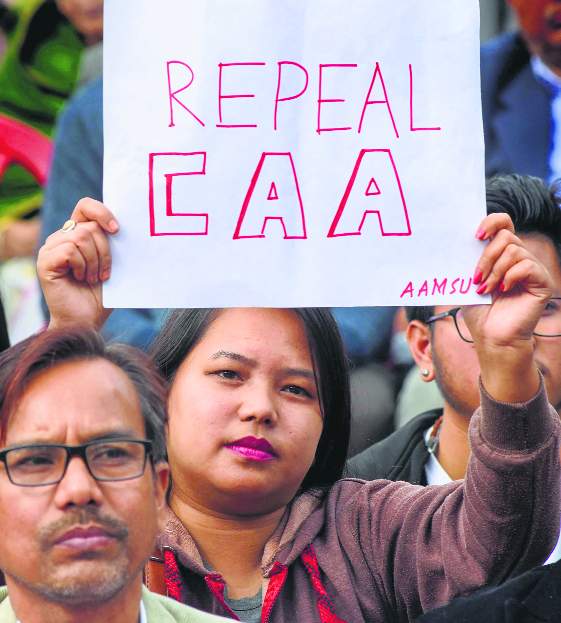 In Assam and across the region, opposition to the CAA provisions has been intense.

The Citizenship (Amendment) Act has led to several northeastern states working out legal frameworks to insulate residents from any undesirable repercussions. The CAA is meant to grant Indian citizenship to non-Muslim minorities from Bangladesh, Pakistan or Afghanistan who seek refuge after facing religious persecution.

In its second attempt to pass the legislation, the Modi government tweaked the provisions to exempt the areas under the Sixth Schedule, which meant non-Muslim refugees from the three countries, who are going to be granted Indian citizenship, will not have any land or trading rights in the autonomous regions.

However, barring a few, various N-E groups still have issues with the law. Student unions and civil society groups from Nagaland, Tripura, Assam and Arunachal Pradesh have claimed that the Act seeks to divide the people of the region.

As per Article 244 of the Constitution, which was passed by the Constituent Assembly in 1949, the Sixth Schedule has provisions for the exclusive administration of tribal areas in Assam, Meghalaya, Tripura and Mizoram.

It seeks to safeguard the rights of tribal population through the formation of Autonomous District Councils (ADCs), which have varying degrees of autonomy within the state legislature. In all, there are 10 areas that are registered as autonomous districts — three in Assam, Meghalaya and Mizoram and one in Tripura.

As per the tweaked law exempting Sixth Schedule areas, no one who would be given Indian citizenship can either reside or settle in the 10 autonomous districts, nor enjoy benefits extended to the tribal population.

Further, the laws enacted by ADCs with the powers bestowed upon them by the Sixth Schedule will not be scrapped by the CAA.

Meanwhile, several N-E states are taking additional measures to insulate their native populations from the effects of CAA:

The Cabinet recently passed an ordinance making registration on entry mandatory for visitors who intend to spend more than 24 hours in the state.

Wilful defaulters are liable to be punished under Section 176 or 177 of the Indian Penal Code, which could mean financial penalty, or imprisonment, or both.

The state is working on a Register of Indigenous Inhabitants of Nagaland (RIIN) to detect outsiders living in the state as well as ensure that the demographic pattern does not change once CAA is implemented. The state government has also taken up the issue of RIIN with the Centre.

The state government has shared the outcome of a discussion with various stakeholders with the Union Ministry of Home Affairs to protect native people there.

The MNF government passed the Maintenance of Household Registers Bill and sent it to the MHA for obtaining presidential nod.

The legislation seeks to provide a credible individual identification system and prevent “usurpation” of benefits of development schemes by those who are not entitled, while also provisioning for a comprehensive database of residents to be maintained.

The BJP-led government has ratified the Manipur People’s Protection Bill and dispatched it to the Centre.

The proposed law defines ‘Manipuris’ and ‘non-Manipuris’, and seeks to regulate the entry and exit of the latter to protect interests of the former.