It’s the turn of consumers to support farmers

Share of Major States in Marketed Surplus and Procurement of Wheat 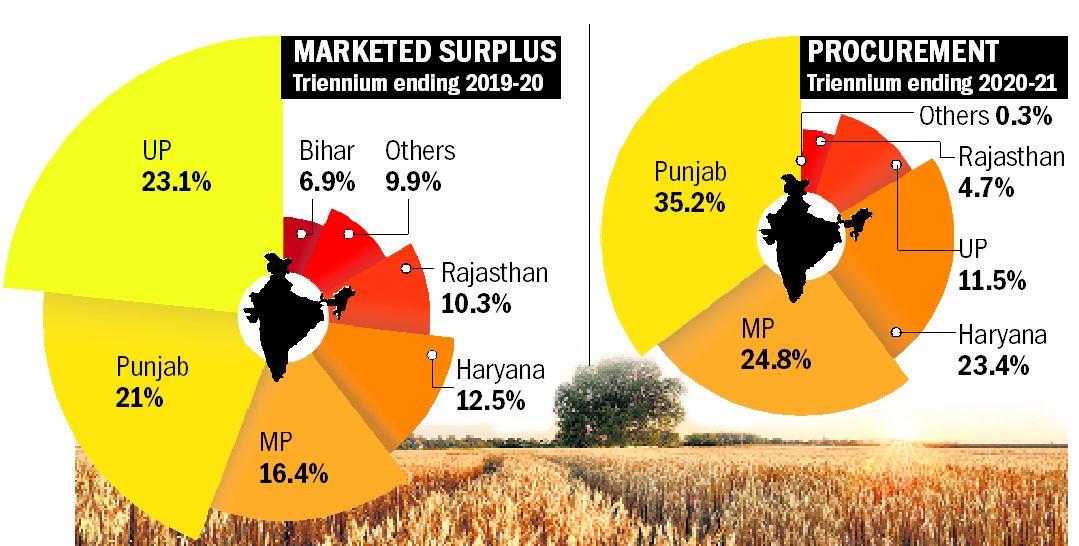 PROMOTING a free market economy in agriculture in India has been a topic of debate since 1991 when reforms in the industrial and financial sectors were introduced. Then came the WTO agreement in 1995 to which India was one of the first signatories. Under this agreement, quantitative restrictions on agriculture trade were dismantled, bound tariff rates were negotiated for various crops and maximum level of agriculture subsidies were defined for developed and developing countries. It was argued that wide-scale reforms were required to unshackle growth in agriculture. Last year, the Union Government enacted three laws with the avowed aim of making agriculture markets more competitive for better harvest prices to farmers as they would be able to sell their produce outside the designated APMC markets to any buyer (processor, aggregator, bulk buyer, trader, FPO, etc.).

In the past 10 years, perception is being created that benefits of MSP and public procurement accrue largely to only 7-8 states, whereas in other states farmers face market forces and receive prices of their produce accordingly. Further, the narrative is being built that MSP has outlived its utility in the wake of an increase in foodgrain production in states other than Punjab and Haryana, and buffer stocks reaching as high as 80 million tonnes. The food subsidy bill is becoming burdensome, warranting public procurement to be curtailed, rationed and undertaken in the consuming areas itself in the name of rationalisation and cost-effectiveness. The MSP and public procurement system needs to be analysed for its role and benefits against the so-called free market economy in Indian agriculture being promoted through the Acts of 2020.

The Agriculture Prices Commission, now called Commission for Agricultural Costs and Prices (CACP), and the Food Corporation of India were established in 1965 to recommend the MSP of various crops and procure foodgrains for the public distribution system (PDS). During that period, India was facing severe food shortage and depended on food imports. The objectives of the MSP were to incentivise production through better and assured harvest prices, backed by assured marketing by the government, and making food available and accessible to poor consumers at low prices for overall national food security through PDS. Assured prices encouraged farmers to adopt new technologies in the form of improved seeds, chemical fertilisers and making private farm investments in irrigation (tubewells), tractors and other farm machinery. The government created market infrastructure under the APMC Act to handle the produce, facilitated tubewell connections and provided institutional loans at subsidised interest rates. Punjab, Haryana and a few other states adopted new technology and diverted land and other resources towards the production of foodgrains. Consequently, India not only became self-sufficient in food but also an exporter of rice and wheat. The policy also deliberately kept food prices low through MSP to protect the interests of consumers when improved technology had been leading to a substantial increase in agriculture productivity and production during the Green Revolution and thereafter.

Punjab was at the forefront to harness the potential of improved technology. Its foodgrain production increased from 33.9 lakh tonnes in 1965-66 to 306.9 lakh tonnes in 2019-20. Other irrigated regions also followed and benefited to the extent their agro-climatic conditions, natural resource endowments and infrastructure allowed. However, during this process, Punjab and other states overexploited their natural resources of land and water.

The MSP and public procurement system is effectively implemented for wheat and paddy in production-surplus states like Punjab. In states like UP, public procurement at MSP is limited, while Bihar represents the case of a free unregulated agriculture market where the APMC Act was abolished in 2006. Farm harvest prices were examined against MSP for paddy and wheat in these states. MSP was effectively realised by the farmers in Punjab, whereas wheat and paddy prices in the immediate harvest season were lower than the MSP in UP and Bihar. For instance, FHP (farm harvest price) was equal to MSP in Punjab, whereas it was lower by 7-14% (paddy) and 4-5% (wheat) in UP, and 20-25% (paddy) and 10-20% (wheat) in Bihar during 2013-18. It indicates the economic benefits of the presence of the public sector in buying operations. Further, freeing the agriculture markets from the APMC Act in Bihar did not result in better price discovery of the produce for farmers. Conversely, in Punjab, regulated markets ensured MSP to the farmers through public procurement and aggregation of produce at APMC markets as well as better market infrastructure.

The MSP is announced for 23 crops, but is received by the farmers for wheat and paddy in a few states due to economies of scale of procurement operations. In other states, market prices are lower than MSP. This raises many questions about the relevance of MSP. First, it defies the objective of MSP of providing economic incentive for production to farmers, covering the cost of production. It was implicitly presumed that higher demand than supply in deficit regions would result in higher market prices than MSP, which in reality is not happening, causing economic losses to farmers. Second, what is the logic of announcing MSP when it is not assured to the farmers?

It is claimed that the new farm laws will create an alternative market set-up outside the APMC designated market place and improve marketing competitiveness for better price realisation. Producer-sellers are very large in number, poor, less educated or uneducated, unorganised and ignorant about the harsh outcomes of free market forces. On the other hand, buyers (traders and corporates) are relatively less in number, resourceful, better informed, well organised, equipped with demand and supply forces’ information and well connected for leveraging financial resources. MSP is still relevant for agricultural growth because output prices have an assumed primary role. The agriculture sector recorded 4% growth largely steered by prices during the 11th Five Year Plan. Higher prices raise income of farmers directly and subsequently help in the adoption of modern agricultural production technologies and practices for higher productivity. In large parts of the country, there are still large gaps in technology adoption due to deficiency of capital, which can be covered by raising profitability of the farming system. Agriculture engages about 50% of the workforce and ensures food security for the nation, thus the need to ensure livelihood security and better living conditions for farmers. Let the MSP be made mandatory for all transactions and the effect of higher agricultural prices be transmitted to consumers. Farmers have supported consumers through low food prices in the past and now it is the turn of consumers to support farmers. Poor consumers can be covered by expanding the food safety net, if needed, which will also help in bringing in demand-supply balance.

The authors are Registrar and VC, respectively, PAU, Ludhiana