Kasturba Gandhi: In love with the Mahatma

Living in Mahatma Gandhi’s shadow and subject to his experiments with truth, the spotlight doesn’t often turn towards Kasturba’s relationship with the man she married at the age of 13 and lived with for more than 60 years 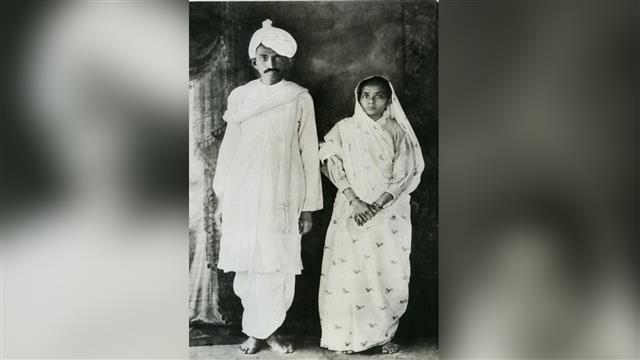 A bond world didn’t explore: Mahatma Gandhi with Kasturba on their return to India from South Africa.

BA was unlettered; Gandhi, a scholar. Ba was a housewife; Gandhi, a fighter within, a stubborn man. Fed stories of Devi Anusuyya, Sita and Savitri, Ba was “trained” to be a loyal wife; he experimented with a sex worker to test his wife’s “emotional fidelity”. Ba… she knew nothing but to forgive. This narrative plays out in Saif Hyder Hasan’s new play Dearest Bapu, Love Kasturba.

The premise of the play is the relationship between Mahatma Gandhi and his wife and is etched out through “letters never written”. Living in Mahatma Gandhi’s shadow and subject to his experiments with truth, the spotlight doesn’t often turn towards Kasturba, leave alone her relationship with Gandhi. This play could well be the first such attempt on stage. Hasan’s narrative, “based on facts”, turns the bonding of six decades into letters exchanged between them — from the time of their engagement at seven years of age till death. The setting is surreal… Kasturba’s soul speaks to Gandhi and he answers her questions. She calls him Bapu, he calls her Kastur. They exchange memories, complaints, regrets and recall episodes of disagreements, passion and purity. Ba chides, fights, protests, accuses; Gandhi admits, submits and explains his side.

Zeenat Aman returns to acting after 25 years, and that too as Ba, who was just the opposite of her romantic, free thinker, beauty queen image. On stage, however, she fires with faultless lines, declaring that she and Bapu “were equals”, both in age and relationship, in a tone that’s euphonic and in strength that defies her age.

“Returning with such a role has its own weightage. Ba was so strong. She played multiple roles, married at 13, reared up children, observed abstinence at the whim of the Mahatma at a young age of 30, walked the walk with Gandhiji in freedom movements, inspired women, went to jail even as her health deteriorated, underwent emotional turmoil in her husband’s absence… Playing her wasn’t a cakewalk,” she says. An emotional roller-coaster story of almost every woman and yet only Ba’s, the play — that has also been staged in Mumbai, Hyderabad, Bangalore — leaves one with an urge to know more about the duo’s relationship.

Tushar Gandhi, the great-grandson of Mahatma Gandhi, is matter of fact: “It was a long and fruitful relationship between the two, but it is true that Ba had to bear the brunt of the transformation that Bapu was going through. There is no doubt that despite going through turmoil, there was tremendous love and unshakable trust between them. Ba never felt the resentment, although she had to give up a lot for the sake of her husband. Probably she did it for the sheer love for him and the realisation that he was evolving into something which is beyond her capacity to understand.”

However, he firmly believes that “without Ba, Mohandas wouldn’t have become Mahatma Gandhi. Her contribution to his life and the freedom movement has been criminally neglected by history.”

Author Neelima Dalmia Adhar’s 2016 book on Kasturba Gandhi, titled The Secret Diary of Kasturba, notes that Bapu and Ba shared a very intricate and complicated relationship. “Ba was the quintessential Hindu wife. Even though there were differences between them, she was forward thinking, straight forward and asserted her rights. She was forthright even in sexual interaction right from the time she came into the house as a bride at 13. She didn’t allow the rebel in her to die down,” she says.

To take things lying down was not in Kasturba’s nature. She would express her displeasure boldly. She stood up for her children’s right to go to school when they were in South Africa. When Gandhi told her that he would homeschool them, Ba banged her head against the wall and tore her hair in protest. Similarly, the vow of celibacy may have been forced upon her all of a sudden, but it was not a unilateral decision. And then there were his strange experiments with celibacy wherein he would lie bare with nieces and grandnieces and Ba had to tolerate all that.

A painful part of their relationship was constant conflict over their son Harilal. He had won a scholarship to London, but Bapu gave it to someone else in the party and that made Harilal go against his father, leading to further erosion of the relationship between the father and the son. At that time, Ba had told Gandhi that she would have been happier without children because no matter the sacrifices she made for him, she and her children only got discrimination in return.

Isn’t Dalmia demonising Gandhi at a time when attempts are being made at that anyway? “I have not demonised Gandhi. I have, in fact, humanised him. I have looked at Gandhi from the point of his wife.”

Tushar understands Dalmia’s point. “She told me that she wrote this book from the point of view of her mother, who was left by her father in her youth. She writes from a modern woman’s perspective.” Tushar too feels Ba suffered a lot, but he doesn’t see her as a victim. “She was a woman who had the strength to sacrifice,” he says.

“We must understand that Gandhiji was an obsessed man, constantly finding fault with himself and trying to correct it instead of blaming others or circumstances. He even took the blame for Partition on himself, as much as he took the moral responsibility for the killings of Hindus and Muslims that happened post-Partition. Anyone living with such a man has to take a step back,” he says.

After Ba’s death in 1944, Bapu became so lonely he has even accounted that he hallucinated she had come to meet him. This was the kind of love they shared. This is what Hasan shows in his play too.