Let’s focus on providing affordable food to all

The new Act will facilitate hoarding in the guise of processing and exports and will certainly lead to an increase in food prices, adversely affecting consumer welfare. Though there is a provision for storing only up to the capacity of processing or demand for exports, it will be difficult to check whether the processors have obtained permission for excess capacity or not. In a weak monitoring system, how will it be possible to ascertain the total export demand at the individual exporter level 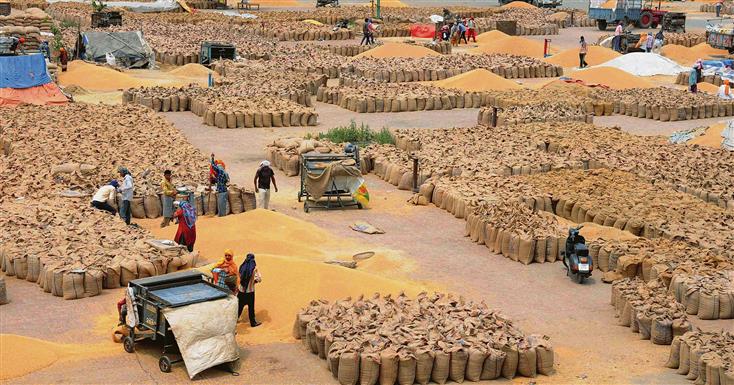 THE three farm laws enacted last year are witnessing an intense debate on their perceived impact on the Indian farmer. However, the implications for the average Indian consumer as well as for society on the whole have escaped attention.

The Essential Commodities Act, 1955, is aimed at regulating essential commodities such as foodstuffs to discourage hoarding and black marketeering so that an average consumer does not suffer from malpractices in the markets. The law empowers the Central Government to “control production, supply, distribution, exports and stock limits of all the essential commodities, including foodstuffs”. With the Essential Commodities (Amendment) Act of 2020, the Act of 1955 stands amended with the provision that “the supply of such foodstuffs, including cereals, pulses, potato, onions, edible oilseeds and oils, as the Central Government may, by notification in the Official Gazette, specify, may be regulated only under extraordinary circumstances which may include war, famine, extraordinary price rise and natural calamity of grave nature.” The reason being given for excluding the foodstuffs from the essential commodities’ list is that the country has become a surplus producer in these commodities. Earlier, a high-powered committee recommended the removal of restrictions on stocks, movement and price control of these commodities to attract private investment in marketing and infrastructure. The 2020 Act mentions that excessive regulations lead to lower prices for the farmer-producer, discourage exports and restrict investments in cold storage, warehousing and processing. With the new Act, the stock limit can only be introduced if the prices of horticultural produce double and those of non-perishable foodstuffs increase by half of the prevailing prices during the past one year or the average retail price of the past five years, whichever is minimum. In addition, the limits cannot be imposed on processors or value chain participants of any agricultural produce if their stocks do not exceed their installed capacities of processing or total export demand.

The arguments in favour of the 2020 Act are that the specification of the price trigger will remove the arbitrariness of action on stocking and encourage private investments. Increased investments in agricultural value chains, including cold chains, will reduce post-harvest losses and encourage exports within and outside the country. Increased storage will also check a glut in the market during the peak production season which harms the farmers’ interests. Finally, the farmers will get better prices for their produce and their income will increase. Further, it would not be out of place to add that similar arguments about private investments were given when the APMC Act was abolished in Bihar in 2006. But there is no evidence that private investment increased in Bihar in the post-2006 period.

While the intention to raise farmers’ income through better prices and linkages with the upgraded value chains is laudable, it is surprising that the basic purpose of regulating essential commodities — to ensure that the domestic consumer does not end up paying exorbitantly higher prices — has largely been ignored. As often witnessed in the past, the hoarders usually pile up their stocks like onion and potato and start manipulating the prices, putting greater burden on the average consumer. There are instances of such events having even led to the fall of governments. During a glut, the powerful traders tend to suppress the prices as much as possible as the farmer is compelled to sell his produce due to urgent monetary needs. In such a situation, it appears that neither the farmer nor the consumer will benefit.

Although cold chains, processing facilities and value chains for exports will benefit farmers, the intermediaries are likely to extract higher benefits from their investments as they have relatively much higher market power than numerous small holders with little or no bargaining power. If there is any doubt, one can analyse the profit margin of the farmer versus others in the processed food already in the market.

The new Act will facilitate hoarding in the guise of processing and exports and will certainly lead to an increase in food prices, adversely affecting consumer welfare. Though there is a provision for storing only up to the capacity of processing or demand for exports, it will be difficult to check whether the processors have obtained permission for excess capacity or not. Further, in a weak monitoring system, how will it be possible to ascertain the total export demand at the individual exporter level? The hoarders may exploit weaknesses of such capacity assessment, encourage corruption/maladministration and may harm the consumers considerably. The option of introducing regulation only when prices rise by 50 per cent or 100 per cent may help manipulation of market prices so that there is a regular increase in prices though it remains below such a limit to check the introduction of regulation.

India continues to be ranked poorly on the Global Hunger Index (No. 94 out of 107 countries in 2020). Despite India being termed food-surplus, almost 19 crore Indians go to bed on an empty stomach. Evidently, our performance in feeding our countrymen is not very encouraging. How then do the removal of such regulations and the likelihood of a price rise of the foodstuffs in future serve India’s poor consumer?

There is a need to frame inclusive policies which can ensure access to food even to the poorest in the country. The consumers now stand more vulnerable to the vagaries of the markets, which are far from being perfect and efficient. The big traders and hoarders have much larger market power than the consumers to manipulate the market forces to usurp the consumer surplus.

Whose interests should be on top of the agenda of the government? A quick and correct answer to this question is ‘the nation’. The nation means people whose first need is food. The poorer section of our nation distinctly outnumbers the other sections. Should we focus on providing food at reasonable prices to all and particularly to those who earn a few rupees a day or formulate policies promoting the growth of those predatory corporate giants which add crores to their wealth each day thinking that it will be in the interest of our economy? We need to ponder over this matter and revisit the new Act keeping the interests of the consumer foremost on our agenda.