Lightning strikes by IAF's 20 Squadron, one of most highly-decorated units in 1971 War 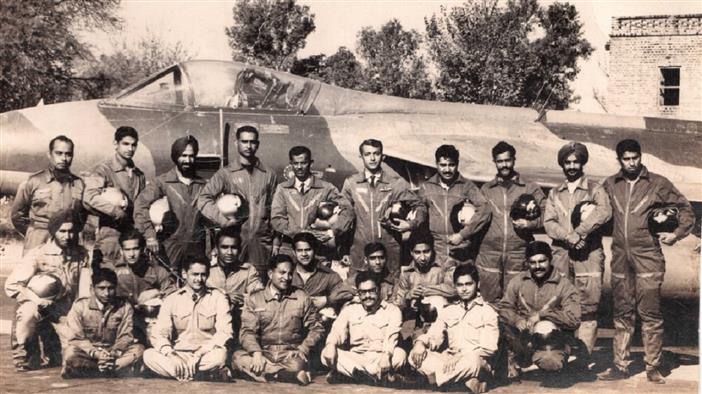 A group photograph of 20 Squadron after the 1971 war. The MVC recipients, Wg Cdr Cecil Parker is standing fifth from left and Sqn Ldr Ravi Bhardwaj fourth from left. Vir Chakra awardees Lt Arun Prakash of the Indian Navy, who later became the Chief of Naval Staff, is in the middle row (second from left) and Flying Officer BC Karambaya is on the extreme right in the standing row. Photo courtesy: AVM Cecil Parker

By the time of the 1971 Bangladesh liberation war, 20 Squadron of the Indian Air Force, the Lightnings, was well prepared. Its CO, then Wing Commander Cecil Parker, had been in the role for over two years. He had previously founded the Operational Training Unit of the IAF, on the same Hawker Hunter aircraft that the Lightnings were now operating, and had been Lightning Flight Commander. With over a thousand hours, he was one of the most experienced IAF Hunter pilots of the time.

The squadron also had a solid Flight Commander in Squadron Leader Jal Mistry. In addition, as part of the strengthening of all units in preparation for the war, they had an experienced supernumerary, then Squadron Leader Ravi Bhardwaj, on attachment. As it happens, he was a coursemate of Sqn Ldr Mistry, had himself been Flight Commander of the Lightnings earlier, and had served under Wg Cdr Parker in the OTU as well.

Other personnel had been rigorously trained and exercised, and knew what was expected of them. Everyone knew war was coming; the Lightnings knew their targets, and had prepped carefully for each one.

So, when the shooting started, with the attempted Pakistani pre-emptive strike on the evening of December 3, the squadron was as ready as could be. There was just one tiny snag — most of the aircraft and pilots weren’t at their base that evening.

For some time previously, in the full expectation that war was imminent, IAF squadrons at forward locations intermittently withdrew their aircraft to rear bases. On the evening of the Pakistani strike, 20 Squadron’s aircraft and personnel were scattered between Ambala and Hindon, their previous base.

They would start flying into Pathankot early next morning. But the squadron’s orders for the next day’s counter-strikes arrived overnight. And the first one had a Time Over Target of sunrise Pakistan time. Which meant the mission would have to take off well before dawn in India. Their own aircraft would not be back in time.

Undaunted, the squadron launched its first two missions before dawn, using aircraft borrowed from the co-located 27 Squadron. Wg Cdr Parker, “exercising his prerogative”, as the squadron diary noted, led the squadron’s first foray into enemy territory, with then Flight Lieutenant Charan Singh “Chhani” Dhillon as his No. 2.

That first mission, target Peshawar, was one of the longest-range strikes undertaken by single-engine, single-seater aircraft during India-Pakistan wars. During the 1965 war, the Pakistan Air Force had treated Peshawar as their safe harbour, and withdrawn their most valued assets there during the night.

That 1971 morning, at high speed and low level, Parker and Dhillon hooked around Peshawar, so as to approach unexpectedly from the West rather than the East. They executed two passes, hitting a Sabre being refuelled from a bowser, and a fuel installation, before exiting. They were pursued by three or four Pakistani Sabres, who over a long chase were able to gradually catch up. Because of fuel and aircraft configuration, the Hunters could not engage in combat, and had to simply jettison auxiliary tanks and fly hell for leather. The Sabres were able to close in and fire, and managed several hits on the Hunters. Wg Cdr Parker called for a tactical break, timed so his No. 2 would be breaking in the direction of India. One Sabre, unable to stay with Parker’s tight turn (his g-counter showed he had pulled 10g), overshot. Wg Cdr Parker emptied his remaining ammunition on that Sabre, catching it squarely in his sights as confirmed by his gun-camera films. Unfortunately, he did not have enough shells left to bring the Sabre down, having nearly emptied his cannons over Peshawar itself. By then, he was almost at the border, and the Pakistanis gave up the chase.

Parker and Dhillon approached Pathankot, eking out the last few miles literally on fumes. Wg Cdr Parker was cleared for a straight-in approach, and his engine flamed-out immediately on landing. Flt Lt Dhillon’s engine actually flamed-out while still in the air, but skilled airmanship brought him and his Hunter safely down to a dead-stick landing. Both aircraft were back from the squadron’s first mission with tanks completely dry, and peppered with bullet holes.

The squadron settled, if that can be said of wartime, to a stern but matter-of-factly executed routine of about 20 sorties a day. Most of its pilots flew at least one sortie into enemy territory each day. They endured two losses, one on that first day itself, the young and always smiling Flying Officer KP Muralidharan. The other was the following day, their trusted Flight Commander, Squadron Leader Jal Mistry, lost to missile-armed PAF Mirages, while (successfully) attacking the ferociously-defended PAF Operations Centre at Sakesar.

The squadron continued its assigned counter-air role over the next few days, striking enemy airfields. One of their targets was Chaklala, the airfield for Rawalpindi, where they destroyed a few light transport aircraft — one of which, as it turned out, was the personal aircraft of Brigadier-General Charles “Chuck” Yeager, the USAF Second World War ace and jet-era test pilot, who was at this time a military adviser to the US Ambassador to Pakistan. Yeager’s reaction was said to be of fury, but has been rendered into laugh-out-loud funny accounts by both a US diplomat serving alongside him in Pakistan, and by the Lightning pilot responsible for that demonstration of accurate gunnery under fire.

Another memorable counter-air strike, led by Sqn Ldr Bhardwaj, was on Murid, a new airbase in Pakistani Punjab, where five enemy aircraft were destroyed in a single strike. Bhardwaj and his formation actually only claimed two destroyed; the full toll they had exacted was confirmed in Pakistani accounts later.

Yet another spectacular strike was on an economic target: the Attock oil refinery, one of only two in Pakistan at the time. The squadron diary describes, and numerous photos confirm, “towering sheets of orange flames, and billows of oily black smoke”.

After five days of non-stop raids mainly on enemy airfields, the Lightnings turned to a different task: close air support (CAS) for the Army at Chhamb. As is well known, the Chhamb sector, where geography favours Pakistan and where the Pakistan army concentrated skilfully in twice our strength, was where the Indian Army was hardest pressed during the war. CAS was needed, and the Lightnings, based close by, flew nearly a dozen sorties each day, in support of troops on the ground, for the next few days.

One morning during that period, Sqn Ldr Bhardwaj was leading a CAS pair orbiting over Munnawar Tawi, hampered by the early morning mist common in the North Indian winter, when his wingman, Flying Officer BC “Lofty” Karambaya, spotted two Pakistani Sabres firing at him. Fg Off Karambaya has shared a detailed account. He describes using the Hunter’s flaps to turn tighter than his pursuer, while calmly remaining in continuous R/T contact with his leader even as a few shells hit his Hunter. When Bhardwaj confirmed visual contact, and not before, Karambaya broke East. The Sabre tried to follow, but Sqn Ldr Bhardwaj had caught up, and opened fire. The Sabre exploded in an orange fireball, giving Sqn Ldr Bhardwaj an air-to-air kill, still an iconic token of air superiority.

In talking to former Lightnings years later, their collective pride in the squadron’s successes is clear. Air Vice Marshal (as he later became) Parker is always quick to turn the conversation to the officers and men he commanded, and to highlight the squadron’s wider accomplishments.

Among the Lightnings that year was a young Indian Navy aviator, then Lieutenant Arun Prakash, doing the regular exchange programme with the IAF that many IN aviators do. He went on to significant career accomplishments himself, rising eventually to Chief of Naval Staff. In later years, both AVM Parker and Admiral Prakash had occasion to speak in public on leadership and war. Interestingly, both invariably paid tribute to the other. The respect is clearly mutual, and has lasted these 50 years.

At the end of the war, Parker and Bhardwaj (who later became Air Marshal) both received Maha Vir Chakras. AVM Parker will be the first to say that his decoration is an honour not only to him personally, but to the team he led. The 28 officers and 300-odd other personnel under his command bore themselves to become one of the most highly-decorated units in the armed forces. Apart from the two MVCs, the squadron received five VrCs (including Sqn Ldr Mistry, Lt Prakash and Fg Off Karambaya) and numerous other honours.

— The writer is the author of ‘Ganesha’s Flyboys’ and ‘The Forgotten Few’. His third book, ‘December in Dacca’, is expected later this year