Ambitious four-laning of Kiratpur-Manali NH-21 has made travel a nightmare. All hopes are pinned on 2023 deadline

For the thousands who ventured on the long journey to Kullu-Manali this summer, hundreds cancelled their plans too. The pull of the majestic views and the Atal Tunnel notwithstanding, what kept them away was the nightmarish experiences of several tourists, who spent anywhere between a backbreaking 10 and 12 hours in traffic jams on the 232-km Kiratpur-Manali highway that otherwise takes six hours.

Faced with severe connectivity issues in the near absence of air and rail services, the ongoing work on the four-laning project in Himachal Pradesh has added to the woes of not just daily commuters, but also the tourists thronging the hill stations since April this year. Though Kullu-Manali witnessed a huge tourist influx after two years of an almost complete washout due to Covid-19, poor connectivity proved to be and remains the biggest bane of the Valley of Gods.

The National Highway Authority of India (NHAI) is executing the Kiratpur-Manali four-laning project, connecting Chandigarh to Manali (National Highway-21). Work on the project between Kiratpur, the border between Himachal Pradesh and Punjab, and Manali has been divided into four sections. The Rs 6,000-crore project has already missed its 2021 deadline, and the NHAI now hopes to complete it by March 2023. Once ready, the travel time will be reduced by almost three hours on the Kiratpur-Manali highway. 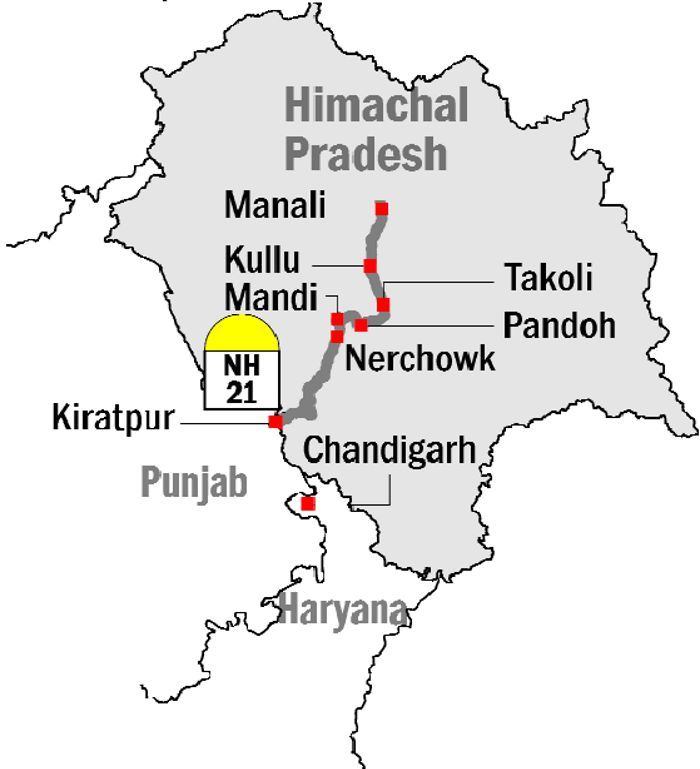 While there has been considerable progress on the road construction between Kullu and Manali, the 26-km stretch between Mandi and Pandoh is proving to be a tough task. This is the road taken by majority of tourists coming from Punjab, Haryana, Chandigarh and Delhi. In May, 45,000 outside vehicles entered Manali. This number shot up to 71,800 in June, generating an income of Rs 2.55 crore as green tax for two months for the local municipal committee.

To ensure that work is carried out while ensuring the flow of traffic, the NHAI has been stopping vehicles at regular intervals, leading to long queues within no time. During the peak tourist season in May-June, these queues would be kilometres long. Adding to commuters’ woes are the frequent landslides that this area is prone to, causing traffic disruption.

Mandi resident Ashish Sharma, who works in the private sector in Kullu and often commutes on this stretch, says that despite the distance not being much, the journey is agonising. “Besides being stuck in traffic jams for hours together, the road stretch between Mandi and Aut is very risky, especially during the rainy season when there are major landslides,” he says. Sharma adds that there are so many regular commuters like him who are eagerly awaiting the completion of the four-laning project.

“Severely hit by the pandemic, the beleaguered tourism industry is still ailing, with many hotels in Manali being put up for sale. On top of that, poor connectivity remains the biggest impediment to tourism promotion as flights are erratic and ticket prices exorbitant; road travel, the only option, is too arduous,” says Mukesh Thakur, president of the Manali Hoteliers Association.

He says tourists complain of poor road conditions, damage to vehicles and traffic snarls. However, he admits that once the highway is ready, it will be a smooth drive.

Budhi Prakash Thakur, a hotelier, says the four-laning project is progressing at a snail’s pace, adversely impacting tourist arrivals. “People who have a harrowing time due to constant traffic jams swear they’ll never return. This has resulted in a decline in tourist arrivals,” he adds.

Hoteliers say that with the airfare hovering around Rs 20,000 for the Delhi-Kullu one-way trip, most people prefer road travel. The tourism industry can benefit only by improving road connectivity and making air flights economical by covering it under subsidised schemes like Udaan, they insist.

Despite Manali being voted as the most-favoured hill station among Indian travellers as per a survey by Oyo, not many efforts have been made to spruce up related infrastructure in the state. MakeMyTrip, a global travel technology company, has indicated an increase of 150 per cent for homestay preferences in areas like Kasol near Kullu. However, the strengthening of tourism infrastructure and connectivity has remained low on the priority of successive regimes.

The failure of the Public Works Department (PWD) to widen and improve the condition of the Mandi-Kullu road, via Kataula, is another reason why the main road is choked. The 51-km stretch that joins the Chandigarh-Manali highway at Bajaura in Kullu district is unable to take a heavy volume of traffic as it is very narrow, steep and winding. Had the PWD taken the trouble of widening the narrow parts on this road, it would have taken a lot of load off the main highway and eased traffic congestion. Despite the persistent demand of the hoteliers to widen this route, little attention has been paid. A 28-km stretch between Mandi and Tihri was widened some years back, but the remaining 23-km road towards Bajaura is still single-lane. Hoteliers say the state government’s commitment towards promoting tourism exists only on paper.

“We hope to complete the project by March 2023. The stretch between Aut-Pandoh-Mandi is proving to be the most difficult owing to geological factors,” says Varun Chari, project director, Kiratpur-Manali Project (NHAI). He admits that there has been escalation from the initial estimated cost of Rs 1,818 crore to Rs 6,000 crore due to factors such as difficult geology, landslide prone area and slow pace of work on account of financial constraints initally.

The vulnerability of the entire district of Kullu to natural disasters is another cause of concern. Every monsoon, there are flash floods due to cloudbursts and major landslides triggered by heavy rains. This results in heavy damage to public property, including roads, which remain the lifeline in most parts of the state.

Even during this monsoon, Kullu-Manali, besides Kinnaur, suffered maximum damage due to rains and flash floods caused by cloudburst or heavy downpour. “Yeh project toh vikas ke naam pe vinaash hai (this project is destruction in the name of development)” is the common refrain of almost every villager of Thalout, Panarsa, Aut, Nagwain, Takoli, Jhiri, Jia and Dadour, which have been worst affected by the project.

— With inputs from Dipender Manta