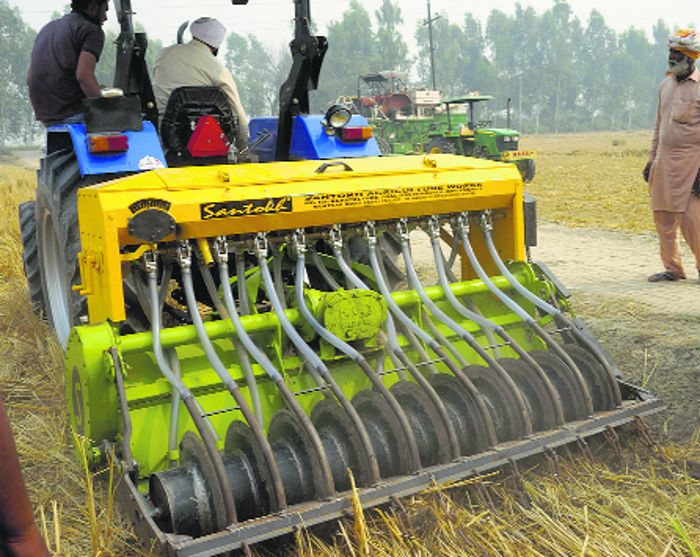 This machine, a cross between a rotavator and a happy seeder, chops paddy straw and sows wheat.

FOR years, farmers of Punjab have been setting paddy stubble afire to prepare their fields for sowing the wheat crop. They agree that the plumes of smoke that arise from their fields are harmful to the environment as well as human health. They admit that restricted visibility caused by the smog leads to accidents. “But what can we do? This is the way things are and always have been,” is the common rant one hears from farmers.

No wonder the efforts made by the state Agriculture Department to manage stubble scientifically — in situ and ex situ — have made little progress. It’s not that the government’s attempts are half-hearted, especially under the gaze of the National Green Tribunal and the Central Pollution Control Board. In the past three years, over 50,000 machines such as happy seeders, super seeders, paddy choppers/shredders, mulchers, reversible MB ploughs, super straw management systems, rotary slashers etc., meant for stubble management, have been distributed. This year, 23,500 more machines are to be provided, of which 17,000 have already been given. For ex situ stubble management, about 220 balers have been provided on subsidy. Some industrial projects using paddy straw as biofuel have been set up. Punjab has also started field trials of the Pusa bio decomposer, along with other similar equipment, though their commercial use will take time.

The menace persists in Punjab as political will to stop it is lacking. After all, the farming community is a major vote bank. As a result, stubble burning in the state is somewhat controlled only when the elections are away. The number of cases registered against farmers for burning stubble is a minuscule fraction of the incidents of farm fires reported by the Punjab Remote Sensing Centre. Against an environmental compensation of Rs 2.42 crore in 9,167 cases, only Rs 5.4 lakh has been recovered.

This year, the number of stubble burning incidents in the ongoing season has gone up by 65 per cent over last year. The farmers are upset this time over an ordinance to set up a commission to monitor the air quality in the National Capital Region. “The stubble burning incidents were lower than those last year till October 28. The incidents increased after the ordinance was signed by the President, with the provision for heavy fines and jail term for guilty farmers,” says Punjab’s Agriculture Commissioner BS Sidhu. 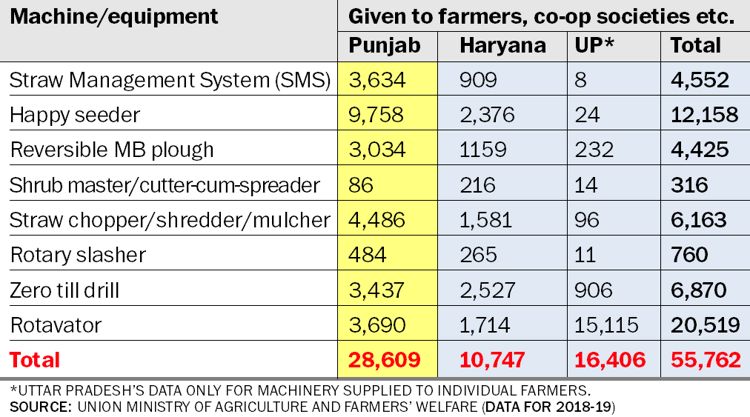 Also, farmers are up in arms over the Centre’s farm laws. Randeep Singh, a Sangrur-based agriculture activist, says though farmers have bought or rented machines to manage stubble, the anger against the government forced them to burn stubble this year.

Last year, the Supreme Court had said that farmers be given compensation for scientific management of paddy stubble at the rate of Rs 2,500 per acre. “Most of the farmers did not get this compensation as it was stopped abruptly. Thus, they got demotivated and resumed stubble burning,” says Talwinder Singh Gaggon, state vice-president of BKU (Qadian).