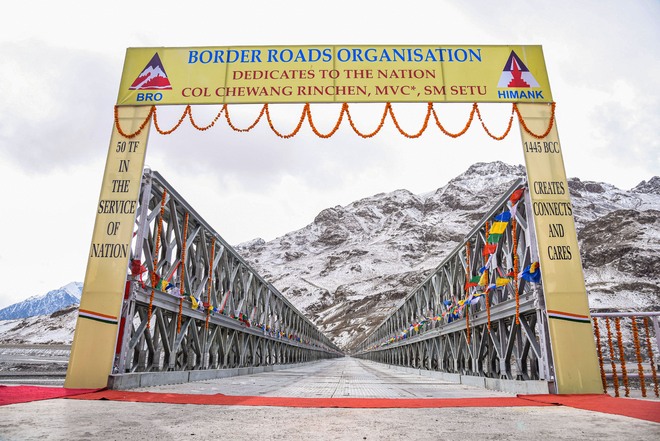 A view of the Colonel Chhewang Rinchen Bridge on Shyok river in Ladakh, which is named after the two-time MVC recipient. PTI

The strategically important 400-metre all-weather bridge in Eastern Ladakh not only connects Darbuk with Daulat Beg Oldi (DBO), just 45 km from the LAC with China, but also provides a vital link for the people of Ladakh living in the interior areas with mainland India. It is most aptly christened Colonel Chhewang Rinchen Setu after the ‘Lion of Ladakh’, who fought all the four wars during his Army career — 1947-48, 1965 and 1971 against Pakistan and 1962 against China — and was decorated in all.

Chhewang Rinchen was born on November 11, 1930, at Sumur village in Nubra valley, north of Leh. In Nubra, his great grandfather was bestowed with the title ‘Lion of Ladakh’ for his bravery and his mother was revered as ‘Mother of Nubra’ for her compassion. Very early in his life, Chhewang inherited both the attributes; bravery from his great grandfather and compassion from his mother.

The invasion of Kashmir by Pakistan started in October 1947, placing Ladakh in grave jeopardy from the Gilgit-Baltistan raiders from the north. Since Leh and areas east of it were far from mainland Kashmir, news reached rather late. Chhewang was then in 10th standard studying at Leh. 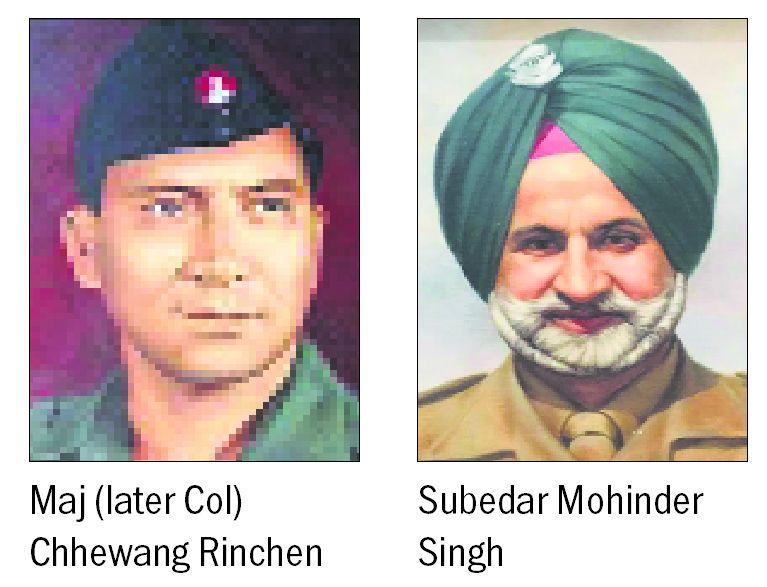 While he was waiting for his results, he learnt that Pakistani raiders had reached Zojila and were heading towards Leh. He also learnt that another axis for the raiders to reach Leh was via Gilgit-Skardu-Turtuk through Nubra valley, his homeland. It was June 1948.

Chhewang, then about 17-and-a-half, without informing anybody, trekked back to his village with a mission: not to allow the enemy to encroach upon Nubra. During his frantic move from village to village for 10 days, he gathered 28 volunteers, named them ‘Nubra Guards’ and reported to the nearest Army post at Turtuk to join the fight to stop the intruders from entering the valley. After about 10 days of basic training in field craft and handling weapons, Chhewang, along with his band of Nubra Guards, formally joined 7th J&K Militia as a soldier on July 25, 1948.

The cardinal attributes of Sepoy Rinchen — resourcefulness, leadership qualities and loyalty to his paltan — did not go unnoticed; just about a month later, he was promoted to the rank of Jemadar.

In September 1948, Jemadar Chhewang Rinchen of 7th J&K Militia, while negotiating a height of 17,000 feet under heavy snow and extremely inclement weather, led the charge by the 28 Nunus (Ladakhi term for the young ones) onto the intruders and recaptured the tactically important Lama House from the enemy in Nubra sector.

In another daring action, having marched for three days through heavy snow blizzards, he launched a fierce attack on the most dominating feature near Biangdangdo and captured it. This action was immediately followed by the capture of Tukkar Hill, the last enemy bastion in Leh tehsil, which involved crossing of a snow-clad mountain over 21,000 feet. During the last action, half of his platoon was suffering from frostbite but under his inspiring leadership and following his example of personal bravery, his men accomplished the seemingly impossible feat.

For his daring act of taking on the enemy far superior in number, and recapturing the lost ground, Jemadar Chhewang Rinchen was awarded the Maha Vir Chakra, becoming the youngest to get the second highest gallantry decoration.

On June 1, 1959, Rinchen, MVC, now a Subedar, was granted Temporary Commission and was posted to 14 J&K Militia as Second Lieutenant. In the 1962 India-China conflict, he was awarded the Sena Medal for leading a rescue patrol near Chandni Post in DBO.

During the war with Pakistan in 1965, Chhewang Rinchen, now a Captain, was Mentioned in Dispatches for his commendable role in defending the territory in Nubra valley which he had recaptured in 1948.

In 1971, now a Major, he led a company-sized composite group called ‘Dhal Force’ against a strongly held Pakistani post on Point 18402. After a bitter fight, the force successfully recaptured the post (one of the highest captured in Ladakh) and also the tactically vital and strongly held Chalunka complex of the enemy. Seeing the enemy in hasty retreat, he daringly exploited the success and captured almost 800 sq km of Turtuk area which was in illegal occupation of the Pakistan army.

For this daring operation against all possible odds, he was awarded the Bar to the Maha Vir Chakra (the award won second time). The battle account reads:

“Major Chhewang Rinchen of Ladakh Scouts was the commander of the force assigned the task of capturing the tactically vital and strongly held Chalunka complex of the enemy in Partapur sector north of Leh. The complex consisted of nine strongly held positions, each fortified with mine and wire obstacles. Major Rinchen planned and executed the operation with professional competence and great zeal. Under most adverse weather conditions, Major Rinchen led his men displaying aggressive spirit and cool courage, moving from bunker to bunker, exhorting and encouraging his men to destroy the enemy, making the operation a complete success.”

Chhewang Rinchen retired from active service in 1980. However, on popular recommendations, he rejoined the Army in 1983 in the rank of Lieutenant Colonel. Before his final retirement in 1985, he was conferred the honorary rank of Colonel.

Not just the 400-metre Darbuk-DBO Bridge in Eastern Ladakh, another strategically important post in Siachen Glacier is named Rinchen Post.

Chhewang Rinchen is not just the youngest Maha Vir Chakra awardee, the award he won twice; he is the only awardee in the Indian Army to have been decorated during all the wars he fought while in service.

In 1971, Uday, now a Colonel, was given the command of three Ladakh Scouts infantry companies and a section each of mortars and machine guns to recapture Indian territory from Chalunka to Turtuk north of Leh, held strongly by a PoK infantry battalion in Nubra.

The task involved movement on manpack and animal transport, mostly by night, at sub-zero temperature at an altitude up to 18,000 feet and above. It is due to the sheer grit and determination of Colonel Uday and his Gorkhas fighting against all possible odds that today, not just Tyakshi, Turtuk and Chalunka, but also around 800 sq km territory is back where it belonged — India.

For his conspicuous gallantry, outstanding leadership and cool courage in the face of the enemy superior in number throughout this 10-day successful operation, Col Uday Singh was awarded the Maha Vir Chakra.

Subedar Mohinder Singh, son of Sardar Bodh Singh, hailed from Sham Nagar village in Amritsar district. During the 1971 war, while commanding No. 9 platoon of ‘C’ Company, a Sikh company of 18 Punjab, in the Kargil sector, he went way beyond the call of duty and undeterred led his platoon uphill from the front for the capture of a height that had defied capture by the Indian Army’s earlier attempts twice over.

After reaching the assaulting distance, he gave the cry ‘Bole So Nihal’ and before the mighty Sikhs of No. 9 platoon of 18 Punjab followed with the iconic words ‘Sat Sri Akal’, they were already bayoneting one enemy after the other just short of the targeted height, with Subedar Mohinder in the lead. After half an hour of hand-to-hand fight, the highest point, that overlooked the Srinagar-Leh highway, was back with the Indian Army.

After the ceasefire on September 23, 1965, overlooking the agreements, the Pakistan army captured certain key Indian localities in the Poonch and Kargil sectors. Both needed to be recaptured, the ones in the Kargil sector on priority since some of these overlooked the Srinagar-Leh highway from where, with observed artillery fire, the enemy could interdict the transport carrying supplies for the Indian Army operating right up to the LAC in Eastern Ladakh.

For his bold planning, and quite often, being in the forefront to ensure its execution, Brig Mohinder Lal Whig, ex Gorkha Rifles, son of Sardari Lal Whig of the reputed Whig family of Amritsar, while commanding 121 Independent Infantry Brigade Group, was also awarded the Maha Vir Chakra during the 1971 India-Pakistan war.