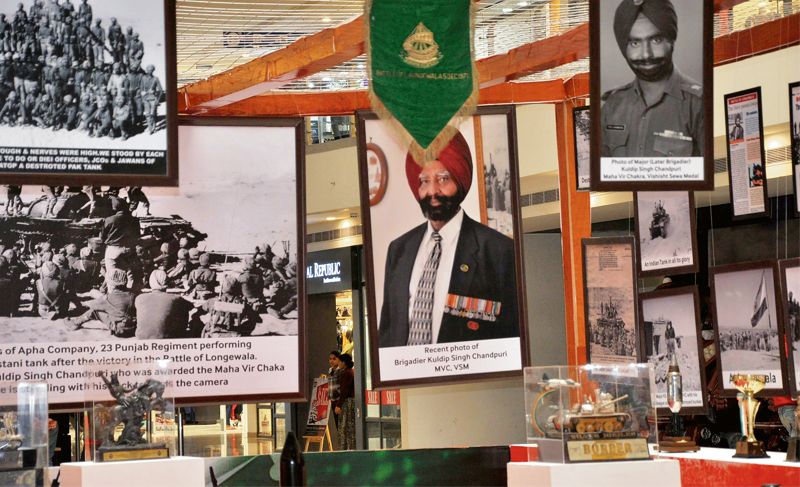 THE genes of valour were tempered in World War I, reinforced during World War II and decorated in the third generation at Longewala.

THE genes of valour were tempered in World War I, reinforced during World War II and decorated in the third generation at Longewala. Karam Singh, the grandfather, served with XXXVI Sikhs (Saragarhi Battalion) in Mesopotamia in WW I, followed by Wattan Singh, who served in the St John’s Ambulance Brigade during WW II.

Karam Singh decided to move the family from rain-dependent farming to canal-irrigated fertile lands that he had invested in. In early 1938, the family left Chandpur Rorki village (7 km from Garhshankar) for Chak 161/9L in Montgomery district (now in Pakistan).

It was here that Kuldip Singh was born on November 22, 1940; his two sisters followed. Things were beginning to look up, but providence had other plans. A young seven-year-old saw the horrors of Partition, till he, his mother and sisters were evacuated by the Army to Amritsar, where Col Assa Singh, a family friend, provided shelter. The male members had to trudge back in different groups, avoiding murdering marauders. The family reunited at Chandpur Rorki.

Football had caught young Kuldip’s fancy. After passing high school from Saroya, football took him to SGS Khalsa College, Mahilpur, which was considered a nursery of the game, and then to Government College, Hoshiarpur.

While still undergoing graduation, he became an under officer in NCC, participating in the Republic Day Parade of 1962. Later the same year, the Chinese invasion took place. About this time, Punjab Chief Minister Partap Singh Kairon visited the college, seeking volunteers to fight the nation’s enemies.

Soon, the India-Pakistan 1965 war took place and 3 Punjab was defending the Beas bridge as the enemy’s armour thrust threatened to cut off a major chunk of Punjab. Being a reserve battalion, 3 Punjab saw frequent changes in tasks and locations, all adding to the experience of Lt Chandpuri. The same year, the battalion moved for its UN Mission assignment in Gaza for a year.

In May 1971, Capt Chandpuri was posted to 23 Punjab, then located at Bikaner, with an operational role in Jaisalmer sector. Maj Chandpuri, after his promotion, was assigned the command of Alfa (Sikh) Company. Punjab battalions have a mix of two Sikh and two Dogra companies. Soon, Maj Chandpuri was detailed for a month-long familiarisation with the operational area, which was to pay great dividends in the war that was to follow.

Anticipating the war, 23 Punjab had occupied its battle positions. Major Chandpuri’s Alfa Company was defending Longewala, the sweet water position, while the remaining battalion was occupying a defended area at Sadewala. The remaining brigade was at Tanot. The Longewala position was reasonably well fortified with anti-tank mines laid by the Pioneer section, largely towards the south-west. The only wire fence that circumvented the position was basically laid to keep out the wild camels that came sniffing for water. This wire was to prove the undoing of the attackers.

A section each of 81 mm mortars, 7.62 MMG and 106 mm RCLs were in location. Having patrolled the areas around and fortified the trenches, the Punjabis were confident of themselves. Intelligence inputs pointed to a Pakistani attack, and sure enough on December 3, air strikes on all Indian airfields announced the start of the war on the western front. On the night of December 4/5, Lt Dharamvir, the Company Officer with Maj Chandpuri, reported large columns of tanks and infantry moving towards Longewala. Maj Chandpuri collected his men, spoke to them about their rich martial traditions and urged them to hold fast at all costs. He, however, said that anyone who feared death was free to leave, but he would fight to the very last. “Loon de mull chakaon da wela aa gaya sathiyo (time has come to repay a national debt),” he said.

A series of ‘jaikaras’ of “Jo Bole So Nihal, Sat Sri Akal” reverberated as Maj Chandpuri realised that his motivational tirade had hit home. His request for reinforcements and tanks was still pending with his CO when the enemy tanks closed in on the wire and gradually spread out to surround the post. Exchange of small arms fire had commenced, with which all avenues of reinforcement were now blocked. Maj Chandpuri expected a tank assault on his weak defence anytime. Fortunately, that did not happen. The enemy tanks taking the cattle fence to be a minefield halted. The infantry started shooting at the Punjabi defences. The wire had successfully separated the infantry from its tank support. The battle was now between an infantry battalion and the resolute Alfa Company of 23 Punjab.

The 106 RCL gun of Maj Chandpuri got into action, the first round scoring a hit against a T-59 tank that had closed in, which soon burst into flames. The second RCL gun knocked out an enemy jeep. Seeing the result, the MMG and 81 mm mortars opened fire, imposing further caution on the enemy infantry accompanying the tanks. At this juncture, Sepoy Bishan Das of Pioneer Platoon on orders began to place anti-tank mines on the likely routes of the tanks.

Maj Chandpuri, in order to motivate his men, moved from trench to trench under enemy fire. Tank-tracer rounds were guiding every fire and making it more accurate, men were getting injured but seeing their Company Commander move under fire kept the company motivated.

As day broke, the IAF Hunter aircraft took to air targeting every tank in the open. Initially, the aircraft avoided engaging tanks very close to the Company locality thinking them to be our own. But once the ground reality was communicated, every tank was shot.

Early on December 5, Lt Dharamvir’s patrol had reinforced the company, along with three AMX-13 tanks of the Independent Squadron.

Longewala Company had held the better part of the enemy brigade and a tank regiment with sheer will power. The Indian Air Force then went into a happy shooting mode, making Longewala area the graveyard of the enemy tanks; 37 were destroyed, breaking the back of the Pakistani offensive to capture Jaisalmer.

For his conspicuous gallantry and inspiring leadership, Maj KS Chandpuri was awarded the Maha Vir Chakra.

Kuldeep Singh Chandpuri, MVC, rose to the rank of Brigadier and was also Commandant of Punjab Regimental Centre. An international referee in athletics, he breathed his last on November 17, 2018 at Chandigarh, leaving behind a rich legacy.

JP Dutta’s 1996 movie “Border” with Sunny Deol portraying Chandpuri gave the battle of Longewala the kind of popularity that few Indian battles have got.

Even more, Chandpuri waded into controversy after then Jaisalmer Air Base commander MS Bawa (retired as Air Marshal) wrote: “The Pakistani thrust was blunted by air action alone.” Atma Singh, the Army’s air observation pilot operating with the Air Force, too, disparaged the hype around Chandpuri and his company. “It is about taking credit where little is due,” he wrote.

Chandpuri sued for the princely price of Rs1. For him, it was about honour and prestige. He was later urged not to pursue the case vigorously, lest the Army-IAF spat grew uglier. TNS