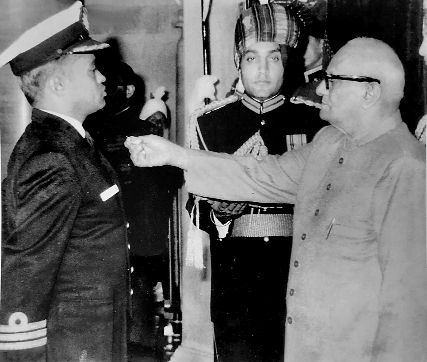 As a student, Chiman Singh Yadav was passionate about swimming and diving in the village pond. In 1961, he accompanied a group of students to watch the Republic Day Parade in Delhi. There he saw for the first time a tableau of a ship, with young men atop attired in immaculate whites performing mock drills on diving from the deck. Fascinated, he needed no counselling on what career to choose.

Son of Rao Nand Kishore Yadav, Chiman was born at Gokalgarh village in Gurgaon district of then undivided Punjab on June 1, 1945. Gokalgarh, incidentally, was one of the villages in the water-starved south-west Haryana called Ahirwal. Some of the villages though had small ponds to fetch water from when the wells went dry.

After matriculation from BS Ahir High School, Rewari, and at just about 16, Chiman joined the Navy as a sailor through the Boys Entry on June 8, 1961. Within seven years, Chiman, as Leading Seaman, was a Clearance Diver Class 2 and underwater bomb disposal specialist at the Naval Diving School, Cochin. He also specialised in the use of limpet mines against enemy warships and submarines.

In 1965, consequent to Pakistan Navy’s unsuccessful raid on Dwarka’s front waters, the Indian Navy wanted to retaliate, and in a big way, but was kept on leash, possibly based on strategic thought to restrict the scope of the war. But six years later, the maritime sword arm of the Indian military could no longer be kept on leash. It was widely believed that domination over Arabian Sea could prove to be the game-changer.

During the war with Pakistan in 1971, Operation Trident, the Indian maritime offensive by its Western Naval Command, did change the game by not only blasting the Karachi harbour but also effectively denying West Pakistan war efforts from reaching its eastern half, thereby contributing a lot to the Indian victory during the 14-day war.

Before the outbreak of the war in December, Chiman Singh, now a Leading Seaman (LS-2), not only trained the Mukti Bahini guerrillas in covert sea-borne operations, but himself led many successful operations deep inside East Pakistan waters.

During the 1971 war in the eastern theatre codenamed Operation Cactus Lily, Leading Seaman Chiman Singh, for his conspicuous bravery, unparalleled camaraderie and strong determination in the face of the enemy far superior in number and strength, was awarded the Maha Vir Chakra. The write-up on his gallantry decoration reads:

During Operation Cactus Lily, Leading Seaman Chiman Singh was part of the crew of a small naval vessel entrusted with the task of attacking enemy targets in Khulna, Mongla and Chalna bays in East Pakistan. On December, 11, 1971, while on the mission, the vessel was subjected to enemy air attack while operating off Khulna and was sunk. Leading Seaman Chiman Singh was thrown overboard and seriously injured by shrapnel. Simultaneously, the enemy shore defences opened fire at the survivors in water.

Chiman Singh noticed that the survivors, including an injured officer, were finding it difficult to keep afloat. Despite himself being seriously injured, unmindful of his own safety against enemy automatic fire, he rescued and brought all the survivors to the shore. On reaching the shore, not bothering about his own injured condition, Chiman, to make it possible for his two colleagues from being captured, charged at the enemy, exposing himself to the hostile fire.

Leading Seaman Chiman Singh was eventually overpowered and taken prisoner by the enemy. He, however, was released upon the liberation of Bangladesh. His valiant action behind the enemy lines and in the face of perceivably insurmountable opposition was an embodiment of the Indian Navy’s core values of duty, honour and courage and the diving cadre’s ethos of strong will to succeed and surmount all odds.

For his conspicuous act of bravery and display of utmost courage and determination in the face of the enemy, Leading Seaman Chiman Singh Yadav was awarded the Maha Vir Chakra.

Chiman Singh Yadav was also awarded the ‘Friends of Liberation War’ Honour by the Bangladesh President in 2013. Incidentally, his name figures prominently on the list of invitees by Bangladesh in its yearly celebrations on December 16 every year.

Even after retirement, Chiman Singh continues to live up to his one-liner — once a diver, always a diver, and is a visiting faculty at INS Venduruthy (Naval Diving School, Cochin), a premier training establishment that trains commandos not only from the Indian Tri-Services but also from friendly countries. He is also often invited to attend seminars on updating of the Standard Operating Procedures regarding use of limpet mines.

Petty Officer Chiman Singh Yadav, the living legend, incidentally, is the only sea warrior below Officers rank in the Indian Navy to have been conferred the Maha Vir Chakra, the second highest gallantry decoration.

For the naval operations between December 8 and 11, 1971, against targets on shore at Khulna, Mongla and Chalna bays in south-west East Pakistan, emerged not just one Maha Vir, but three; the other two being Commander Mohan Narayan Rao Samant and Lieutenant Commander Joseph Pius Alfred Noronha.

Samant, the eldest of five children of Subedar Major Narayan Ramchandra Samant, hailed from Parule village in Sindhudurg district along the Konkan coast in Bombay state. He studied in schools wherever his father was posted, mainly at Peshawar, Chaklala and Meerut.

After Intermediate (Science) from Wilson College, Bombay, Samant joined the Royal Indian Navy and was shipped to the United Kingdom for four years’ training at the Royal Navy College, Dartmouth. After his fifth year as a midshipman, Samant returned in 1953 as Sub-Lieutenant (Navigator) along with the last batch of Indian executive officers commissioned in the UK.

During the sea-borne operation deep inside the enemy’s backwaters in the eastern theatre, Samant, now a Commander, headed the task force of three boats armed to the teeth — INS Palash, INS Padma and INS Panvel, which not only neutralised the shore defences but also blasted and set ablaze the oil installation in Khulna, the second biggest in East Pakistan.

For not just commanding but also leading the task force from the front, Commander Samant, for his conspicuous bravery, was awarded the Maha Vir Chakra.

Lieutenant Commander Noronha, Alfred to his friends, son of Joseph C Noronha, a postmaster from Mysore, never wanted to follow in his father’s footsteps, and was a man in search of an elusive destiny. Good at academics, he topped the UPSC entrance and joined Joint Services Wing (present-day National Defence Academy) in 1955 and was commissioned in the Indian Navy in October 1959.

Lieutenant Commander Noronha, commanding INS Panvel, was part of the task force under Commander Samant which attacked Mongla, Chalna and Khulna bays. His ship was subjected to incessant air attacks and enemy fire from shore defences. Lieutenant Commander Noronha, with total disregard to personal safety, handled his ship in the most competent and fearless manner in very restricted waters and effectively engaged enemy shore defences.

22 hours ago
5
Chandigarh In Brief