Improving the productivity of the kharif onion can ensure its availability throughout the year, check the annual spiralling of prices and in turn help in making farmers self-reliant. Farmers mostly grow onions during the rabi season (Jan-April); the kharif onion (August-November) has been planted in a negligible area due to nursery production and storage problems. The kharif crop, if grown by taking precautions and following guidelines, can benefit farmers and consumers.

ONION, one of the most important vegetables, is not only the main ingredient in many dishes but is also used in the cosmetics and pharmaceutical industries. Growing onions on a commercial basis requires significantly less investment and minimal care. In Punjab, it is mostly the rabi crop that is grown by farmers, but improving the productivity of the kharif onion can ensure its availability throughout the year, check the annual spiralling of prices and in turn help in making farmers self-reliant. Farmers need to keep in mind a few crucial things and adopt the bulb-set technique for the kharif crop of onion, opine agriculture experts.

“Three crops — rabi, kharif and late kharif onion — are being cultivated in the south-western parts of the country, whereas two crops (rabi and kharif) are sown in the north-western parts of India throughout the year. Farmers mostly grow the onion during the rabi season (January-April); the kharif onion (August-November) has been planted in a very negligible area so far due to nursery production and storage problems. Punjab Agricultural University (PAU) has recommended its cultivation in both the rabi and kharif seasons to fulfil the requirement throughout the year, says Amandeep Kaur Dhillon, District Extension Scientist (Agronomy), Farm Advisory Service Centre, Sangrur.

“The planting of onions must be done commonly through the nursery during the rabi season, but the kharif crop may be planted both through bulb-sets and nursery. But the period of peak summer and rainfall poses a major bottleneck for successful nursery production. Therefore, PAU’s bulb-set technique works wonders for the successful cultivation of this seasonal crop,” says Buta Singh Romana, Senior Extension Specialist, Farm Advisory Service Centre, Sangrur.

Bed planting of sets improves the bulb size of the kharif onion. Instead of tears, onions bring cheers to Patiala-based Sandeep Singh. “The rabi season is the best one for onions, but the kharif crop, if grown by taking precautions and following guidelines, can benefit not only the farmers but also the consumers,” he says.

Onion production has also augmented the crop diversification programme and favourably impacted the economic conditions of small and marginal farmers. Sukhjinder Singh Sidhu from Burj Kalara village in Jagraon has proved that the approach works. “There was an initial hitch. Growing the kharif onion is a little difficult due to weather and storage issues faced by the farmers in general during this time of the year. I took the plunge with the help of agriculture experts and today I am supplying onions not only to the domestic market but also exporting them,” he says.

Farmers have to be very precise regarding the time of planting of this crop because the prolonged winter can create a bolting problem (when a crop prematurely grows stalks and produces seeds) and high temperature can decrease the bulb size. The soil should be rich in organic matter and well-drained with a weed-free environment.

Plant the 6-8-weeks-old healthy nursery or bulb-sets from mid-August to the first week of September in a well-prepared field. The planting distance should be 15 cm between rows and 7.5 cm from plant to plant for getting good returns. The planting of the kharif onion on the raised beds improves the size of the bulb. 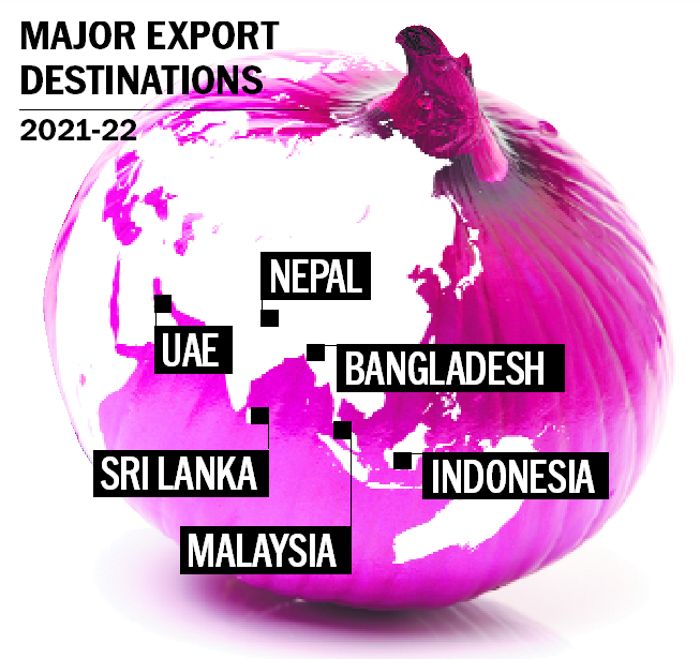 Apply 20 tonnes of well-rotted farm yard manure (FYM), 40-kg nitrogen (90-kg urea), 20-kg phosphorus (125-kg superphosphate) and 20-kg potash (35-kg MOP or Muriate of Potassium) per acre. Apply full dose of FYM, phosphorus, potash and half of nitrogen at the time of field preparation before nursery planting and broadcast the remaining half nitrogen just after four weeks of the nursery planting.

Apply 3-4 hoeings to control weeds. The first weeding should be done after three weeks of planting and the others applied at 15 days’ interval. Weedicides may also be used to control the weeds at the proper stage. Apply 750-ml stomp 30EC (Pendimethalin) or 380 ml of Goal 23.5 EC (Oxyfluourfen) using 200 litres of water per acre within one week of planting; it should be supplemented with one weeding after 60 days, if needed.

Harvesting may be done in the last week of November or the first week of December. It should not be delayed, otherwise bolting may occur and the bulb quality will deteriorate. The green bulbs may also be marketed if there is any green onion market. The uprooted crop along with the stem leaves should be kept in store having 28-30°C temperature with a thin layer. The bulbs should be turned after some days and injured and rotted bulbs should be sorted out. The leaves should be chopped at the time of marketing.

India is the second-largest onion-growing country in the world (after China). Indian onions are famous for their pungency and are available round the year. 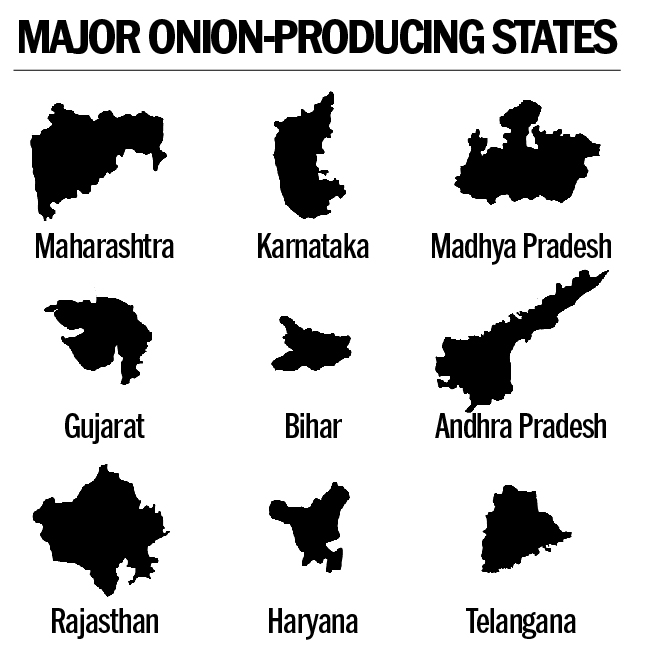 Indian onions have two crop cycles: first harvesting starts from November to January and the second from January to May.