The job guarantee scheme kept the rural sector afloat during the pandemic-induced lockdown. The number of people employed under MGNREGA in Punjab has gone up considerably. 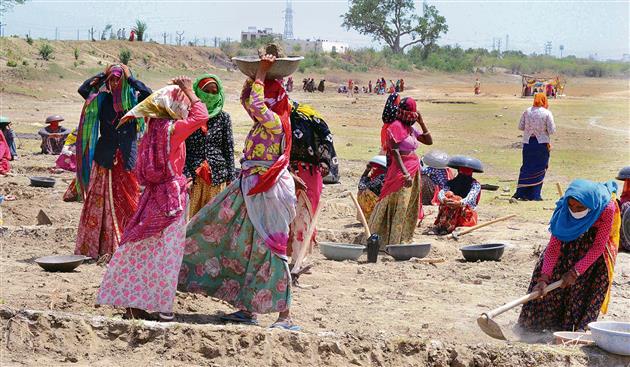 Workers rendered jobless following the Covid outbreak have got a new lease of life.

AMID the Covid crisis, the Mahatma Gandhi National Rural Employment Guarantee Act (MGNREGA) has sustained thousands of villagers who had been rendered jobless across Punjab. These also include the youth who returned to villages after they lost their jobs in towns and cities.

After the lockdown was first imposed in March-end, the rural sector in the state rose to the challenge of harvesting wheat despite many restrictions, even as vegetable/fruit growers, dairy and poultry farmers faced a tough time. The government handled 3,700 procurement points and created 1,100 new ones this time to ensure social distancing.

The Department of Rural Development and Panchayats has made effective use of the MGNREGA scheme to bail out unemployed people, particularly in villages.

The average number of working days under MGNREGA was 31 in Punjab in the financial year 2019-20. The work is said to be progressing even better this financial year. The average was less than 20 about a couple of years ago.

Financial Commissioner (Rural Development and Panchayats) Seema Jain says, “In the Average Daily Progress Report, the number of people employed under MGNREGA in Punjab was 1.5 lakh during 2019-20. The figure has gone up to more than 2.2 lakh in the current financial year.” As a result, the state has been able to clean at least 6,200 ponds this year.

Gurcharan Singh, sarpanch of Sangat Khurd village in Bathinda district, says “We have been regularly getting funds for our ongoing projects of water works and general sanitation. There has been an increase in the workforce during this time. The scheme has been beneficial particularly for many people who used to travel outside the state for jobs.”

In contrast, certain villages complain that they are being ignored. Hardeep Dakha, sarpanch of Fazilka’s Khanwala village, located on the Indo-Pak border, says: “As we are supporters of an opposition party, our village has not been given MGNREGA projects. Villages located 17 km from the border are being given money under the Border Area Development Fund, but we are being denied the same.”

Wheat harvesting was challenging this time because the traditional workforce which came from Bihar and Uttar Pradesh could not enter Punjab due to the lockdown/curfew. The harvesters came in large numbers from the towns and cities of the state where they worked in the construction or catering business, or as taxi drivers. Also, a significantly large number of family members of farmers took part in harvesting this year.

Besides increasing the number of mandis for procurement, the government also extended the procurement season till June 15. The movement of wheat to and from the mandis remained smooth.

The crash in capsicum prices forced irate farmers to throw a tractor-load of their produce on the Mansa-Bathinda road in April. Others who faced such problems included fruit growers, dairy and poultry farmers. Specific losses were worked out in a study conducted by the Centre for Research in Rural and Industrial Development (CRRID) in the first week of May.

Dr Sucha Singh Gill of the CRRID says, “The imposition of curfew in the state in March disrupted the supply chain from the farm to the market. The labourers were not allowed to move out of their homes to work for collection of these products. Vehicles were not allowed to ply on the roads. The perishable commodities remained unsold, causing losses.”

Dr Gills says, “The estimated total loss in four categories (vegetables, fruits, dairying and poultry) suffered by farmers was Rs 1,340 crore during the peak period of the curfew (first 40 days).” Dairying, with losses to the tune of Rs 808 crore, was the worst-hit, followed by vegetable farming (Rs 440.4 crore), poultry (Rs 56 crore) and fruit farming (Rs 36.5 crore).