Despite the rice-wheat monoculture, alternative crops have been grown in several blocks of Punjab over the years — peas, moong, groundnut, celery — with well-established markets. The area under these crops could be expanded by providing value addition and strengthening marketing facilities. It’s imperative to compute water balance for each block of the state, including canal water allocation, vis-à-vis agriculture and other sectors.

PUNJAB’S agriculture is at the crossroads due to several reasons, including depletion of water resources and deterioration in the quality of water. With climate becoming harsher due to rising temperatures and ill-distributed rains, the demand for water in the agricultural sector may rise further. The uncertain rains, higher-than- normal temperatures and deficient electricity during the ongoing paddy season underline the water woes. Industrial growth and improved living standards of the public are expected to raise the water demand in these sectors. This may happen at the cost of water availability for the agricultural sector, thereby threatening the food security of the country and impacting the supply of raw material to many industries.

The groundwater depletion rate in the state has been more severe during the recent decade. The increasing scarcity is reflected in the current negative water balance. With the present annual demand of about 66 billion cubic metres (BCM), the available water in the state (including annual replenishable water) is 53 BCM, leading to a deficit of 13 BCM, which is being met by overexploitation of the groundwater. Of the 138 blocks, 109 are over-exploited and the rest are on a similar path. The water table in the state is falling at an average rate of 65-70 cm/year. Five blocks in Sangrur, two each in Barnala and Jalandhar and one each in Patiala, Moga and Hoshiarpur are expected to experience depletion of the water table depth (WTD) below 50 m by 2030. The WTD in almost half of the state is expected to go below 30 m by 2040 if the groundwater extraction continues at the present rate. Further 8-19% of the area is expected to have WTD to be below 50 m by 2030 and 2040, respectively. 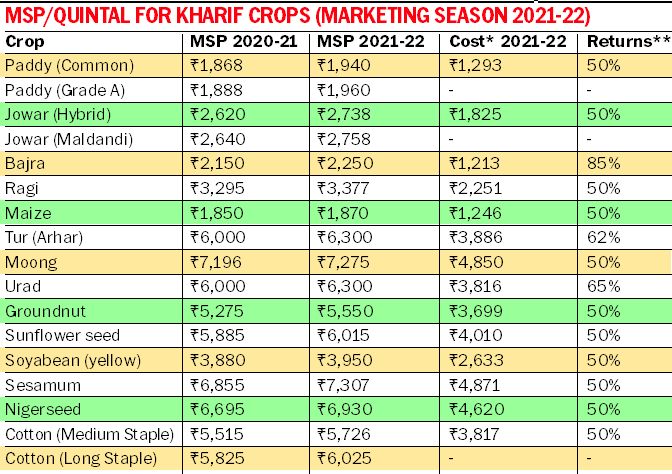 Increasing area under paddy (more than 30 lakh hectares) is taking a toll on the groundwater. The water requirement of paddy in terms of evapo-transpiration is 60-70 cm, depending upon the atmospheric conditions. However, farmers have the tendency to let water stagnate in the fields for 30 to 70 days or more against the scientific recommendation of only 15 days. The direct seeded rice (DSR), advocated as a water-saving practice, has a similar water requirement as that of puddle-transplanted rice. However, the same tendency of farmers to let water stagnate in DSR fields leads to a higher amount of groundwater extraction than that extracted for puddled fields, as the infiltration rate in the former is three times higher than that in the latter.

Apart from paddy, farmers in the potato belt and vegetable-growing areas opt for spring maize, another water-guzzling crop. The spring maize has a similar or slightly higher water requirement in terms of evapo-transpiration than that of paddy. Similar or higher number of irrigations are applied to spring maize than to paddy. However, the amount per irrigation is higher in spring maize fields than in puddled paddy fields due to lower infiltration rate in the latter. This indicates that the spring maize crop is consuming a higher amount of irrigation water than paddy. This is also reflected in the higher groundwater depletion in some blocks of Jalandhar and Hoshiarpur where the water table is expected to fall below 50-metre depth by 2030. In all, about 12 blocks in the state are expected to have the water table below the 50-metre depth by 2030 due to these two water-guzzling crops.

Crop diversification has been advocated since long ago with various proposals, including incentivising the farmers to replace paddy with maize. But these proposals could not see the light of day due to several reasons, the most important being the lack of proper planning for crop diversification at the micro level. The state requires only 5 lakh tonnes of maize for its domestic consumption. Moreover, simply advocating the replacement of paddy with maize or alternative crops without any water balance assessment or identification of best-suited alternative crops in a particular block/region may not let the crop diversification plan fructify.

It is the need of the hour to plan for the replacement of these water-guzzling crops (spring maize and paddy) i.e. diversify the cropping system. Further, the area under wheat also needs to be diverted to oilseeds, pulses or other crops.

The process of crop diversification must start at the lowest unit, a block, prioritising the most severely affected blocks with respect to the falling water table. The water balance of each block needs to be worked out so as to ascertain the water availability for agriculture and other sectors. The groundwater quality for irrigation purposes needs to be assessed in different blocks. Based on the water availability and its quality, some blocks may not need to diversify from rice/wheat, whereas others may have to. Further, these assessments will also determine the extent of area in each block to be diversified from rice/wheat and/or spring maize for sustained use of groundwater.

Despite the rice-wheat monoculture, alternative crops have been grown in several blocks of the state over the years — peas, moong, groundnut, celery — with well-established markets. The area under these crops could be expanded by providing value addition and strengthening marketing facilities. Some crops may be more suitable for specific blocks — bajra, jowar, arhar, guar.

Many niche area crops in the state do not find good support prices, especially during a glut. To overcome such unforeseen conditions, value addition can do wonders. For example, facilities need to be created for the freezing of peas and their packaging for better prices.

Thus, a micro-level plan needs to be prepared for successful crop diversification: