With more than 26,000 cases across 87 countries, the virus, declared a public health emergency of international concern by the World Health Organisation, is travelling fast. A look at India’s preparedness 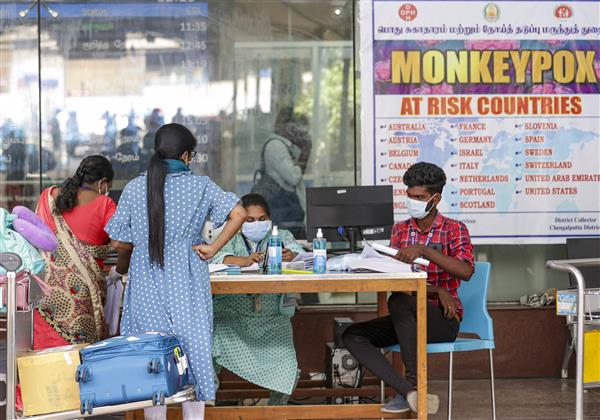 Just when the world thought it could be entering the post-Covid phase, a new public health emergency has surfaced. In less than 100 days, monkeypox, a viral disease with symptoms similar to smallpox but clinically less severe, has spread from two cases in the UK on May 13 to more than 26,000 cases across 87 countries.

Monkeypox is caused by monkeypox virus, a member of the orthopoxvirus genus in the family Poxviridae. It is usually a self-limited disease with the symptoms lasting from two to four weeks. Severe cases can occur. In recent times, the case fatality ratio has been around 3-6 per cent. It is transmitted to humans through close contact with an infected person or animal or with material contaminated with the virus. The route of transmission is from one person to another by close contact with lesions, body fluids, respiratory droplets and contaminated materials such as bedding.

US has most cases

US has the world’s most cases (over 7000) prompting the government there to declare a public emergency. The next highest burden is in Europe in Spain, UK, Germany and France.

Suspected case: A person of any age having a history of travel to affected countries within the last 21 days presenting with an unexplained acute rash and one or more of the following symptoms — swollen lymph nodes, fever, headache, body aches, profound weakness.

Probable case: A person meeting the case definition for a suspected case, and one who has face-to-face exposure, including health care workers without appropriate personal protective equipment; direct physical contact with skin or skin lesions, including sexual contact; or contact with contaminated materials such as clothing, bedding or utensils is suggestive of a strong epidemiological link.

A lab confirmed case by detection of unique sequences of viral DNA either by polymerase chain reaction or sequencing.

Rash with blisters on face, hands, feet, eyes, mouth and/or genitals; fever; swollen lymph nodes; headaches ; muscle aches; low energy. You can catch monkeypox if you have close physical contact with someone showing symptoms. This includes touching and being face-to-face.

Over time, most human infections have resulted from a primary animal-to-human transmission. Unprotected contact with wild animals, especially those that are sick or dead, including their meat, blood and other parts must be avoided. Additionally, all foods containing animal meat or parts must be thoroughly cooked before eating. Human-to-human transmission can be prevented by avoiding close contact with the infected.

At the time of WHO’s first emergency committee meeting on June 25, there were 3,000 cases of monkeypox in 47 countries. On July 23 when the panel regrouped for follow up, cases had galloped more than five-fold to 16,000 affecting 75 countries, prompting the world body to declare a public health emergency of international concern. Since May this year, monkeypox has travelled fast, with India logging nine cases since its first detection on July 14. India also saw a death, one of the only six reported globally so far, outside of Africa.

Historically, monkeypox occurs in central and west Africa with animal hosts of the virus being a range of rodents and non-human primates. After smallpox was eradicated in 1980 and smallpox vaccination ceased, monkeypox emerged as the most important orthopoxvirus for public health responders. The disease, however, remained limited to Africa. The first human monkeypox case was detected in 1970 in a nine-month-old boy in Congo. Since then, human cases have been reported in 11 African countries. The first outbreak outside Africa — in the US in 2003 — was traced to pet prairie dogs that had been housed with Gambian rats and later brought to the US.

This year, it is different. The disease has spread to countries with no history of cases and scientists are still trying to establish the route of acquisition of the virus in the first reported cases from the UK.

“No source has been confirmed yet. Based on available information, the infection seems to have been locally acquired,” says WHO. This means monkeypox has not only entered non-endemic countries, it has found ways to sustain locally. This is a matter of hectic current research worldwide.

NOT COMPARABLE TO COVID

This is the first time in history that the world is witnessing two public health emergency responses to Covid and monkeypox at the same time. Although monkeypox spreads from animals to humans and humans to humans through close skin or respiratory contact with those infected, experts say it is not as transmissible as Covid.

Pragya Yadav, chief of the maximum containment facility at NIV Pune that tests highest risk pathogens, says there is little current evidence to suggest that asymptomatic patients can spread monkeypox.

“Covid can be easily transmitted by asymptomatic patients. But there is no current evidence to suggest the same for monkeypox, though precaution is advisable. Worldwide, the majority of monkeypox cases have spread through close sexual contact and most patients have been males, though France has now reported a 60-plus female patient. Among India’s confirmed cases, one is a Nigerian,” says Yadav, advising people to avoid contact with those infected and symptomatic. On India’s preparedness, Yadav, whose lab has now isolated the monkeypox virus enabling ICMR to invite expressions of interest from private players for indigenous vaccine development, says testing capacity is adequate and will be developed further.

Currently, NIV Pune and 15 Viral Diagnostic Research Labs across India are equipped to detect monkeypox in India. The seriousness of the disease remains debatable, with experts calling for caution but not panic.

“Until the time a vaccine is developed, we would need to respond through behaviour change. We know monkeypox spreads through close skin-to-skin contact with a patient, their clothing, linen, and through respiratory route. Being of any particular sexual orientation doesn’t make one more prone to infection. The key is to avoid contact with those having symptoms,” says the scientist. India has moved fast to invite private industry to produce diagnostics and vaccines for monkeypox. “We still have time since the disease burden is low,” says Yadav.

YOUNG AT GREATER RISK, AND WHY

Monkeypox symptoms resemble those of smallpox, a related orthopoxvirus infection which has been eradicated. Smallpox was, however, more easily transmitted and more often fatal as about 30 per cent of patients died. The last case of naturally-acquired smallpox occurred in 1977, and in 1980, smallpox was declared to have been eradicated worldwide after a global campaign of vaccination and containment.

It has been 40 or more years since all countries ceased routine smallpox vaccination with vaccinia-based vaccines. As smallpox vaccines previously protected people against monkeypox in the west and central Africa and these vaccines are no longer available, unvaccinated populations are now more susceptible to monkeypox virus infection. While one vaccine (MVA-BN) and one specific treatment (tecovirimat) were approved for monkeypox in 2019 and 2022, respectively, these countermeasures are not yet widely available, and populations worldwide under the age of 40 or 50 years no longer benefit from the protection afforded by prior smallpox vaccination programmes, which can explain why a larger share of the patients are young.

A recent New England Medical Journal study found that 98 per cent of the infected were gay and bisexual males while 41 per cent of the patients had human immunodeficiency virus (HIV) infection. The research also revealed that the median age of the infected persons was 38 years and transmission was suspected to have occurred through sexual activity in 95 per cent of the persons with the disease. The study followed 528 patients between April 27 and June 24 at 43 locations across 16 countries. No research subject died, but 13 per cent needed hospitalisation. The UK health watchdog had on July 5 lowered the threat level of monkeypox, noting that it was rarely causing severe illness and was not spreading beyond MSM (men who have sex with men).

With more evidence emerging, the WHO has asked nations with recently imported cases to mount surveillance and containment and ensure a stigma-free health response.