MVCs for heroics on eastern front 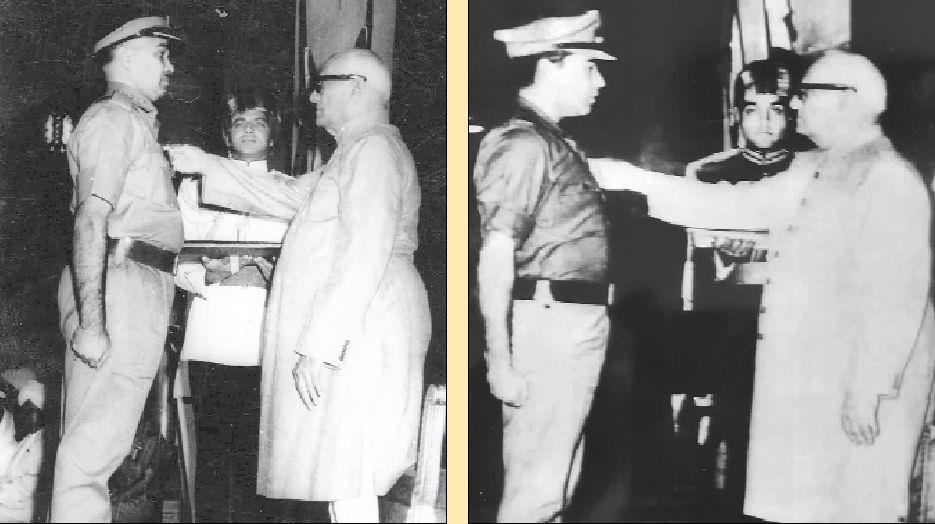 The ‘Pippa’ lurched through the bush and the swamp, crossed a rickety bridge with half of a track sticking out, felt its way with a crewman sitting on the hull and lighting its way with a torch. In the narrow line within which it had to follow a course, a step out could mean getting bogged down or being blown up by an anti-tank mine. A mine ripped the bottom out of one.

‘Pippa’ was what men of the 45 Cavalry called the PT-76 tank. The Russian name for it was Plavayushchiy Tank, floating tank, but the Indian soldiers were using the word to describe a tin can floating on water. It was indispensable for the Indian forces in south-western East Pakistan (now Bangladesh), who liberated the first district, Jessore, on December 6.

Infantry troops piggybacked on, floated and followed the Pippas through a heavily defended Burinda where Pakistan’s 107 Brigade put up a stiff defence.

But before it fell, it held back an offensive by the 1 Jammu and Kashmir Rifles commanded by Lt Colonel Surinder Kapur. Kapur and his men were in danger of being overrun but for three days they fought on as the Pakistani brigade headquarters at Jessore, to its east, decamped and made for Khulna to the south.

East Pakistan was a watery landscape with Bengali villages that typically had ponds with ‘bundhs’ or embankments around them. These were reinforced by the Pakistani brigade with concrete bunkers that slowed down the Indian march to Jessore from the west to the east.

“Lieutenant Colonel Surinder Kapur was commanding a battalion of the J&K Rifles on the eastern front. His battalion was given the task of taking up a defensive position in the Jessore sector to blunt enemy attacks and inflict maximum casualties. Lt Col Kapur displayed great professional acumen and leadership in deploying his battalion in spite of being under enemy artillery and small arms fire. The enemy launched five attacks, in strength, on his battalion position in three days. On each occasion, Lt Col Kapur, showing utter disregard for his personal safety, moved from one locality to another exhorting his men to stand fast. Inspired by his presence and cool courage, his battalion repulsed all enemy attacks, inflicting heavy casualties,” reads his MVC citation.

Burinda was finally taken by the 4 Sikh, also along with a squadron of Pippas. Lt Gen HS Panag, who was then an adjutant with the battalion, has detailed the fall of Burinda (‘Army first beat the Pakistanis in their minds, battle of Burinda is one example’ in The Print) that Brig BS Mehta, who had earlier taken command of a squadron in the middle of a tank-to-tank war, has called “The Burinda Bash”. Burinda took much longer to fall than Jessore.

Part of a compilation of experiences of the war by graduates of the 1966 batch from the Indian Military Academy (IMA), Mehta’s account shows the ‘bash’ was often agonisingly slow. Mehta was standing atop his tank when “one savage sweepback of the cupola hinge resulted in hitting my nose and knocked off a few teeth”.

The battles leading to the fall of Jessore and Khulna were fought by three infantry brigades: 42, 350 and 32 (going from north to south). Jessore itself fell practically without any bloodshed.

Brigadier (later Lt Gen) Joginder Singh Gharaya was commanding the 42 Brigade. He was hit by shrapnel from Pakistani artillery. He continued, having had the experience of being wounded in battle earlier too. He was attacked during the Hyderabad Police action in September 1948.

“Brigadier JS Gharaya was commanding an infantry brigade in the Jessore sector on December 6, 1971. His brigade was attacked on four successive occasions and despite heavy casualties, his troops stood the ground due largely to his excellent tactical handling, outstanding courage, constant presence and guidance,” his citation reads.

“His conduct of this operation was responsible for heavy enemy losses and their withdrawal. During the subsequent offensive operations, Brig Gharaya was with the leading troops when he was severely wounded by enemy fire. He refused to be evacuated till he had seen the attack through as the success of this attack was vital to our further advance in Bangladesh.”

In Jessore, there was not much bloodshed, Sydney Schanberg reported for The New York Times. That was because the Pakistani forces had experienced a mutiny in their ranks and were deeply unpopular. The Mukti Joddha’s leader, Major Manjoor, was in contact with Indian forces through the battles.

The battles within East Pakistan were contrasting even though they were contained within a single geographical unit. This was a consequence not only of the variations in terrain and topography, but also an outcome of the nature of defences that Lt Gen AAK Niazi had planned with spaced-out fortified structures, many of which the Indian troops bypassed finally reaching Dhaka.

While in south-west East Pakistan there were battles that went on for days, in the east and south-east, before Lt Gen Sagat Singh’s dramatic Meghna airlift, there were smaller attempts to get behind enemy lines and/or establish roadblocks.

This was so in Brig Tom Pande’s 61 Mountain Brigade area.

Major Anup Singh Gahlaut’s 3 Dogras in the area were tasked with putting up roadblocks behind enemy lines between Lakshan and Chauddagram to the east and north of the important town of Comilla.

“He infiltrated his company through enemy lines, established a roadblock and inflicted heavy casualties on the enemy. Subsequently, a company of his battalion came under heavy enemy pressure and Major Gahlaut volunteered to go to the assistance of the company. In this mission, he led a platoon and successfully pinned down the enemy company by bringing effective small arms fire on them. His position was, however, attacked by the enemy from a different direction. Undeterred by the overwhelming superiority of the enemy, he rallied his men and succeeded in breaking the enemy attack. Having been mortally wounded in hand-to-hand fighting, he died shortly after his heroic battle.”

The 7th battalion of the Rajputana Rifles was given a comparable mission in the low hills of Mynamati. Naik Sugan Singh was commanding an assaulting section. An air raid earlier by Indian MiG-21s had been partially successful, knocking out a Pakistani tank but unable to take down the defences.

“When the assaulting troops closed in on the objective, two medium machine guns opened fire and held up the assault. Naik Sugan Singh charged at one of them. He received a burst in his shoulder. Although bleeding profusely, he crawled up to the bunker and lobbed a hand grenade, killing two men. Although he had bled profusely, he charged at the second medium machine gun; he could not carry himself far and fell down. But undeterred, he pushed a grenade into the bunker, killing three of the enemy. He himself was also killed.”,