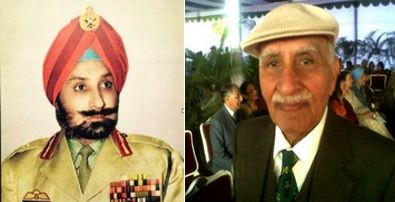 Chakra awards are associated with the bravery displayed in the face of the enemy. During war, the senior-level commanders’ primary role is planning of operations based on overall strategy and for that they need not be personally facing the enemy. They perform the most challenging tasks by formulating operational plans sufficiently simple and flexible for the junior commanders and leaders to execute.

A military operation seldom proceeds as planned because the enemy’s reaction can never be factored in since his representative wouldn’t be on board while planning. During execution, the senior commanders follow minute-to-minute progress of the battle and should the execution get stalled or even boomerangs, take on-the-spot decisions to ensure success. They are not just responsible but also accountable for the successes as well as failures. By shouldering such huge responsibility, and being accountable for the outcomes, are they any less Virs or Maha Virs?

Brigadier Hardev Singh Kler, AVSM, and Brigadier Anand Sarup are among the seven Brigadier-ranked officers awarded the Maha Vir Chakra during the 1971 India-Pakistan war on the eastern front.

Brig Kler, a third generation soldier, belonged to the illustrious Kler family of Kakrala Kalan near Ludhiana. His father Captain Chhajja Singh earned the Order of British India (OBI) award during the Second World War. Hardev, his second son, carried forward the legacy earning the Ati Vishist Seva Medal in the 1965 India-Pakistan war and the Maha Vir Chakra during Operation ‘Cactus Lily’ in 1971, thus becoming the highest decorated Kler in the family.

After graduation from Gordon College, Rawalpindi, Hardev was commissioned into the Corps of Signals in 1943. At 19, he was the youngest Indian to have been commissioned into the British Indian Army. After five mandatory parachute jumps as a volunteer, he was given an option to permanently get seconded to the elite Paratroopers Brigade. Hardev, now a Captain, declined the option, and not without considered reason; Captain Chhajja Singh, his father, had earned all the laurels as a dedicated Signalman and young Hardev preferred following in the footsteps of the senior.

During the 1965 war, Hardev, as Lieutenant Colonel, for his distinguished wartime services rendered during ‘Operation Gibraltar’ was awarded the AVSM, a rare honour for a Lt Col.

During Operation ‘Cactus Lily’, Hardev Kler, now a Brigadier, while commanding 95 Mountain Brigade in the eastern theatre, boldly led the advance with Dhaka as the terminal objective. By December 8, the brigade under his command contacted Jamalpur, strongly held by Pakistan’s 93 Infantry Brigade. The fortress Jamalpur, though encircled, held on even after Brig Kler, through a messenger, urged Lt Col Sultan, the head of Jamalpur Garrison, to surrender. The reply by the Pakistani Col showed that despite the chips going down steadily, the morale of the Pakistani commanders was far from down. Sultan sent back a defiant reply, enclosing a bullet in his letter. The letter reproduced below surely deserves a place in military history.

Hope this finds you in high spirits. Thanks for the letter.

We here in Jamalpur are waiting for the fight to commence. It has not started yet. So let us not talk and start it. 40 air sorties, I may point out, are inadequate. Please ask for many more.

Your remark about your messenger being given proper treatment was superfluous. Shows how you underestimate my boys. I hope he liked his tea. Give my love to Muktis.

Hoping to find you with a sten gun in your hand next time, instead of the pen you seem to have so much mastery over.

I am, your most sincerely

Col Sultan, however, was unaware of the fact that when he dispatched the letter, with a 9 mm live bullet enclosed, the 95 Mountain Brigade Group was sitting behind him south of Jamalpur.

During the final assault on Jamalpur by 1 Maratha Light Infantry, Brig Kler advanced along with the forward platoon of the Marathas, with a loaded sten gun in hand. But he could not show to his counterpart that though a Signalman, he was equally proficient in handling the small arms, since on the night of December 10/11, Col Sultan along with Brig Abdul Qadir Khan, Commander of 93 Pakistan Infantry Brigade, together with 31 Baluch had pulled out of Jamalpur and took defences at Tangail 9 km in the rear.

Throughout, Brig Kler remained close to the leading troops and ensured the execution of his plan, without breathing on the neck of the commanding officers.

“Brigadier Hardev Singh Kler, AVSM, was commanding a mountain brigade on the eastern front. He led the advance of his brigade from Jamalpur up to Turag river. During all the actions in the advance, Brig Kler was personally present with the leading troops and directed the operations with complete disregard to his life. By personally going into the thick of the battle, he provided great inspiration to his troops who had laid siege behind enemy positions south of Jamalpur. Under his command, the brigade inflicted heavy casualties on the enemy and captured 379 prisoners as well as large quantities of weapons and ammunition.”

His son, Flight Lieutenant DJS Kler, also fought the war in the eastern theatre and in the same sector — quite unusual for father and son fighting on the same front.

After Senior Cambridge from King George’s Royal Military College, Jalandhar, Anand cleared the Indian Military Academy entrance test. Despite communal tension prevailing in Punjab as a fallout of Partition, he made his way from Jalandhar to the Services Selection Centre at Meerut as a stowaway in a vehicle carrying a British Colonel’s luggage. After successfully clearing the selection process, Anand joined the Academy and was commissioned into 8 Gorkha Rifles in 1949.

Within a fortnight of the raising of the ad hoc force, after intensive yet planned joint training, Brig Sarup welded 5,000 to 6,000 men under his command into a cohesive fighting force. At the outbreak of war, ‘K’ force was launched into the battle from its firm base in Mizoram near East Pakistan border.

After declaration of the war on December 3, the Kilo Force surged forward. After winning over some hard skirmishes en route, the hot pursuit got stalled at Feni town, which was strongly defended by two enemy companies. Feni was a tactically important road and rail route to Chittagong harbour and needed to be captured to cut off the harbour from the rest of East Pakistan. Based on a reconnaissance report, Brig Sarup formulated a bold plan and by December 6, Feni was captured.

The force also captured and occupied Karrehat and Zorarganj by December 8 and commenced its advance to Chittagong. To speed up the capture of Chittagong, Kilo Force was reinforced with 83 Mountain Brigade under the overall command of Brig Sarup. After fighting through and clearing Kumarighat held strongly by two enemy companies, 15 Baluch and 25 Frontier Force, Kilo Force reached Faujdahat on the outskirts of Chittagong on the night of December 13/14 when operations were suspended.

At Faujdahat, the force, under the dynamic leadership of Brig Sarup, intercepted the enemy’s withdrawal and captured almost a battalion size of Prisoners of War and a great amount of arms and ammunition. The aggressive role played by the ‘K’ force contributed a lot in the Indian Army’s comprehensive and early victory on the eastern front.

During the entire operation, Brig Sarup, for his bold planning, outstanding leadership and conspicuous bravery, was awarded the Maha Vir Chakra. The battle account on his award reads:

“Brigadier Anand Sarup was allotted the task of organising and launching into battle an ad hoc force for engaging the enemy at Pathanagar and in the area north of Feni town in eastern theatre. He organised and trained this force in a very short period and the troops under his command fought gallantly during the battles at Feni, Nazirhat, Kumarighat and Faujdahat. During the operations, Brig Sarup was constantly on the move, well forward with his troops, directing the operations. Under his leadership, the capture of Feni isolated the Chittagong harbour, which negated the war effort of Pakistan to a great extent. Capture of strongly held Kumarighat defended locality was truly the hallmark of the bold and innovative planning by Brig Sarup and equally bold execution by the troops under his command.”

Both the Maha Virs superannuated as General Officers.