The agency-wise share indicates that agricultural credit dispensation in the country is heavily dependent on commercial banks and points towards the poor credit delivery capability of cooperative banks and regional rural banks. 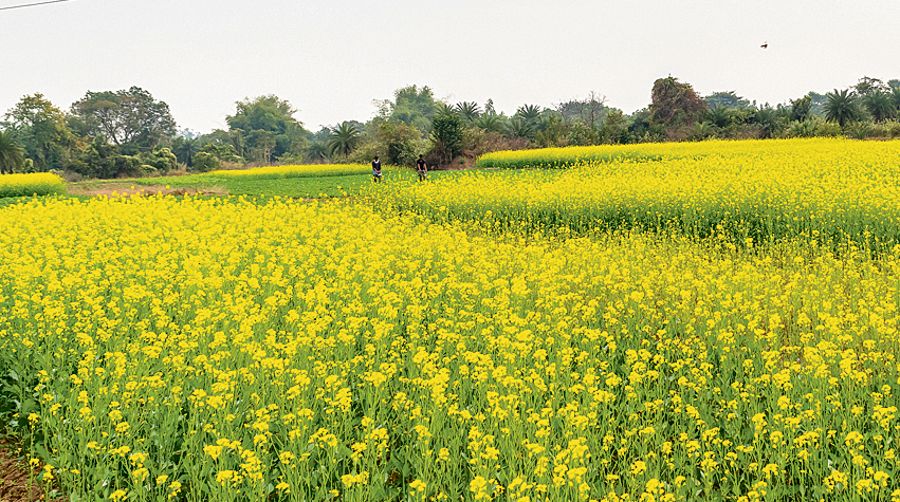 THE availability of finance is a key driver of progress in any sector. In the case of agriculture, access to adequate credit assumes vital significance since most of the agriculturists are small or marginal farmers. It has been argued that credit provides control over resources and facilitates liquidity to the farmers. A defining feature of agricultural credit is that it is an indirect input that enables the farmer to redirect agricultural activities and adopt modern production technologies, which have a bearing on what happens on his farm and, ultimately, on his income and livelihood. This criticality of agricultural credit lends it a power that no other indirect input has commanded. The provision of institutional credit has always occupied a central place in planned development of India.

The agency-wise share indicates that agricultural credit dispensation in the country is heavily dependent on commercial banks and points towards the poor credit delivery capability of cooperative banks and regional rural banks. A study by NABARD shows that medium and large farmers, who account for barely 14% of the total number of farmers, are getting 48% of the total agricultural credit, while small and marginal farmers — 86% of the farming community — are receiving 52% of the credit disbursal in the agriculture sector. 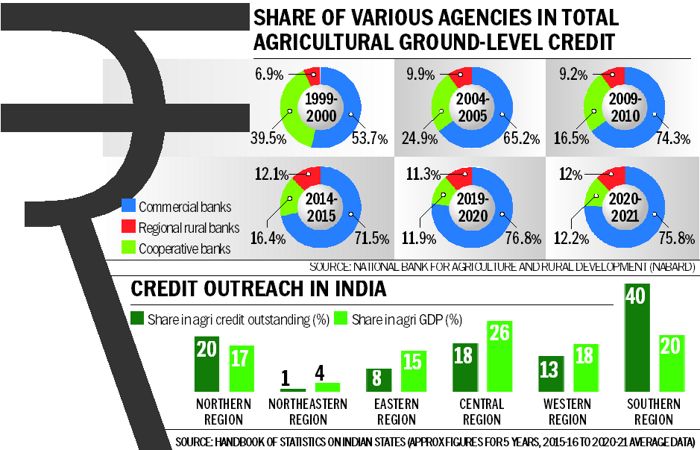 The agricultural credit delivery system in the country is characterised by the coexistence of informal and formal sources of credit supply. The informal sources mainly include commission agents, traders, private moneylenders, etc. Before the beginning of the planning era in India, almost all credit requirements of agriculture were met by usurious informal sources. Since Independence, interventions have been made by the Government of India for unconstrained credit expansion through institutional sources to protect the farmer’s interest and spur impel agricultural growth.

It is heartening to note that the flow of institutional credit to agriculture grew by around 13% in the last decade and banks have been overachieving the long-term credit targets since 2016-17.

Among the three credit-purveying agencies — commercial banks, cooperative banks and regional rural banks (RRBs) — commercial banks enhanced their agri-credit growth at a faster pace since 2004-05 and increased their share from 53.7% in 1999-2000 to 75.8% in 2020-21. RRBs accounted for a share of 12.1% in 2020-21, which is an improvement on their share of 6.9% in 1999-2000. The agency-wise share indicates that agricultural credit dispensation in the country is heavily dependent on commercial banks and points towards the poor credit delivery capability of cooperative banks and RRBs.

Inclusiveness in terms of regional distribution of credit should be another policy concern. Notably, the five states of southern region together account for almost 40% of the amount disbursed by scheduled commercial banks (SCBs). The next largest share in terms of amount is cornered by the northern region and is almost half of the southern one. Surprisingly, the central region, despite contributing 26% share to the agricultural GDP, receives lower outstanding amount than the southern and northern regions. Similarly, the eastern region’s share in credit outreach is quite low compared to its contribution to the agricultural GDP. Some studies claim that the higher share of the southern region may be because of better infrastructure facilities, better outreach and credit delivery outlets. But, it is important to note that the central region ranks second in terms of rural and semi-urban braches of SCBs (21.5%), just after southern India (27.74%). Moreover, these institutional outlets in the eastern region are higher (17.99%) than that in the northern region (16.62%). Therefore, the skewed distribution of agricultural credit across regions calls for policy-based redress.

The policy stakeholders might be aware of these regional distortions, but a more practical approach is needed. The Internal Working Group (IWG) report-2019 of the RBI reveals that the demand for rural credit, including agricultural credit, in the states falling under central, eastern and northeastern regions is low. Therefore, concerted efforts are warranted to deepen the credit absorption capacity in these states. The Rural infrastructure Development Fund (RIDF) of NABARD, which is mainly used for rural projects such as irrigation, connectivity, health and sanitation has the potential to create necessary credit absorption capacity in rural areas. But, as per the IWG report, allocation to the RIDF has been declining over the years, from 61 per cent in 2008-09 to 18 per cent in 2019-20. Considering its significance in stimulating rural credit demand, there is a need to increase the share of RIDF allocation.

Revisiting the uniform norm of the current priority sector lending (PSL) — 8% credit to small and marginal farmers under the 18% overall target of agricultural credit — is widely recommended by policy experts. Dr HK Bhanwala, former Chairman, NABARD, has opined that PSL targets should be fixed on the basis of regional realities. As small and marginal holdings constitute 95%, 82% and 86% of the total operational holdings in the eastern, north-eastern and central regions, respectively, therefore the PSL targets should be of a higher order for these regions.

Digitisation of land records, which is underway in most states, needs to be completed in the mission mode particularly in underserved regions. This can provide the much-needed reform at the bank branch-level for credit expansion at the click of a button. Digitisation of land records will also be of great help in checking over-financing on the same land and thus pave the way to bring vibrancy in developing a land lease market.

The author is a scientist at ICAR-Indian Grassland and Fodder Research Institute, Jhansi. Views are personal