No permanent enemy or friend, only permanent interest : The Tribune India

No permanent enemy or friend, only permanent interest

The rapidly changing political landscape in Maharashtra since what seemed to be a clear verdict on Oct 24 has had the nation engaged and enraged in equal measure. The BJP, Shiv Sena, NCP and Congress have more than lived up to the dictum that ‘politics is the art of the possible’. That said, it’s also a reiteration that regional parties and leaders remain the key drivers in Indian politics 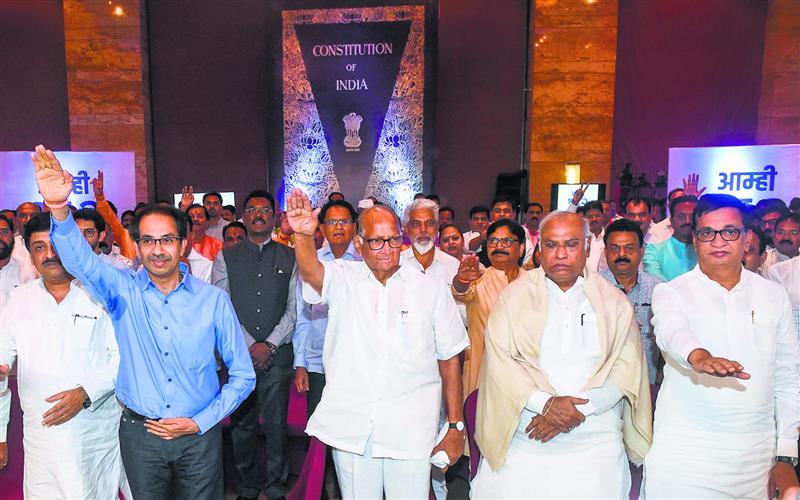 MAN OF MATCH: NCP supremo Sharad Pawar, flanked here by Chief Minister Uddhav Thackeray and Congress’ Mallikarjun Kharge, has shown that ‘strongman’ is not a tag he takes lightly, and the opponents certainly should not. In stitching an unlikely alliance in Maharashtra, he has singlehandedly taken on the might of Narendra Modi and Amit Shah. PTI

That ‘a week is a long time in politics’ is a famous quote attributed to former British Prime Minister Harold Wilson. Well, if that remains true of politics in the 21st century, in the case of Maharashtra paradoxically, it proved both right and wrong.

The results of the 288-member Maharashtra Assembly elections gave a mandate which on the surface was clear on October 24 — return of the Bharatiya Janata Party-Shiv Sena coalition. Yet, for the next 30 days, denizens of the state were not sure who would lead the next government. And lo and behold, on the 31st day, suddenly Devendra Fadnavis was sworn in as the Chief Minister with a new partner, Deputy Chief Minister Ajit Pawar of the Nationalist Congress Party.If it took all of four weeks for the new coalition to come to power, it took exactly a week for an unusual post-poll combination of Shiv Sena, Nationalist Congress Party and the Indian National Congress to take over the reins of the administration of the state in Mumbai, the commercial capital of the country.

That brings to mind oft-quoted sayings: “Politics makes strange bedfellows”, attributed to American political writer Charles Dudley Warner or a matching “Politics is the art of the possible, the attainable — the art of the next best”, ascribed to German Chancellor Otto van Bismarck.

While the exercise can continue, the basic theory while looking at the developments in Maharashtra brings home the undeniable fact that regional parties and regional leaders irrespective of the status of the party — national or provincial — remain the key drivers in Indian politics.

Coming of age of regional parties

Around the time the country achieved Independence with the Indian National Congress being in the vanguard of ushering in the transformation of a nascent democracy, leaders who held a sway over regions formed its rock solid base. If the East could boast of a Dr Bidhan Chander Roy, the South could take pride in K Kamaraj or Tangaturi Prakasam. In the northern plains stood stalwarts of the likes of Gobind Ballabh Pant, Bhim Sen Sachar or Pratap Singh Kairon of Punjab, to name a few.

Over the years, as the predominance of the Congress party and its hold on national politics ebbed, many a leader of different persuasions moved away to form parties with distinct political ideologies and thought, which once were integral to the Grand Old Party. The Congress was characterised not as a party, but a mass movement of people of all shades united under its umbrella.

The roots of regional leaders were strong and by the mid-1970s, regional parties began to dot the Indian political landscape. If in the South, the Dravidian parties blossomed, the North witnessed the rise of the Akalis in Punjab, the National Conference in Jammu and Kashmir, and variants of Socialist formations across Uttar Pradesh and Haryana. The Left parties dug in their heels in the East in general and in Kerala down South. The Northeast, too, had a fair sprinkling of parties with distinct regional flavour.

It is also not the first time that alliances of various hues have come together to form a government. This model was moulded perhaps for the first time in Maharashtra itself by Sharad Pawar in 1978, forming the Progressive Democratic Front Government (July 1978-February 1980) consisting of Janata Party, the Samantar Congress and the Peasants and Workers Party. That brief stint as one of the youngest Chief Ministers at 38 propelled Pawar on to the national stage, which he set afire during his twilight years four decades later in doing the unthinkable: making the Congress extend support to the right-leaning Shiv Sena.

Yet, political history in the country is replete with many such instances of parties with competing political interests shaking hands at an opportune moment to form a government, while doubts about its stability continue to nag.

At the national level, the first such experiment was when Charan Singh had no qualms in taking support of Congress (Indira) though Indira Gandhi was the raison d’etre of the formation of Janata Party.

In the regional plains, especially in the Hindi heartland, there are numerous such instances when two or more regional parties rubbed shoulders to stop the march of political rival(s) to the seat of power or come to forefront and offer leadership.

The Bahujan Samaj Party and the Samajwadi Party, after a bitter divorce in 1993, buried differences to come together in 2017 in Uttar Pradesh, while closer home in Haryana, Bhajan Lal simply repainted his party board overnight to become the Congress in the 1980s. Kuldeep Bishnoi, his son and founder of the Haryana Janhit Congress, did a reverse switch.

In Himachal Pradesh, the erstwhile Himachal Vikas Congress was in and out of partnership with the BJP, while in Bihar, the Janata Dal (United) had no qualms in walking in and out of an alliance with the Rashtriya Janata Dal and moving seamlessly towards the BJP.

The latest saga of separate poles moving closer happened as recent as five years ago in Jammu and Kashmir where the Peoples Democratic Party and the BJP formed a government. Nationally, this year saw the Telugu Desam Party dropping all pretensions to share a platform with the Indian National Congress, whose attitude in 1980s triggered the formation of the regional party.

A common thread is that parties with national presence cannot afford to ignore or push aside leaders who dot the regional landscape. A strong central leadership may flourish for a while, but would begin to flounder. You can ignore the regional leaders at your own peril.

These instances bring back another saying credited to William Clay: “This is quite a game, politics. There are no permanent enemies, and no permanent friends, only permanent interest.”

Popularly known as “Gulshah”, he served as the Chief Minister of Jammu and Kashmir between July 1984 and March 1986. He broke away from the National Conference with a dozen legislators, bringing down the government of Farooq Abdullah, and came to power with the help of the Congress. His government was later dismissed.

Was the CM in 1984 for a short period of 31 days. At a time when his leader NT Rama Rao was away to the US for treatment, Rao defected and was supported by the Congress. He was sworn in by Governor Ram Lal. NT Rama Rao launched a counter move, including a dramatic wheelchair climb on the Raisina Hill. Eventually, the Governor was recalled and Rao’s government was re-instated in Andhra Pradesh.

Last year in July, Karnataka saw a political drama similar to Maharashtra. The BJP leader with less than clear majority was sworn in as the CM after the Janata Dal (Secular) and Congress joined hands. The combine claimed majority and after efforts to cobble up support failed, BSY resigned and preferred not to take the trust vote. It is only later that he became the CM after the JD(S)-Cong coalition came apart this year.

Earned the sobriquet of “Ek Din Ka Sultan” for holding the office for just a day in February 1998 after Governor Romesh Bhandari installed Loktantrik Congress leader Pal, who claimed majority in the UP Assembly. Kalyan Singh, whose government was dismissed, challenged the decision and the court ordered a floor test with both CMs claiming majority seeking votes. Kalyan Singh won by 20-odd votes and was re-instated.