No respite in sight for Punjab farmers

Proposals fail to enthuse farmers and farm policy-makers in Punjab 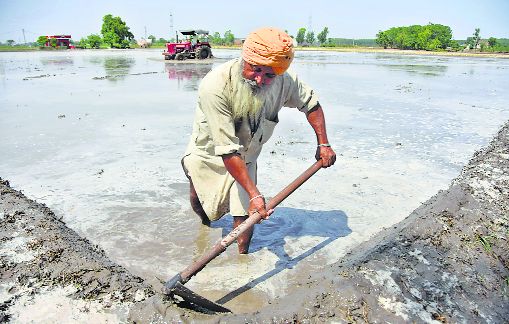 Budget hailed as pro-farmer by various lobbies has failed to enthuse farmers and farm policy-makers in the agrarian state of Punjab. The Budget proposals are being viewed with suspicion as there is a perception that these are meant to benefit the farm equipment, farm machinery and farm logistics industry rather than bailing out distressed farmers.

In Punjab, agrarian stress has perhaps never been so bad, especially with rural indebtedness being high. According to data collected by various farm unions, as many as 501 suicides by debt-ridden farmers were reported last year, and 536 in 2018. This data also reveals that over the past few years, the number of suicides by distressed farmers has gone up substantially. In this scenario, the state government, farmers and farm policy-makers were looking forward to two major things in the Budget — a road map for increasing farmers’ income and resources and a clear policy for crop diversification. This, they say in unison, has been found missing in the Budget.

A majority of the farmers are dependent on the government-offered Minimum Support Price (MSP) of crops and are unwilling to take any risk by trying to diversify into other crops. The state government has been talking of crop diversification, especially in the horticulture sector. However, the efforts are too few and far between. With its limited resources, the government finds itself pushed to the wall and can offer little to farmers to go in for crop diversification.

Dr MS Sidhu, an eminent agro-economist, says one sure-shot way of lifting the state’s sagging economy would be to opt for crop diversification. “Policy-makers in Punjab have been making a case for diversification from the wheat-paddy cycle for many years. But no road map on changing the cropping pattern has been offered in the Budget,” he rues.

Though the Congress government did try to mitigate the woes of farmers by coming out with an Agriculture Debt Waiver and Debt Relief Scheme, it was implemented on a much smaller scale than previously envisaged, simply because the state has few resources to spare after meeting its committed liabilities. “The Budget talks of doubling our income by 2022. The only things that doubles are the debt and the input costs. Our spending capacity has been drastically reduced, and farming is no longer a viable economic activity,” says Surinder Singh, a farmer with a medium landholding at Begowal, Kapurthala.

Many schemes offered in the Budget — the Pradhan Mantri Urja Suraksha evam Utthaan Mahabhiyan (PM KUSUM) and Krishi Udan — are not going to be of much help. Punjab has not had a very positive experience with some of the schemes that were rolled out in the past. The then Akali-BJP government had tried to implement a scheme for turning farmers into independent solar power producers and also offered farm land to corporates for setting up solar power projects, but the move came a cropper. Even the schemes for turning farmers into entrepreneurs by building warehouses have not yielded the desired results.

Sukhdev Singh Kokrikalan, general secretary of Bhartiya Kisan Union (Ekta Ugrahan), says the government’s focus seems to be on corporatisation of agriculture as most of the schemes announced are apparently meant to encourage corporates to enter the agriculture sector and reap dividends at the cost of farmers. “That is why they are talking of open farm markets, where corporates will enter foodgrain procurement. They will obviously be privatising procurement. The Budget is anti- farmer and pro-corporate,” he says, adding that the farm unions would oppose the newly announced policy on free markets.