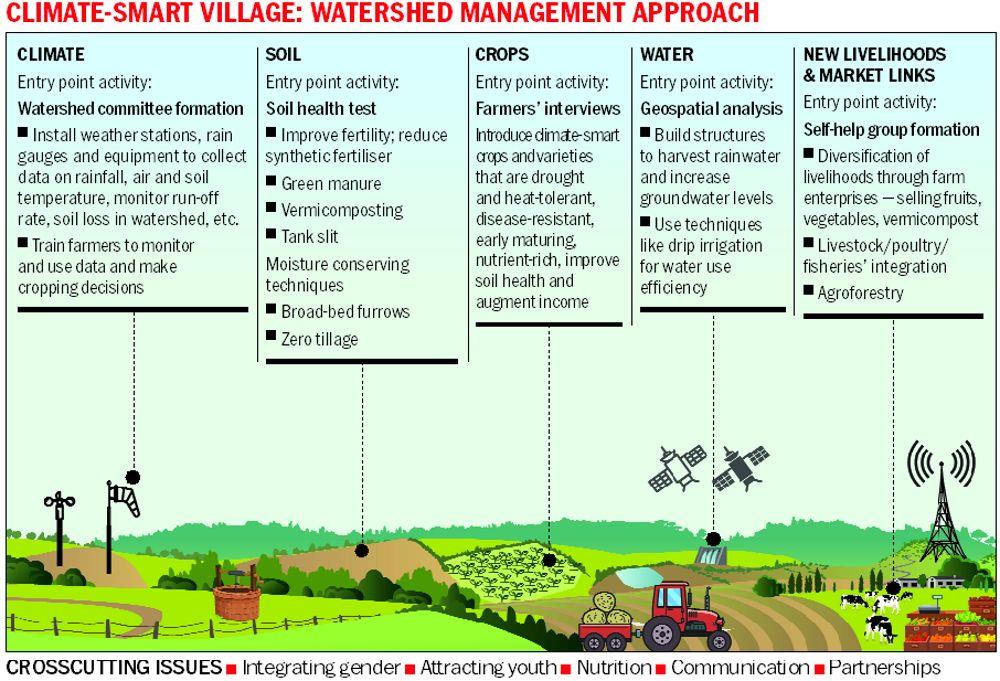 THE ongoing climate talks at COP26 have recognised the interlinkage between agriculture and climate change. Climate change and higher temperatures eventually reduce yields of some crops, while encouraging weed and pest proliferation. The high frequency of droughts increases the likelihood of crop failures and loss of incomes from livestock. If timely action is not taken, the natural resource degradation can further reduce crop yields in India, which are already low compared to global averages. For instance, the productivity of rice in India is 13% lower than the global average.

Land and water resources are already overexploited in many parts of India. India’s share in the total land area of the world is just 2.4%, but it supports 18% of the global population. The average size of operational landholding has declined from nearly 3 acres in 2010-11 to 2.08 acres in 2018-19. The latest NSS data shows that of the 9.3 crore agricultural households in India, 70.4% hold less than 2.5 acres. The average monthly income of agricultural households is just Rs 10,218 from all sources, with income from wages (Rs 4,063) being higher than income from crop production (Rs 3,798) and income from livestock (Rs 1,582).

There is overwhelming evidence that if farmers follow integrated farming systems with a mixture of crops and livestock along with the wider adoption of modern technology like precision farming, they can double their income and make farming climate-resilient at the same time.

In the near future, India needs to increase its agricultural production at least by 30% not only to meet its growing domestic demand and exports and also to boost farmers’ income and employment. Given the limited scope for increasing domestic demand, farmers have to focus on export-oriented crops such as plantations, horticultural crops, commercial crops like cotton and chillies with precision farming technologies to meet export quality standards.

The predominantly irrigated areas and dryland areas are different in their agricultural practices and opportunities. For example, in general, crops yields are more than twice in irrigated areas than drylands.

Successive governments built medium to large irrigation projects for irrigating the crops. However, since the past 30 years, the importance of tubewells increased to tap groundwater, with many states implementing free electricity for agriculture. Now, the irrigated area constitutes about 40-50% of the cropped area. The rapid increase in the number of tubewells, even in water-scarce zones, resulted in the expansion of area under water-guzzling crops like paddy, wheat and sugarcane. This halted the adoption of water-saving technologies like drip and sprinkler systems and crop diversification towards less-water-intensive and higher-value crops like plantations, horticulture, cotton, oilseeds and pulses which fetch high income to farmers.

This resulted in lowering of the water table in many states, including Punjab, Haryana and Telangana. Nearly 80% of groundwater reservoirs in Punjab and 60% in Haryana are over-exploited. It is time for wider adoption of technologies which maximise farmers’ income for each drop of water by using modern methods like precision farming. Remote monitor-and-track systems are available to assess soil moisture levels and make timely irrigations decisions. This not only helps eliminate over/under-watering but ultimately helps conserve water and maximise farmers’ income.

Hence, governments have to promote these technologies with subsidies and technological back-up with private partnerships. The pricing of natural resources such as water also encourages farmers to adopt water-saving technologies which are 70-80% more efficient than conventional irrigation and also increase yield by 30-40%.

Farmers are over-using urea and underusing micro-nutrients, leading to imbalanced use of nutrients and less yield. Although the use of fertilisers has contributed to agricultural productivity, their imbalanced use not only reduces yield, but also pollutes soil and water, making them less sustainable for agricultural and human use. Farmers have to use fertilisers based on soil health card recommendations for maximum crop yields.

Indian farmers are monsoon-dependent, especially dryland farmers who constitute 50-60% of the farming community. Dryland farmers depends on monsoon rains from June to September; the rest of the year, they have to depend on the moisture available in soils or use stored water from farm ponds to grow crops in the post-rainy season. In drylands, soil and water conservation technologies like farm ponds are crucial. With the adoption of these technologies, the possibility of growing two crops in a year will increase, in addition to a substantial increase in grain yield.

With the increase in pressure on land due to the rise in population, there has been a significant increase in land degradation over the past years, especially in drylands. According to the UN Convention to Combat Desertification, land degradation is the “reduction or loss of biological or economic productivity of the land due to climatic factors and also due to human intervention”. About 30% of India’s geographical area is classified as degraded land. The adoption of integrated farming systems (an approach to maximise the yield of a mix of crops and livestock to provide steady and stable income at higher levels), investments in soil and water conservation technologies, and incentives for the adoption of these technologies are vital to reclaim these degraded lands and increase yield.

The marginal and degraded lands are inhabited mostly by the poorest of the poor and used as grazing lands for animals. These technologies not only increase agricultural production, but also give livelihood options to these people. However, these technologies will require social engineering and better watershed management, which are hard to achieve without community participation.

Overall, farming in irrigated and dryland areas needs a substantial change in the approach for the adoption of new technologies to achieve the national goal of doubling farmers’ income. Climate-resilient technologies can play a crucial role to sustain gains, which are also in line with India’s international commitments like Land Degradation Neutrality (balancing loss due to land degradation with land restoration and sustainable land management) at COP26.