Pain of past in idiom of present: Remembering modernist sculptor Amarnath Sehgal in his birth centenary year : The Tribune India

Pain of past in idiom of present: Remembering modernist sculptor Amarnath Sehgal in his birth centenary year 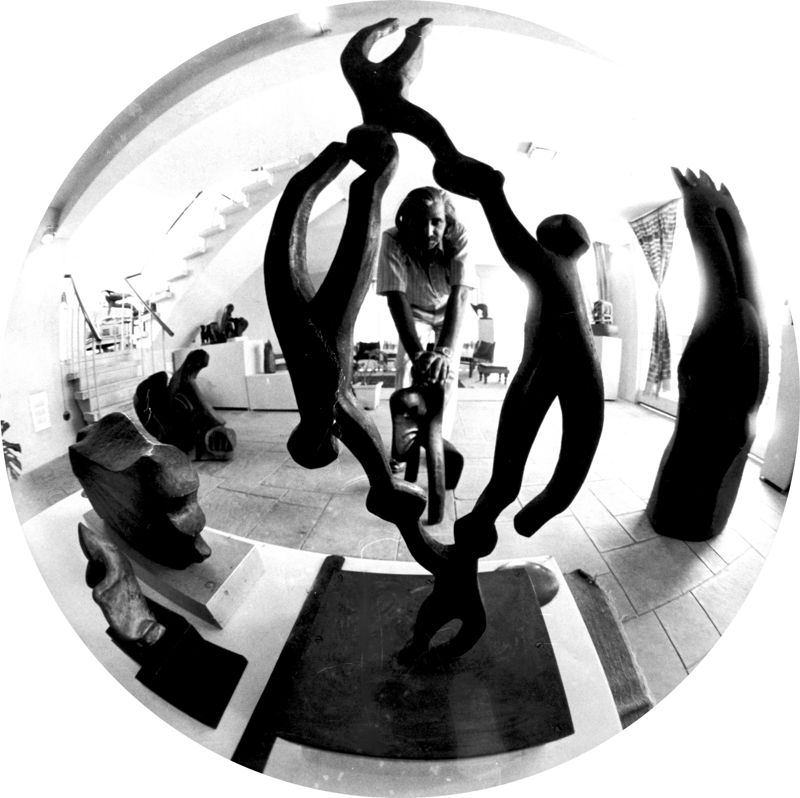 Amarnath Sehgal’s mammoth bronze mural, 40ft x 140ft, depicting rural life in India, had adorned the lobby at Vigyan Bhawan in New Delhi for two decades, but was pulled down one day. The remnants of the sculpture were consigned to a storeroom. Sehgal dragged the Government of India to court. A 13-year battle followed. In 2005, the Delhi High Court asserted that the artist has a ‘right to preserve, protect and nurture his creations through his moral rights’. Sehgal was given the remains of the mural. ‘Amarnath Sehgal Vs the Union of India’ became a landmark case, the artist’s biggest contribution to the art world in India.

Keen to meet Indian youth wherever he went and engage them in nation-building, Independent India’s first Prime Minister Jawaharlal Nehru happened to meet Amarnath Sehgal, a budding artist, in New York. He urged Sehgal to return to India and work for his own young nation. And Sehgal did, in 1953 — working on a project steered towards reviving folk and tribal art in the villages of Punjab (now in Haryana). Later, Nehru gave him land for making a studio at Jangpura, which has now been converted into a museum by his family.

Sehgal, whose birth centenary is being celebrated this year, was India’s leading modernist sculptor at a time when, to quote Marg magazine, new objective sculpture was yet to come to India. During Partition, Sehgal (born on February 5, 1922) was forced to leave Campbellpur, now in Pakistan, for India, along with his family. After living in the Kullu valley for two years, Sehgal moved to New York for further studies in art.

However, the horrors of Partition stayed with him, reflecting in his work throughout his career. His sculptures, figures seamlessly merging into each other, never fail to stir and shake — whether it is representation of extreme despair and devastation in ‘Cries Unheard’ or depiction of brutality in ‘Tyranny of Colonialism’. In a monograph, artist-critic Pran Nath Mago quoted Sehgal as saying: “The turmoil of the days of Partition was so great that I could never be indifferent to the pain and suffering of my work.” Mandira Row, resident curator of the Amarnath Sehgal Private Collection in Delhi, says the artist’s life-size sculptures depict pain and sheer hopelessness in their faces and bodies.

Sehgal’s work was not just showcased across the country, but went on to adorn public spaces all over the world. His 7-foot bronze sculpture, ‘To Space Unknown’, was presented by the Indian government to USSR. In 1971, the monumental ‘Anguished Cries’ was inaugurated in West Berlin. In 1973, a bronze bust of Mahatma Gandhi was installed at a park in Luxembourg. The work was stolen a few years later, but Sehgal soon made a replica.

“As an artist, he worked hard in trying to be better understood by people. He would tirelessly work on his exhibitions to bring them to people to see and react to. He always felt that art should be provocative and should provoke a reaction, whatever it may be, positive or negative,” says Rajan Sehgal, his younger son.

Perhaps that is why the mutilation of the mural at Vigyan Bhawan had left him deeply hurt. In an interview with filmmaker Rajiv Mehrotra, he said that though public art is owned by society, an artist has a moral right to ensure that his work is not destroyed. “When a work… on which I spent almost five years of my life, is pulled out of the wall, broken and shattered, one feels very hurt.”

Rajan, to whom Amarnath Sehgal left his studio, says his father was never fully satisfied and always kept trying to better himself and his creations. “At times, he was frustrated when he was unable to get across what he wanted to say, but laboured hard to get to that point. He would often go back to his paintings and rework them. However, that was not possible in the case of his bronzes.” Row says Sehgal enjoyed the ductile, susceptible nature of bronze that, in its liquid form, allowed him to create freely, but once solid, would remain eternal and strong. Which is why most of his sculptures are in bronze. However, he worked in materials like plaster, ceramic, terracotta, wood, stone and gold, too.

A museum, the first of its kind in India dedicated to an artist, was opened at his studio in Delhi in 2019. It is dedicated to creating a dialogue between the past and the present. On the cards is a retrospective show based on the multiple mediums he dabbled with. And most importantly, his story. As Row says: “We want to tell people about the struggle of a single artist in a world that may have accepted his art but not understood him completely. We aim to lay out six decades of his tireless devotion to the field of art.”

Incidentally, it is at this studio where he breathed his last in 2007.