As the humble bicycle makes the transition to a wellness essential post the pandemic, premium and electric bikes are pedalling growth of Indian industry 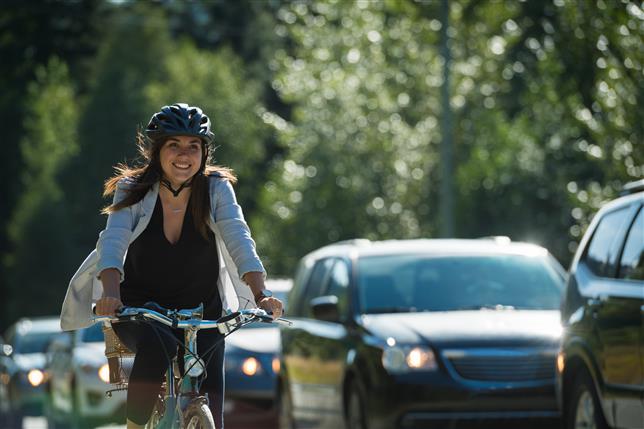 When 75-year-old Gurdeepak Kaur rides her seven-gear Trek bicycle on the roads of Chandigarh and around, all eyes move in her direction. This spirited woman, who enjoys her golf sessions just as well, started cycling about five years back. This passion has led her to cycle up to places like Fatehgarh Sahib, a distance of 43 km, and uphill till Dharampur (50 km). “Cycling is the best exercise our body can get. It keeps one fit and young at heart. The best part is that you can do it irrespective of the weather,” says Gurdeepak, adding that “not even a pandemic could stop you from cycling”. 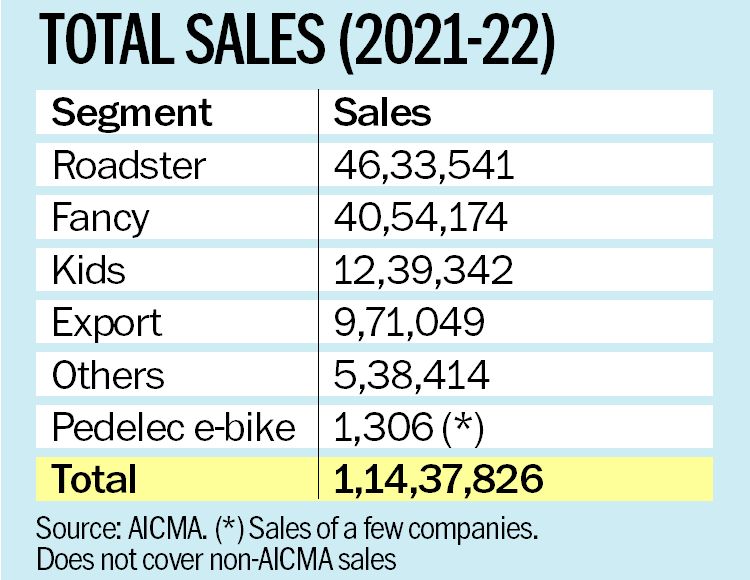 For entrepreneur Manish Nagpal of Mohali (49), buying a fat-tyre bicycle — meant for riding on snow or sand — for fitness was something that he was initially sceptical about. “But then, I didn’t want to be stuck in a gym full of people, not with the Covid scare still high. Riding a fat-tyre bike on the plains is a lot of hard work. It is like doing a set of weights, along with cardio. Hopefully, it’ll help me fulfil my fitness goals.”

If there is one factor that has singlehandedly given impetus to the premium bicycle segment, it is the pandemic. Earlier, light and geared cycles had little market presence, limited to sports and recreation cycling. The non-geared black bicycles or roadsters have dominated the Indian bicycle market owing to government/institutional purchases.

The KPMG report of June 2021 states that at an annual production of 2.2 crore, India is the second largest producer of bicycles. A year earlier, NITI Aayog mentioned the huge gap in bicycle usage. The bicycle ownership per 1,000 persons in India is a meagre 90 compared to China’s 300, Japan’s 700 and the Netherlands’ 1,000.

The pandemic seems to have changed it all. According to the All India Cycle Manufacturers Association (AICMA), a total of 41,80,945 bicycles were sold in the country from May to September 2020. With the sale of premium bicycles going up by more than 100 per cent, people had to wait to buy their favourite bicycles. The humble black bicycle had metamorphosed itself into a fitness essential. The latest entrant is the electric bicycle or e-bike. “At present, the demand for e-bikes is driven mostly by students and office commuters,” says Tiijwant Pahwa of the sales portal worldofcycles, adding that he gets 10 to 12 queries each day while around 10 are sold in a month.

When everyone wanted a bicycle

“Covid was an eye-opener,” says Capt Umesh Mudgal, owner of Panchkula-based Crossbow Sports. “The health awareness it brought, coupled with restrictions on swimming pools and gyms, saw a spurt in the sale of mid-range and high-end bicycles. Sales have come down a little of late but the demand has stabilised. The sport is now finding serious takers among those who consider it a viable alternative to workout in a gym,” he adds.

Ajay Pathania, sales store incharge at Phirki, Chandigarh, attributes the increase in the sale of premium bicycles to the easy availability of finance. “With companies like Bajaj Finance and HDFC offering easy loans, people no longer hesitate to spend even Rs 4-5 lakh to buy imported bicycles, which cost more than double the Indian bicycles in this segment.”

While the traditional single-gear cycle would start from around Rs 3,000, the mid-range geared bike starts from Rs 10,000-15,000 and the premium segment can start from Rs 25,000-40,000, with the high-end ones going up to Rs 7-10 lakh. According to Abhishek Kashyap of The Bike Store, Hoshiarpur, “The usual age of those going in for premium bicycles is 35 years and above. This buyer has the spending power and is willing to experiment with long distance routes, go off-roading or mountain biking. A comfortable ride is the key factor here.”

Cycle companies are realising the potential of this emerging market. India’s bicycle industry is pedalling to a decadal high demand growth of more than 20 per cent for premium and kids range, says a Crisil report. The KPMG analysis has predicted a potential increase in market size by four times in 10 years. According to KB Thakur, secretary general of the AICMA, the Indian industry proposes to make 60 lakh premium and 30 lakh electric bicycles by 2030.

To cash in on the rising demand, popular international brands like Giant, Trek, Firefox, Scott, Raleigh and Bergamont have brought their cycles in different cost ranges. Meanwhile, the Indian bicycle industry, 80 per cent of which is based in Punjab, suffers from a major technological gap. Most manufacturers are using first-generation steel frames while imported cycles come in much lighter Al alloy, carbon fibre and titanium.

Says Shagzil Khan of Szel cycles, an Indian cycle manufacturing unit based in Kochi, “Using reverse engineering, a lot of Indian brands have started making quality cycles that can compete with international standards, but the cost comes out to be much more since most of the raw material has to be imported.”

The demand for premium versions indicates the acceptance bicycles are finally getting from all sections, says Onkar Singh Pahwa, CMD of Ludhiana-based Avon Cycles. However, very few Indian cities have proper cycling tracks, he says, adding that “unless we have safe cycling zones, we cannot have a cycling culture like Europe”.

SK Rai, Vice-Chairman and Managing Director (Works) of Hero Cycles, Ludhiana, concurs. He says that while many cyclists came out on roads during Covid since there was no traffic or pollution, once the restrictions were lifted, the congestion on roads and inadequate infrastructure have made cycling difficult.

The ill-lit cycle tracks make it difficult for women cyclists to venture out late in the evening, says Sameera Auluck, a Ludhiana-based cyclist who often goes for cross-country rides. She recalls many stalking incidents she had to face as a lone rider.

“There are no proper cycle parking stands in most markets or office buildings,” says Pawan Kwatra of Darshan Cycles, Chandigarh. Due to no parking option, the fear of theft remains high, he adds.

The rising fuel price due to the Ukraine war is making cycling a viable option for everyone. In its report, The Energy and Resources Institute (TERI) had mentioned that cycling for shorter distances can result in an annual benefit of Rs 1.8 trillion to the Indian economy.

“The paradigm needs to shift to sustainable urban mobility eventually. Sooner it is done, the better it will be,” says Dr Thakur, adding that “cycling is the best solution to most problems in our cities today. You save on fuel, avoid traffic congestion, no noise or air pollution, more employment opportunities, besides better health.” It can do wonders in the long run to cyclists, cities and our country, he concludes.

Premium bikes: Made from specialty materials like high-grade aluminium alloy, carbon fibre and titanium, this segment comprises hybrid, racing, adventure, MTB (mountain terrain bikes), fat-tyre bikes, etc. The price range starts from Rs 25,000 and can go up to Rs 10 lakh depending on the features.

E-bikes: The e-bikes have seen a 100 per cent growth with the demand being to handle everyday commuting. These start from as low as Rs 25,000 and go up to Rs 2 lakh. The demand for e-bikes, which come in two propulsions, pedal and throttle assist, is growing in cities like Chandigarh, Delhi, Mumbai, Pune and Bengaluru, which have good cycling infrastructure.