The year-long agitation at Delhi borders may have been a resounding success, but the challenges at home weigh heavy 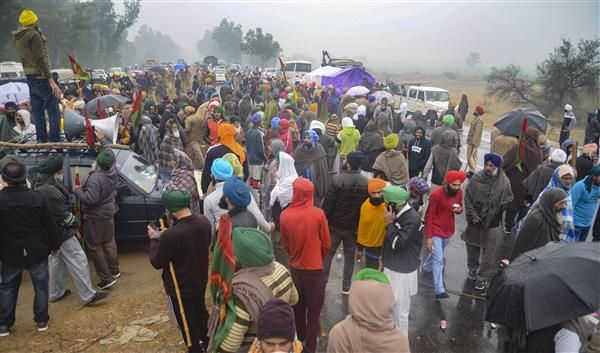 Farmers protesting on the route taken by the Prime Minister's cavalcade in Ferozepur on January 5. PTI

It’s for the first time in his lifetime that he has seen politicians taking such a keen interest in the farming sector, says 43-year-old Major Singh from Badrukhan village in Sangrur, one of the Punjab districts that saw participation in large numbers at the protest sites on the Delhi borders, demanding repeal of the three contentious farm laws. “This time, the farmers would decide the future course of Punjab politics,” he is confident.

Peaceful protest is the democratic right of farmers and the Centre and the BJP are making a hue and cry to cover up the flop show at the Ferozepur rally, says Sukhdev Singh Kokri, state general secretary of BKU-Ugrahan, on the controversy surrounding the Prime Minister’s visit to Punjab on January 5. Farmers’ unions, he claims, had no plan to hold a demonstration to block his movement. “However, even if due to the demonstration he had to stop for 10 minutes, how does it become a security breach? An attempt is being made to build a false narrative of Punjab versus the country.”

Rajinder Singh Deep Singhwala, senior vice-president of Kirti Kisan Union, says it is “nothing but an attempt to create an anti-Punjab atmosphere”. It is clear from the videos, he says, that the people around the PM’s vehicle were not farmers but BJP activists with the party flag. “Unfortunately, some Punjab leaders, too, have became party to the BJP’s false propaganda.”

Gurbaz Singh, 45, from Longowal is as upbeat. “The agitation was the first of its kind. Apart from awakening farmers across the country, it has compelled political parties and politics to revolve around farming,” he says.

‘We have lifted our dharna’

Since the Punjab government has started taking action to fulfil our demands, we have lifted our protests in front of DC offices. But we would again start indefinite protests if in future it tries to delay action on demands which have already been accepted — Sukhdev Singh Kokri Kalan, BKU-Ugrahan

It was for the first time that women from rural Punjab played a huge role in the success of such an agitation. They shouldered the responsibility on the Delhi borders, back home, and will continue to do so. They are equal stakeholders on issues that concern farmers. — Parmjit Kaur Longowal, Zameen Prapti committee

Our year-long agitation at the Delhi borders has created a new scope for non-electoral struggles. We don’t want to lose that momentum. What will we get by participating in elections, and having one or two MLAs from amongst those who were in the forefront of the protests? — Rajinder Singh Deep Singhwala, Kirti Kisan Union

Sukhwinder Singh from Kulara shares the confidence after the success of the year-long agitation, but draws a clear distinction between supporting the movement and those keen to plunge into politics: “There are many politicians whose properties have increased manifold even though they do not work. Our landholdings are shrinking despite our hard work. But politics is a dirty game. No one with a clean image wants to join it. I feel farm unions deciding to contest Assembly elections is neither required, nor feasible.”

Malkiat Lakhmirwala, secretary of BKU-Rajewal, is aware of the disapproving stares of many farmers who have returned home after the Delhi protests, but is convinced of his own understanding of the situation. “Political parties,” he says, “have failed to help us. We have decided to contest elections solely for the welfare of farmers; only they can take decisions for the betterment of their fraternity. We are confident that after winning, farmers would be able to devise pro-farmer policies.”

Manpreet Singh Namol, spokesman of the Sanyukt Sangharsh Party floated by Haryana BKU leader Gurnam Singh Charuni, is in complete agreement. “After winning, all parties forget farmers. This time, we are determined to have farmers as MLAs to raise our voice in the Punjab Assembly. Farmers can compel the government to fulfil their demands only by joining politics,” he feels.

Jagrup Singh Sekhon, a retired proferssor of political science at GNDU, Amritsar, has been meeting farmers during the protest and after their return and senses a perceptible change. They seem to have a clear vision about what needs to be done to save farming, he says.

“The movement looks like a prelude to big structural changes in the agricultural sector. In layman terminology, the repeal of the laws was just a trailer, film to abhi baaki hai. Farmers have shown the strength of their political existence through the massive socialisation. The voice of the farmer of today is based on facts; he is better educated, more aware and rational. Farmers are now a big organised group and can impact election results. The growth of the movement has redefined their existence as producers of national wealth,” he says.

The political arena, for several farmer leaders, thus, is a natural corollary. Twenty-two farmer organisations which were a part of the Samyukt Kisan Morcha (SKM) that spearheaded the agitation have floated their own outfit, Samyukt Samaj Morcha, announcing that they will contest all the 117 seats in the Punjab Assembly elections, with Balbir Singh Rajewal as the face of the front.

Many farmers’ organisations in SKM, however, have decided to stick to their stand that identifying with any party or contesting polls would blunt the struggle. No political leader was allowed to speak from the stage of SKM. “This struggle has created a new scope for non-electoral struggles. We don’t want to lose that. What will we get by participating in elections, and having one or two MLAs?” asks Rajinder Singh Deep Singhwala of Kirti Kisan Union.

As a young farmer leader, addressing a gathering at Tikri, asserted, “Had we gone through the electoral route, we would have required 275 MPs in the Lok Sabha and 123 in the Rajya Sabha to repeal the laws. But our movement was spread in just 35-odd Lok Sabha seats. See what wonders people’s power can do!”

Many farmers, too, still can’t wrap their head around charting a whole new course given the impact the movement has had. Ajaib Singh, an elderly farmer from Jakhepal village in Sangrur, wants the focus to remain on the gains of the agitation: “Earlier, only Punjab farmers used to take up cudgels. Now, we have a united voice. We have realised our strength. We held our ground, and we were heard. We matter. The realisation is of deep significance.” Why politics then, he questions.

A key contribution of the prolonged agitation has been a critical study and decoding of government schemes and assurances ostensibly meant for the farmers’ benefit. Back in villages, the protesting farmers are now anxious for a visible change beyond the rhetoric.

“Repeal of laws does not solve any problem at the ground level. We need things to move,” stresses Jaspal Singh from Mansa. “Our entire family actively participated in the protests, but it’s high time the authorities seriously look at the problems of marginal and small farmers,” adds Gurbaksh Singh of Nandgarh village, also in the same district.

Gurnam Singh, 60, from Bathinda says the real issues are still to be addressed. “Make guaranteed support price a legal right, extend it to cover a wider range of crops. Forget politics and elections, just do something for us farmers,” says Gursewak Singh of Jhunir in Mansa.

“You think we don’t care about the ecological consequences of growing paddy, but when procurement is assured for only a few crops, the choices are very limited. Give us minimum support price, we will grow pulses, other crops. The problems of the dwindling underground water, soil health and stubble burning will all be addressed. Why is it so difficult?” asks an agitated Gurpreet Singh.

“Who wants to be labelled as a defaulter?” says Jaswinder Singh from Maidewal in Sangrur. “But we do not have any option. The input costs have increased, our children are without jobs even after completing the mandatory education. Majority of farmers I know want to repay the debt, but they should at least have the sources of income to repay.” The exodus of youngsters to other countries, he adds, is not some fad. “There are no jobs, and the farms cannot support the children. It’s a huge challenge for farmers. Provide jobs, make farming lucrative and they will stay, and toil.”

The agitation saw farmers of all groups participate in equal numbers, but Harbhajan Singh from Chhajli in Sangrur points to the harsh reality: “The youth see no future in farming and their one and only plan is to go abroad. Look at our plight, indebted and children leaving.”

Bikkar Singh, both of whose sons have gone to Canada on a study visa, had to borrow money to send them, apart from the farm loan. “We can derive satisfaction that we compelled the Centre to repeal the laws, but there is no denying that the future of farming is bleak. My wife wants to sell land to repay the debt, but how can I sell the fields bought by my father and grandfather with their hard work? It is plain injustice,” he says. “Politics is a big no, but I am all for continuing our struggle for a better deal,” he adds.

“We sat at the Delhi borders for a year, and now we are sitting outside the Deputy Commissioner offices of Punjab. Our demands are not new, our resolve is. We are not asking for alms, just our rights. We are acutely aware that nothing would come our way without an agitation. If that is what is required, we will sit peacefully. Let the government test our patience,” says Niranjan Singh, a farmer from Phalera village.

Singh incidentally had completed his industrial training diploma in 1992, but took to farming after failing to get a job, a switch his father was keen on, considering the hard life he could foresee in the farming sector.

Chandigarh-based Institute for Development and Communication Director Pramod Kumar feels the signals make it apparent that the farmers will carry on with their agitation till they are able to have the Centre look into the several issues plaguing the farming sector, and that would require an honest interface. Now, with a section of farmers deciding to join the political bandwagon, he says, “they will be concentrating more on the supply side: the supply of promises”. That’s easier said than done, proven time and again by the political parties.