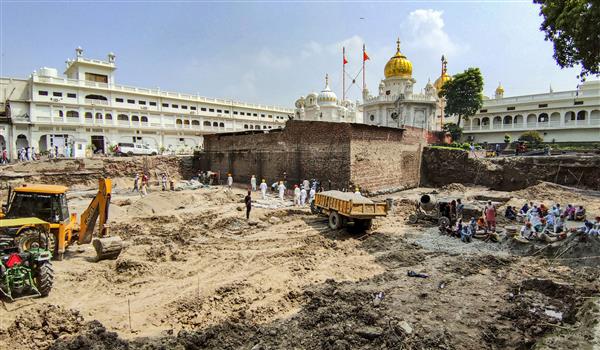 Work in progress at the construction site where some old structures were unearthed while digging on the periphery of the Harmandir Sahib complex. Photo: PTI

One of the enduring images in my mind is of people from Amritsar and beyond performing kar sewa at Harmandir Sahib in 1973. Many were dressed up in their finery for the occasion and would patiently wait for the fellow sewadars to put in the mud from the sarovar and carry it away, often by placing the tasla, the shallow iron container, on their heads.

The desilting was an affirmation of the inclusive tradition of sewa, in which all who took part felt honoured to have done so. There was no hurry. It was participative and involved people at large. Mechanical means were eschewed for the privilege of performing physical sewa, even by those whose socio-economic status virtually ensured that this was the only time they would be doing such work personally. Indeed, there are pictures of bejewelled maharajas of yore performing kar sewa with taslas on their heads.

A recent image of a JCB looming large over a structure made of Nanakshahi bricks was disturbing at many levels. It contrasted with the traditional notion of kar sewa. It also demonstrated a cavalier attitude towards tradition, antiquity, and heritage.

Harmandir Sahib is at the centre of a many-layered complex. It served as a centre of learning where many bungas were situated. Built by various misls, they provided military fortifications, educational centres and housing for pilgrims. The bazaars around had the Gurus’ blessings. Over years, changes have taken place, and mostly they have been in consonance with what has existed for centuries. As time passes, new requirements are to be expected. But, there should be no unholy hurry to effect the change.

The Shiromani Gurdwara Parbandhak Committee is entrusted with taking care of these historic gurdwaras, but instead of involving the wider sangat, kar sewa has often been entrusted to various sants, some of whom have been found lacking.

The Sikhs are in an enviable position of having many tangible articles of heritage preserved among the devotees and institutions. However, as far as historic buildings go, the urge to modernise has cost us dear. In April 2019, local devotees and organisations had risen in protest when a part of the Darshani Deori of Gurdwara Darbar Sahib in Tarn Taran was demolished. It was a welcome public assertion.

An attitudinal change is to be effected, in which gurdwaras are seen as repositories of heritage, and thus the need to preserve and protect. A gurdwara reflected the local flavour, even as it followed the basic structure that was adopted by all. The diversity of expression in embellishments enriched the heritage as reflected in the styles, and even the colours of buildings. The Nanakshahi bricks, as seen in the Darshani Deori at Tarn Taran, and also the recently excavated portion in Amritsar are tangible links to history. These building blocks of magnificent structures need care, respect and consideration. The focus should be on preservation, not demolition. JCBs and crowbars should not be allowed to run amuck.

The Covid pandemic has brought the aspect of sewa to the fore, and indeed has triggered a rethink on the various roles of gurdwaras. Recently, there has been a movement to turn the gold collected into endeavours related to education and health. We have excellent examples of individual and institutional efforts that have yielded great results. The fresh impetus would have a positive effect.

Indeed, gurdwaras have always served as educational centres. The much-quoted ‘History of Indigenous Education in the Punjab’ by the Hungarian-origin Orientalist, Gottlieb Wilhelm Leitner, rightly speaks of Gurmukhi being taught at the Golden Temple, at various bungas around it and indeed in religious institutions of followers of other religions.

The SGPC supports many educational institutions. Now is the time to step up for a dynamic approach that provides the people what they need and supplement the educational facilities with digital and other means. Similarly, the expansion of health services, especially seen in the manner in which gurdwaras became focal points of Covid relief, is laudable, and necessary. The catholicity of thought that allows such work would need to be grounded in the gurdwara tradition and of a heritage that needs to be preserved. It is a shared heritage of the people of the region, no matter where they live.