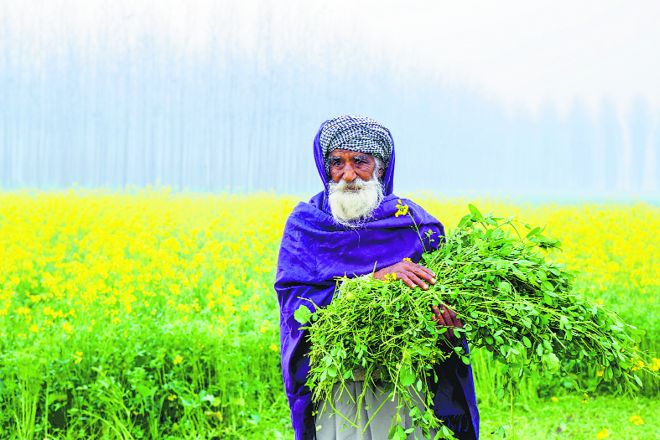 The Punjab Government is spending just 18 per cent of the Budget on schemes that can boost agricultural production.

HERE are no new schemes for the crisis-ridden agriculture sector, or for the welfare of farmers, in the Punjab Budget for 2020-21. The dependence on Centrally sponsored schemes — Rashtriya Krishi Vikas Yojana, National Horticulture Mission, Pradhan Mantri Krishi Sinchai Yojana etc. — is all too visible, even as the state government is spending just 18 per cent of the Budget on schemes that can boost agricultural production and help the state overcome sluggish growth in the farm sector.

Being an agrarian state, Punjab has always accorded high budgetary allocation for agriculture and allied services. This time, Finance Minister Manpreet Singh Badal has set aside Rs 12,526 crore for this sector. The amount is surpassed only by the allocation for the education sector. A closer perusal of the Budget reveals that 82 per cent (Rs 10,375 crore) of this money is for the payment of subsidy for free power to farmers; the Congress government’s flagship Agriculture Debt Waiver and Debt Relief Scheme; and the Crop Residue Management Scheme.

The free power to farmers will cost Rs 8,275 crore; Rs 2,000 crore has been set aside for the Debt Waiver and Debt Relief Scheme, including Rs 520 crore for landless farm labourers. The outlay for the Crop Residue Management Scheme is Rs 100 crore, wherein Rs 100 per quintal is the subsidy to be given to farmers who desist from burning paddy straw. This leaves just Rs 2,000 crore for all other agriculture schemes and the committed liabilities of the Agriculture Department.

In the ongoing financial year, the Budget outlays were similar, with a major chunk for power subsidy and the debt waiver scheme. There was neither any capital nor investment expenditure in agriculture, which experts say is much needed to revive growth.

Balwinder Singh Sidhu, Commissioner, Agriculture, Punjab, says the government is well aware of the agrarian crisis that looms large over the state’s economy. “In spite of the limited resources, the state government is doing whatever it can to give breathing space to farmers,” he adds.

In a state severely hit by high rural indebtedness leading to high incidence of farmer suicides, the Finance Minister has announced that Rs 2,000 crore would be distributed among the families of farmers who ended their lives, under the Debt Waiver and Debt Relief Scheme. Till date, about Rs 4,700 crore has already been given. In the ongoing year, Rs 1,500 crore is being given to the landless farmers.

Provision has been made for agriculture colleges at Gurdaspur and Balachaur (by setting aside Rs 14 crore). A sum of Rs 10 crore has been set aside for establishing the Agriculture Marketing Innovation Research and Intelligence Centre at Mohali.

The Budget highlights the state government’s intent to pursue diversification of crops. Horticulture estates are to be set up at four places — a pear estate at Verka (Amritsar), a litchi estate at Sujanpur (Pathankot), a guava estate at Wajidpur (Patiala) and a horticulture estate at Kotkapura. A Centre of Excellence in Floriculture is also in the works at Doraha (Ludhiana), while the Veterinary Research Centre has been proposed to be set up at Sappanwali in Fazilka.

Manpreet also said in the Budget speech that the government would soon amend the Industrial and Business Development Policy-2017 to allow higher incentives to the food processing industry — other than paddy and beverages — to help create a market for horticulture crops, milk and animal husbandry products so as to enhance farmers’ income. To make Punjab’s agriculture more climate-sustainable, the Pani Bachao Paisa Kamao scheme is being strengthened, and emphasis is on solarisation of agricultural pumps.

However, there steps have failed to enthuse farmers. Balbir Singh Rajewal, president of the Bhartiya Kisan Union (Rajewal), says there is nothing in the Budget for agriculture. “It seems that the government is not concerned about what ails the sector. Our union had organised a discussion with all political parties in Punjab before the Budget session, wherein they had promised to provide us full support and even said that a special session on agriculture would be convened. State Congress president Sunil Jakhar had given this assurance, but his own party’s government gave farmers a raw deal in the Budget. There is an urgent need for capital expenditure and investment in this sector,” he says.

As part of the diversification plan, Rs 100 crore has been kept side for giving dues to cane growers; for the upgrade of two cooperative sugar mills — Gurdaspur and Batala — Rs 50 crore has been allocated. Jangveer Chauhan, a prominent cane grower and president of the Doaba Kisan Sangharsh Committee, says the amount is too less. “For three years, there has been no increase in the state-advised price of cane. Even the amount of Rs 100 crore is inadequate for next year, when during the ongoing cane crushing season, the government still owes cane farmers Rs 160 crore,” he rues.

No road map on unemployment

Agriculture economist Dr Lakhwinder Singh, who heads the Centre for Development Economics and Innovations Studies (CDEIS), Punjabi University, says the most important thing that the Budget should have done was to offer solutions to large-scale unemployment(rate of unemployment is 7.7 per cent in Punjab) in the agriculture sector and how to curb farmer suicides. “Both things have been ignored,” he says. “Even in terms of diversification, the emphasis is on maize, which is not a sustainable crop in Punjab.”