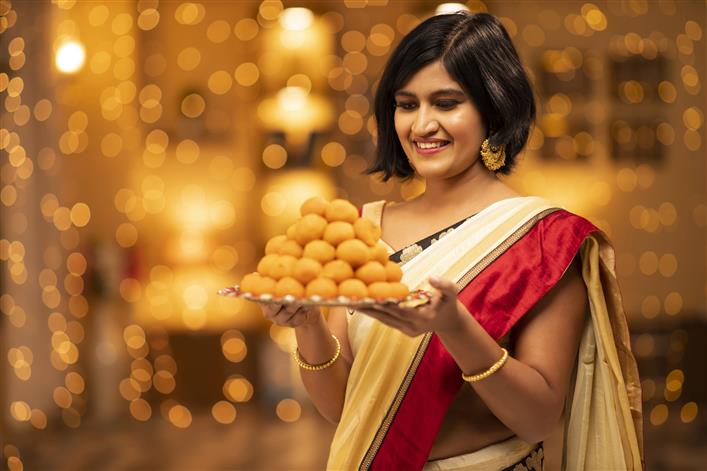 Conventional sweets and savouries associated with Diwali are not just meant for Lakshmi puja or festive hampers. These deep-fried mishthaan and pakwaan have a longer shelf life, marking the arrival of winter when the body requires energy and also has the ability to digest these

The Festival of Lights means different things to different revellers. For children, in times gone by, it was all about sparklers and crackers. Now, pollution woes and security concerns have put a dampener on these activities. Then there were those addicted to playing cards that had less to do with skill but if fortune favoured, the player could hit the jackpot. These parties started weeks before Diwali but with so many online temptations available all round the year now, these card parties, too, have lost their seductive charm.

What hasn’t changed, though, is splurging on sweets and savouries without any sense of guilt. This is the time to exchange Christmas-like hampers filled with delectable goodies — mithai and mewa, fruits fresh and dried, not to forget something salty and spicy to tickle the palate. Nowadays, this ritual is performed like a prescribed routine. Attractively wrapped boxes are picked up from the bazaar and handed out and received. What these are packed with is quite predictable as well: kaju katli, anjeer-dates barfi, laddoos tinged with saffron, made with kaju-badam paste and stuffed with gulkand, colourful, chewy Sindhi halwa and, maybe prohibitively expensive piste ki launj. Don’t get us wrong. We love all this stuff but as these assorted sweets disappear melting in the mouth, we are struck by a tsunami-like wave of nostalgia. Forgotten flavours tease us tantalisingly like spectral presences beyond reach.

Flavours from the past

When we were children, all the pakwaan and mishthaan were prepared at home. Pakwaan is well-cooked, deep fried food that has a really long shelf life and is considered free from pollution. Mishthaan, as its name indicates, combines sweetness with nourishment of cereals and grains. Here again, the emphasis is on a long shelf life. The chenna or mawa sweets that are still popular have to be consumed that very day. These don’t keep well even in the refrigerator. However, the whole idea of home-made sweets and savouries was to keep enjoying the delicacies long after the festival.

Kheer was prepared as naivedya for Mahalakshmi puja. But the prasad thaal was laden with laddoos of besan, sooji, nariyal, methi, til and many more ingredients that Ganeshji is fond of. Don’t forget that it is his idol that is placed along with Lakshmiji on this auspicious day. Then there were pua and sweet roat keeping company of batasha and kheel (puffed wheat). There were also shakar pare and khajur. Gujhiya is generally associated with Holi, but one does remember gujhiya filled with sooji, kishmish, grated nariyal, mishri and green cardamom seeds being deep fried on low heat around this time as well.

No one considered preparing these sweets a chore. It was a once-a-year opportunity to share recipes handed down generationally and to exchange gossip and family news. Old ladies would remind youngsters that they shouldn’t forget to make at least a small amount of family favourites or signature mithai. Making the flaky balushahi was not a challenge everyone could tackle, but some did pull it off miraculously. Khaja was more common. This multi-layered pastry — fried, not baked — is quite popular in Bihar, Jharkhand and Odisha but now it is more common to buy it from a halwai shop. Gulab jamun of the dry variety, much smaller than kala jamun, was also a great temptation.

What’s amazing is that almost all regions in India had a local mithai that had a pan-India following. Talking of halwa, Sindhi/Karachi/Bombay, it was prepared at home in southern India and called godhoom halwa. Godhoom is the Sanskrit word for wheat and this sweet is prepared with wheat germ. In Gujarat, draped in frozen ghee and syrup, ghaari and akhrot ka halwa are displayed on the shelves to lure those with a sweet tooth. In Karnataka, Mysore Pak occupies the position on the top of the heap. In Bengal, this is the season to enjoy the nolen gur — jaggery prepared with the sap of date palms. Joynagar moa is a unique laddoo that binds pounded rice flakes in chocolate-flavoured nolen gurher syrup. Among the sweets made at home in Bengal, one may also mention the tongue-shaped jibe goja. It is a crisp and crunchy desi sweet cookie that crumbles most pleasantly.

The variety of laddoos that were made at Diwali time was truly amazing. The recipes were based on the time-tested wisdom of Ayurveda. According to Ayurveda, the year is divided into two halves. Summer and rains are called grahan kaal when nature/weather saps or ‘takes back’ energy from our bodies. Autumn and winter are aadaan kaal when nature gifts/showers its bounties on us. The digestive fire is strong and we can digest and eat whatever we are offered. The body stores ‘surplus’ energy to be used in grahan kaal. Like pakwaan, mishthaan were tasty, condensed packages of energy.

Similar to seasons, ingredients of food are also believed to have intrinsic cooling and heating properties. This belief is shared in the Unani system of medicine. Gond (edible gum), methi daana (fenugreek seeds), sonth (dried ginger powder), saffron — all soup up the metabolism, besides tickling the palate. Sesame seeds, both black and white, as well as Ramdana (amaranth) in gur ki chashani were the hardiest of the lot. Extremely nutritious, they are rarely encountered outside village fairs nowadays in eastern UP and Bihar. In Punjab, it used to be pinni and panjiri, while in Rajasthan, aate ka laddoo performed the role of winter tonic for young and old.

The sweets that were exchanged were not all home-made though. Custom prescribed that any exotic sweet received or made at home also be shared with family and friends. In this category was Delhi ka sohan halwa (large tablet tasting like butter scotch and with jaw-locking traits, oozing ghee), Agre ka petha, Meerut ki gajjak, Lucknow ki rewari, Banaras ka madgal, Allahabad ki nukti, Jaunpur ki imarti, Almora ki baal mithai, Lonavala ki chikki — the list of famous traditional and regional festival drool-worthy offerings is quite long.

Even when mawa is used in some of the mishthaan, it is well cooked to remove all moisture and enhance shelf life. Baal mithai, Bhind ka jale khoye ka peda illustrate this. Jalebi is satisfying when just out of the hot karahi and dipped in syrup. Imarti, its more ornate avatar, can last a few days.

The not-so-affluent settled for gur patti laden with moongphali, while those who could afford would opt for no less than its fancier cousin, dry fruit-enriched thin squares. Rewari from the City of Nawabs was daintier and redolent of rose water while gajjak, whatever the geographical indicator, prided itself in its rustic robust personality. Madgal is a hybrid sweet, not quite halwa nor crumbled barfi, but intriguing and addictive. It’s prepared with urad daal, almonds and is fortified with aphrodisiac ingredients and has the shelf life of months. Petha was not the only preserve. Murrabbas made at home, seb and amla, added a personal touch to the Diwali hamper.

A time to savour savouries too

Not to be left behind were the pakwaan or savouries — khasta matthis, both large and small, could be relished at tea time or whenever pangs of hunger cried out for a mid-meal snack. Sadly, even these are bought readymade from stores selling branded stuff, proudly boasting about it as ‘export quality’. However, for us, these pale in comparison with what mother made at home in this nip-in-the-air season. Ditto for nimki and namak pare. There is also the miniature samosa packed not with potato but lentil paste that can survive for months. It is a pity that these, too, are on the verge of extinction in the home kitchen. A few professionals produce these ‘for export’, of course.

This is not meant to be a lament but a fervent appeal to revive and resurrect a tradition and preserve a priceless heritage. You don’t have to cook and distribute for an extended joint family nowadays. It will take very little effort to add your signature to the Diwali hampers for the few you love and care for. Do try out a few of the recipes, easy to master, and spread light and warmth. Happy Diwali!

Method: Dry roast moong lentils. Wash and keep aside. Boil 1- 1/4 cup of water in a pan, add moong daal, cook till done but not mushy. You may use a pressure cooker. Fry rasins and cashewnuts in a little ghee. Keep aside. Add coconut milk to lentils and bring to a gentle boil. Add grated jaggery. Stir. Add coconut cream. Remove from flame. Garnish with coconut slices, rasins and nuts. Sprinkle green cardamom seeds.

Note: Substitute milk and cream with easily available coconut milk and cream. In that case, convert jaggery into a syrup by melting it with some water. It should be added when milk is off the flame, otherwise milk may curdle.