Raj and DK: Men behind The Family Man 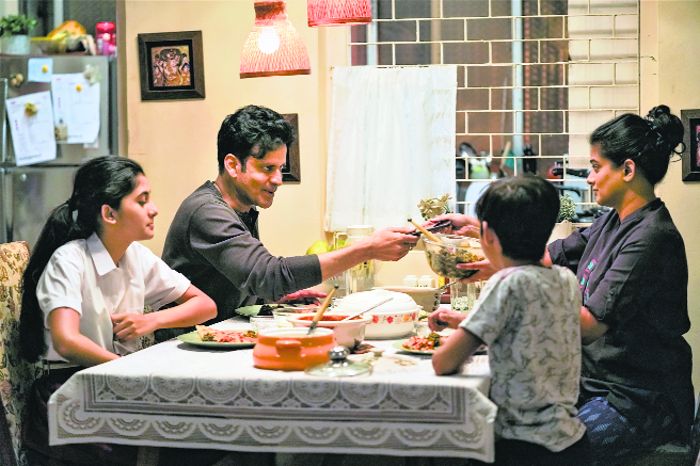 As an unusual family, the young Ashlesha Thakur, Manoj Bajpayee, Priyamani and Vedant Sinha have again struck a chord with the audience in The Family Man 2.

@BajpayeeManoj coming to a Netflix series! We love that you are a part of this family, man.# Ray

Can there be a bigger compliment than a rival streaming platform referring to your series to promote their own? That is the power of The Family Man, whose season 2 right now streaming on Amazon Prime has viewers in a thrall, critics in overdrive and social media in frenzy. Few series have received this kind of attention where viewers want to dissect every single plot detail, understand every conceivable twist and turn and are already agog with anticipation about the third outing of the series.

So who are these men behind The Family Man, who have found a desi spy in a simple unassuming family man, almost an antithesis to the suave martini-sipping Bond? Well, Raj and DK, as the duo is popularly known, are two Telugu boys, software engineers, who migrated to the US and decided to switch lanes more than a decade ago. If 12 years ago, nobody was ready to give them a chance, today their company D2R Indie is eager to give talented aspirants a platform.

In case you are still wondering what made Netflix tweet in favour of their series, their Telugu film Cinema Bandi has become the most popular film on Netflix, compelling the makers to tweet, “Here’s to Indie films”. Of course, their track record has always been stellar, especially in terms of critical acclaim. Their film Shor in the City won plaudits, even if it did not set the box office on fire. Whatever may be the BO verdict, clutter-breaking content has always been their USP. Be it the zombie film Go Goa Gone or 99, their cinema has always treaded the untried path.

Of course, it is with The Family Man that they truly struck gold, some would say found their metier and, undeniably, the much-deserved place under the sun. Spy genre isn’t new to the world or India; undercover agents have been the leitmotif of many films in India. But as the series dropped in 2019 without much fanfare and with an unlikely choice of a hero to play a spy, it totally eclipsed the much-hyped Red Chillies production Bard of Blood which released at the same time. Like its disarming hero Srikant Tiwari, who is as fallible as sharp, lies through his teeth, clued into the world and clueless about the goings-on inside his house, the series grew upon you beguilingly. Soon, it became a top contender, sweeping many an award function.

Second season, which dropped after a gap of two years, has surpassed viewership figures of the first season by leaps and bounds, an over-joyous Sharib Hashmi aka JK Talpade shares, “Would you believe it, fans are telling me how they have watched the season 2 thrice over in just a span of a week.” As he is going through laudatory messages, “If Srikant is the heart of The Family Man, you are its heartbeat,” he can’t deconstruct the success of The Family Man, “for there is no formula really”.

But on Raj and DK’s vision, he has a whole lot to say. First and foremost, he shares, “They are actors’ directors who know when to give a free hand and when to pull the strings. At no point do you feel there are two directors on the sets, and this time, there were three. Suparn Varma was such a welcome addition. The lightness of touch that pervades The Family Man is discernible on the sets and shooting is so much fun.” The same thought is echoed by Abhay Verma (Kalyan), “For them, comfort and happiness of the cast and crew come before shooting.” Sharib, while recalling his audition for the web-series when his character was a Basu and not a Talpade, agrees that inclusivity comes naturally to the makers who would go to any part of the country to cast the right actors. He says, “When was the last time you saw such beautiful Tamil actors in a mainstream Hindi project?” Sunny Hinduja (Milind of The Family Man), who calls them the dynamic duo, dittoes, “Only they can bring the diversity of our entire nation in one show.”

Of course, the series which stars Samantha Akkineni, a popular heroine of Telugu and Tamil cinema, has also brought them censure for depicting her in deep shades of brown. They have tried to dodge the criticism and justified it by insisting that after all it’s a Tamil actor playing a Tamil part. Besides, like her agile body language and training in martial arts, complexion is part of Samantha’s role as warrior Raji. While the ‘brown face’ controversy might stick somewhat, the makers have miraculously escaped another contentious debate which at one point threatened to flare into a full blown standoff. Prior to its release, the series ran into troubled waters for its perceived anti-Tamil bias. Now, it is being hailed for its sensitive and nuanced portrayal of Tamils. The character Chellam Sir (Udhayabhanu Maheswaran), who appears only for 15 minutes in the show, has gone viral. The possibility of a spinoff around him, a concept so far associated only with mega international shows like Game of Thrones, is in the air. Suparn Varma, who directed five episodes and is part of the writing team, however, has not committed to anything, not even whether Chellam Sir will be part of the third season, though the fine actor is open to both.

Whether the hype around The Family Man is justified or is it mere hoopla, there is no denying that Raj and DK have a universal appeal. While Sharib may not be a part of their next-web series starring Shahid Kapoor, he is confident we can only expect more edgy and quality stuff from the duo. As Talpade, who escapes many a brush with death, he would have easily died on screen. For if Raj and DK deemed it fit to kill his character, it had to be a killer move. To die for, that’s exactly what their actors and fans believe the duo is creating.

How it got bigger and better: Raj and DK

“We were fascinated with the idea that our spy would be more indigenous, grounded and a family man. We met many real-life officers and discovered that they are like all of us, only their jobs are way more important.”

“The Family Man season one was what one would call a sleeper hit. We were aware of the curse of the second season. Considering the weight of expectations and anticipation, we knew what we were up against. Thankfully, the story was written way before the release of season one and a good chunk had been shot too. With Suparn Varma on board to direct a few episodes and Tamil actors —each outperforming the other — the family grew bigger and better.”

“The only constant we believe in is change. We would love to jump on to various genres and up our game in the same genre and do something more than expected.”